Appraiser Ian Ehling discussed this Ray Bradbury archive with its current owner at the Santa Clara ROADSHOW in June 2014. Ehling gave the collection an insurance value of $12,000.
Support provided by: Learn more

In 1979, novelist Ray Bradbury learned that his favorite high school teacher had died. In response, he wrote a touching letter expressing his appreciation for her influence on him.

At the Santa Clara ROADSHOW in June 2014, Books & Manuscripts expert Ian Ehling appraised a collection of books by celebrated science fiction novelist Ray Bradbury, including Something Wicked This Way Comes, and The Martian Chronicles. Jennet Johnson, a relative of the archive's owner, had been an influential and much-loved English teacher of Bradbury's at Los Angeles High School in the 1930s. 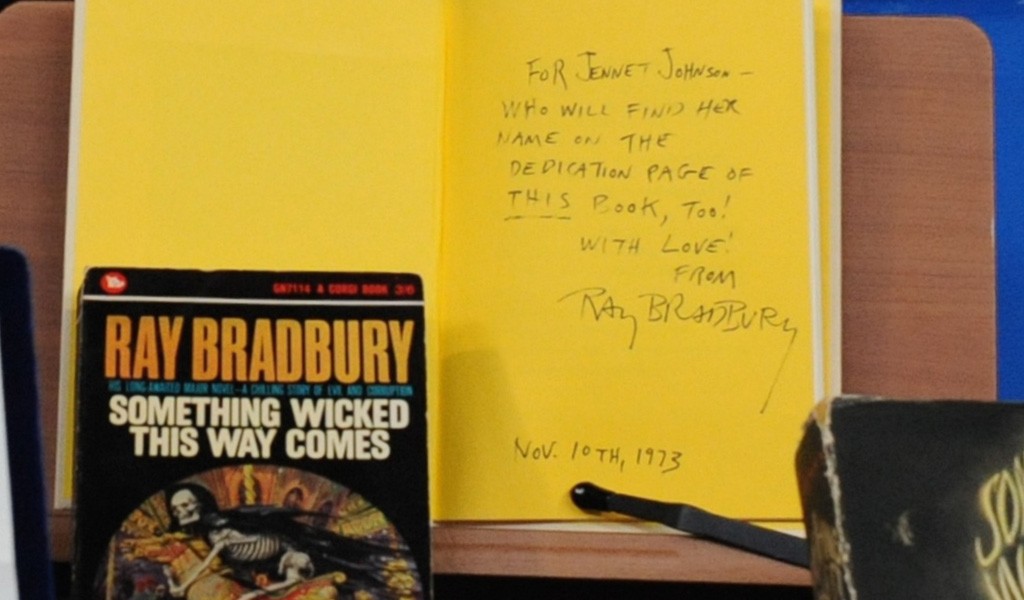 One of the personal inscriptions from Bradbury contained in the collection.

Best known for his 1953 dystopian novel Fahrenheit 451, Bradbury had sent copies of his books periodically to Ms. Johnson over nearly three decades, and the collection included a number of personal inscriptions from the author to his former teacher. One says simply, and powerfully, "To Jennet Johnson, who taught me how to write the short story."

One of the earliest reads, "CHRISTMAS WISHES FOR 1951 TO MISS JENNET JOHNSON — AND MANY THANKS AND UNENDING GRATITUDE FOR THE THINGS YOU TAUGHT ME WHEN I WAS 17 — THAT HAVE HELPED ME ALL DOWN THE YEARS IN MY WORK — MY BEST WISHES ALWAYS! FROM RAY BRADBURY L.A. HI. SUMMER '38"

Also preserved with the archive is an emotional letter from Bradbury, dated December 26, 1979, responding to the news that Jennet Johnson had recently died.

Taking the whole archive of books and letter into account, while noting that unfortunately it happens to lack a copy of Bradbury's most famous work, Ehling placed an insurance value on the collection of $12,000.

"Everything that teaching and the love of teaching ever was, she lived." — Ray Bradbury, of his high school English teacher, Jennet Johnson

You can read the full text of Bradbury's letter below. Ray Bradbury died in 2012.

Letter from Ray Bradbury to

Thank you for your Christmas note and the loving words you said about Jennet Johnson and her passing in the last week before Christmas. I wept, of course, but then quickly thought, as you did, of the goodness of this woman, and her influence on many, including myself. She was always and forever the friendly teacher, not the nagging one, no, but the gentle inquirer who asked after your reading health.

The list of authors she introduced me to is long and wondrous, including many fine women whose work very much influenced mine as the years passed.

The first time I heard THE MONKEY'S PAW it was from her lips one morning in the autumn of 1935, in her Short Story Class. It marked me. A tale, somewhat similar, can be found in my THE MARTIAN CHRONICLES, titled THE MARTIAN. Re-reading it, a few years ago, I saw how much the ghost of W.W. Jacobs, through Jennet Johnson, had stayed with me through the years.

Will you please drop me a note and tell me where Jennet is buried?

I would like to visit the place and bring flowers and talk to her one day soon. I know what her ghost will ask me: "Ray, what have you been reading, lately?" And I will have to answer.

God rest her dear spirit. Everything that teaching and the love of teaching ever was, she lived. Her honorary son tells you this. Again, thank you for your beautifully worded letter. 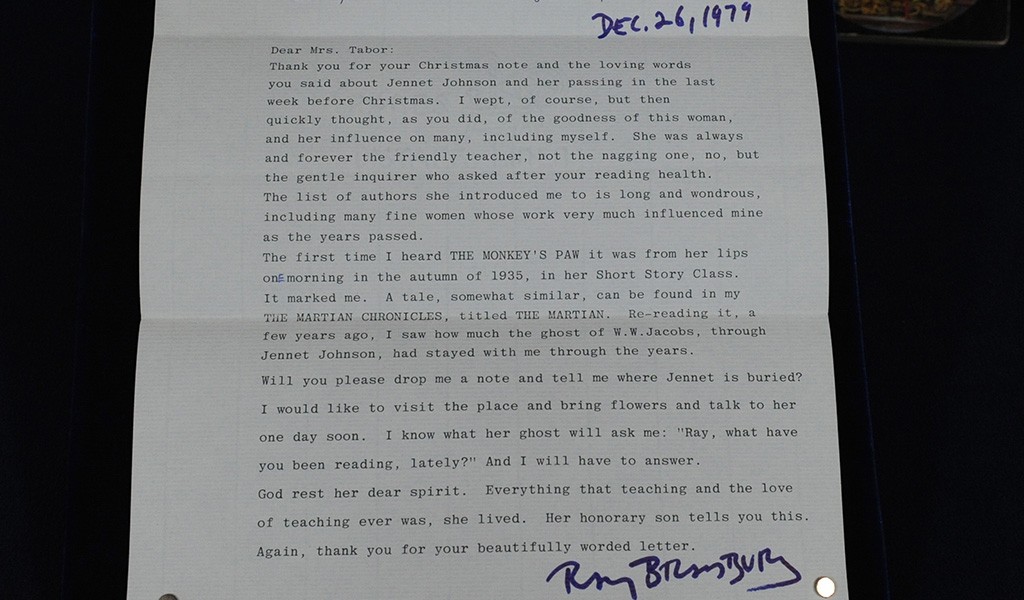 Bradbury wrote this heartfelt letter just after Christmas 1979 upon learning that his former teacher, Jennet Johnson, had died.