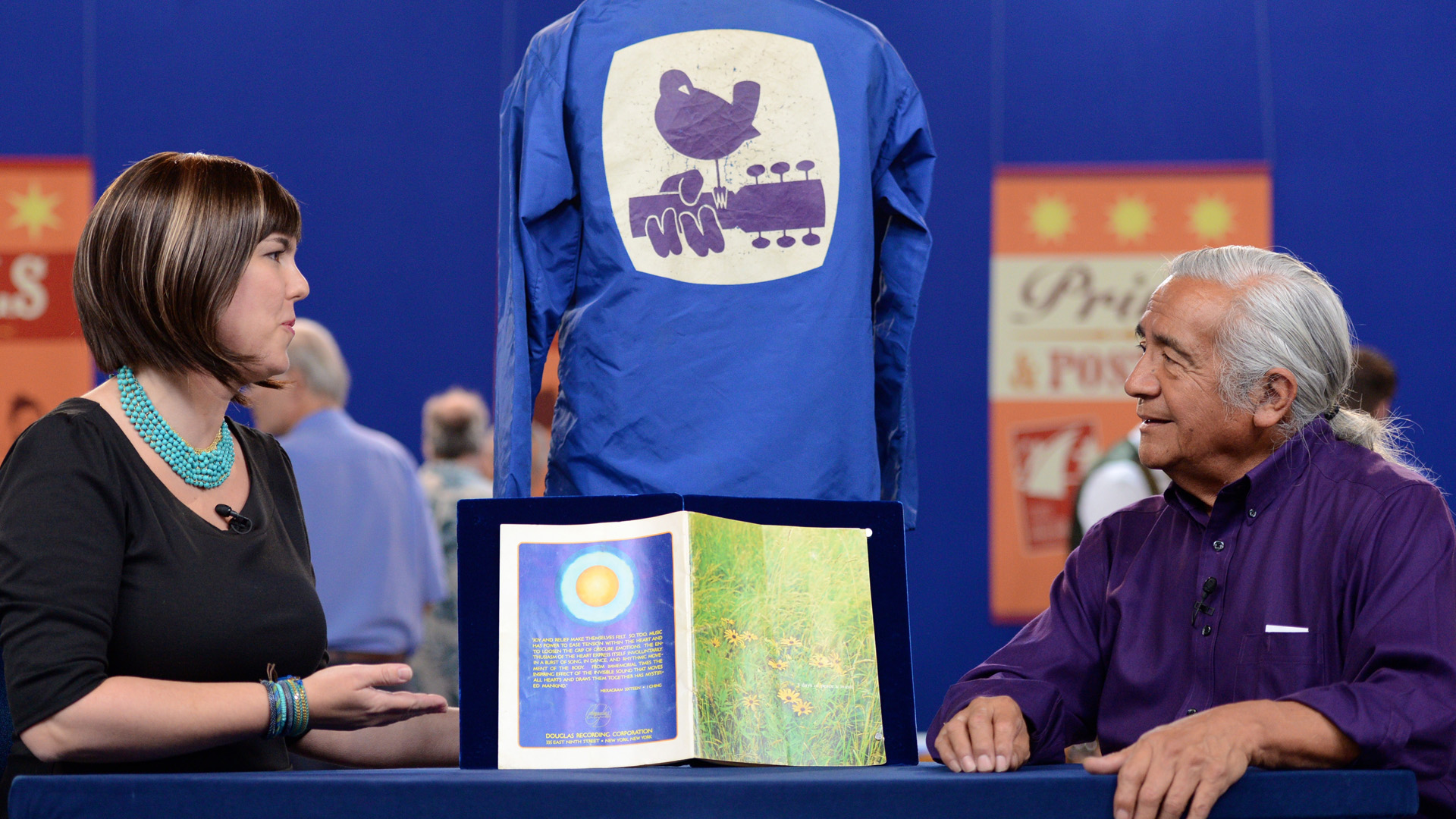 An event manager jacket and program from Woodstock came to the appraisal table in Albuquerque during ROADSHOW's 2014 visit. The owner of the two items shared his memories of seeing Hendrix play at Woodstock in 1969 with expert Laura Woolley.
Support provided by: Learn more

Jimi Hendrix's riffs soared across the Woodstock Music and Arts Festival in 1969. His headliner spot postponed by rain the night before, Hendrix's two-hour Monday-morning medley included "Purple Haze" and "Voodoo Child." But what most recall from the set was his solo performance of "The Star Spangled Banner," a visceral take on the national anthem that helped cement his legacy as a rock-and-roll legend.

Watch the appraisal from Albuquerque of Woodstock keepsakes. The guest reminisces about watching Hendrix play.

At the 2014 ANTIQUES ROADSHOW event in Albuquerque, New Mexico, a Woodstock attendee with a couple of keepsakes from the event recalled seeing Hendrix play. "We were 10, 15 feet away from him while he was playing … and then he started playing 'The Star-Spangled Banner,’ … it was incredible." After the concert ended, this ROADSHOW guest found an event manager jacket in the mud and hung onto a program to keep as souvenirs. There was no official merchandise at the event and most of the programs went largely undistributed. So when he brought these items to ANTIQUES ROADSHOW, he was pleased to learn from expert Laura Woolley that his possessions were worth $2,500 to $3,100 at auction. "The memories that you have from the event are worth more than anything you could put a dollar figure on," Woolley said. "Yeah, and I remember most of it, you know," our guest replied.

While the Albuquerque owner's memory of Hendrix playing at Woodstock is priceless, there is an entire field of collecting dedicated to Jimi Hendrix celebrity collectibles. In 2012, ANTIQUES ROADSHOW visited Seattle's EMP Museum with Woolley to take a look at some of the rock legend's iconic and eccentric outfits, including a pair of blue velvet pants he wore at Woodstock. "What's important for collectors is looking not only for documentation on provenance, but at what moment in their career they were wearing it," Woolley explained. “And Hendrix, the closing performer at Woodstock — that makes this one of the top pieces that you could possibly own of his.” The pants, Woolley continued, could go for an excess of six figures at auction.