Expert Karen Keane believes that this table from the June 2015 ANTIQUES ROADSHOW event has a history rooted in the triangular trade.
Support provided by: Learn more

Explainer: What Was the Triangular Trade?

During the June 2015 ROADSHOW in Spokane, Washington, a guest brought in a small table, dating from the early years of the 19th century. From the runnel around its edge, seemingly designed to catch liquid and prevent it from spilling onto the floor, the table seemed to have played a food-serving role of some kind. The owner conjectured it was intended to hold a joint of meat while it was being carved and served. Not so, said appraiser Karen Keane. Rather, it was designed for mixing alcoholic drinks, and with its original top, it may have commanded $5,000 at auction. Without it, given the otherwise good condition, Keane estimates an auction value between $2,000 and $3,000. 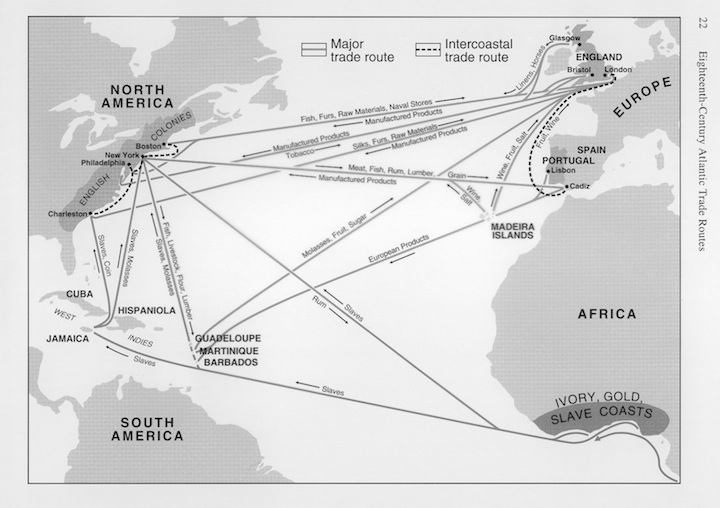 The triangular trade refers to a model for economic exchange among three markets. Historically, the triangular trade among Europe, West Africa and the New World ran on the backs of millions of enslaved people. Image source: web.horacemann.org

The table’s mahogany veneer, said Keane, probably derived from three-legged trade routes between Africa, New England, and the lands of Central America and the Caribbean, generally referred to as the triangular trade. The “triangular trade” was not a specific trade route, but a model for economic exchange among three markets.

A triangular trade among Europe, West Africa and the New World is probably the best known. Following the colonization of the New World by European powers, Europe experienced a prolonged economic boom for reasons that are, from the economist’s perspective, self-evident. Suddenly, the world was a much bigger place. Novel and instantly prized goods that only existed in the New World seemed to blink into existence: sugar, tobacco, hemp. European merchants could command high prices for selling these goods to other Europeans, just as New World merchants could command high prices from their customers for manufactured items from Europe. But a direct exchange of these goods, between Europe and the colonizers in the New World, required start-up money. Transporting goods by sea was not cheap.

A solution to this economic problem appeared in the form of the transatlantic slave trade, which began operating as early as the 15th century, at the very beginning of the colonial period. European ships would travel to West Africa carrying manufactured goods to which Africans had no access: worked metal, certain types of clothing, weapons. Once there, as payment they would demand people captured for slavery, who would be loaded onto crowded ships and transported to the Americas. (This leg of the trade scheme is usually called the "Middle Passage," a term that has become a byword for suffering.) Upon arrival, the enslaved Africans who survived the voyage were sold to landowners looking for cheap labor. With the money derived from these slave sales, European merchants would then purchase the cotton, sugar and tobacco their customers back home were demanding, and the cycle continued.

(It’s important to note that single ships did not necessarily make all three legs of this voyage. The triangular trade was not a route, but a strategy for making trade among distant markets easier and more profitable.)

At the same time, a different triangular trade route arose between New England, West Africa, and Central America and the Caribbean islands that lay east of it.

The islands of the Caribbean Sea served as sources for cane sugar and molasses, which New World merchants would distill into rum, while the mahogany veneer on the mixing table probably came from Guatemala or Honduras.

Rum and manufactured goods taken by New World merchants to Africa were sold in exchange for enslaved people. These slaves were taken to the New World and sold. Slavers used the proceeds to buy mahogany and molasses, and the cycle continued onward.

It is obviously not necessary that one leg of a triangular trade route should consist of enslaved people. Triangular trade routes still exist today, although globalization and air travel have made international trade much more efficient. But during the colonial period in the New World and, indeed, well beyond the 1808 Act of Congress that sought to end the import of slaves, the triangular route between New England, West Africa, and the lands of the Caribbean ran on slavery. When the Civil War decided America's slavery question for good, enslaved people finally disappeared from the structure of international trade destined for America. In the meantime, untold millions had suffered and died in bondage.

Author Ben Phelan
Ben Phelan is a freelance writer in Louisville, Kentucky. He has been a contributor to ANTIQUES ROADSHOW Online since 2007.
More from PBS