Stoneware Significance: It's in the Signature

When this stoneware keg first came to the Folk Art table at the Little Rock ROADSHOW in July 2015, Leigh Keno, Allan Katz and I were all quite taken with its unique shape, glaze, the wonderful snake, and of course the inscription along the bottom of the keg. While Leigh couldn’t completely make it out at the time, I later was able to decipher what looked to me like “by Jacob Backley” inscribed on the base. After we left Little Rock, and armed with that name, I went to work searching U.S. census records for Mr. Backley. 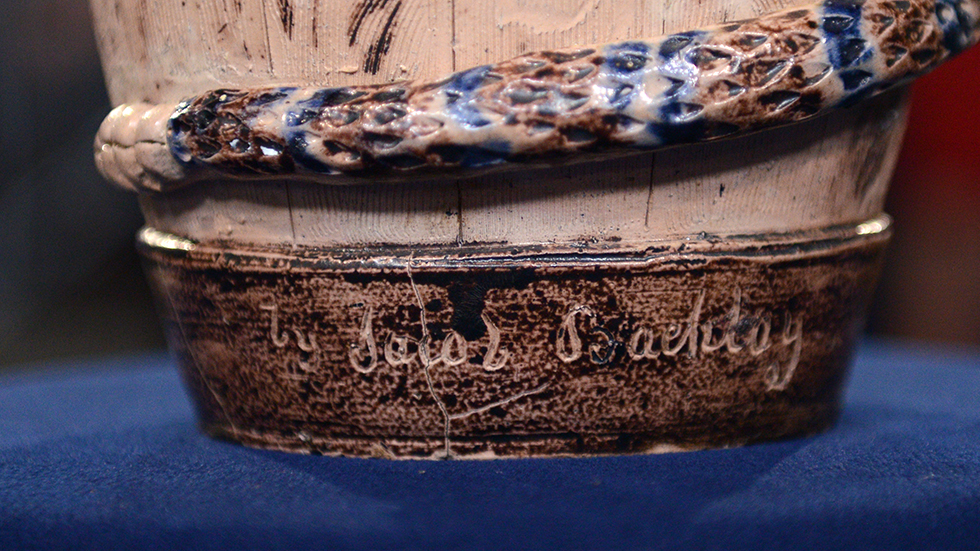 Expert Wes Cowan deciphered this signature and delved into searching for “Jacob Backley,” the maker of this keg.

While many 19th-century Americans were mindful of the purported evils of alcohol, the Temperance Movement gained widespread traction in the 1870s and 1880s, spawning plays such as Eight Nights in a Barroom, and leading to the publication of countless tracts, posters, ephemera — and graphic stoneware such as the Little Rock keg.

My search of federal census records from the 1870s failed to turn up anyone with the name “Jacob Backley” living in the U.S. But knowing that census-takers often made spelling mistakes, and that names were often transcribed inconsistently, I tried “Bachley” and “Bachle,” as well as other variations. No dice. Disappointed, I turned to the records for 1880, and bingo — I found a Jacob Backley living in Texarkana, Arkansas, and working as a “potter.” I had our man! The census records further revealed that he was unmarried, 40 years old, and had been born in France.

Finding a piece signed by the maker is the holy grail for stoneware collectors.

So why is the Little Rock keg so rare? First, finding a piece signed by the maker is the holy grail for stoneware collectors; individual potters rarely signed their work. Second, stoneware was made in practically every state, but virtually nothing is known about the industry in Arkansas during the 19th century. While other pieces have surfaced from Texarkana, they’re exceedingly rare. Finally, the piece is exceptionally finely crafted and detailed. No fewer than three different glazes were used in its manufacture, including dark brown, or “Albany,” slip for the barrel bands and details of the staves of the keg and the snake; cream for the background color, and cobalt blue for the scales of the serpent.

There are still lots of intriguing questions to be answered about this keg: When did Jacob Backley immigrate to the United States? Where did he learn his craft? As Leigh Keno has suggested, the keg is quite reminiscent of the stoneware of Cornwall and Wallace Kirkpatrick, of Anna, Illinois. Did Backley work at Anna Pottery before moving to Texarkana? Why is the work of the Texarkana pottery so uncommon? How long was stoneware being produced there?

Let’s get to work!

Armed with this signature reading “Jacob Backley”, expert Wes Cowan delved into the maker of this stoneware Temperance keg. Expert Leigh Keno gave this keg an auction estimate of $8,000 - $12,000 at the Little Rock ROADSHOW in July 2015. The front of the keg has “A whisky gauger” incised into the top.
Author Wes Cowan
Wes Cowan has appraised Folk Art, Decorative Arts, and Photographs for ANTIQUES ROADSHOW since its second season. He owns Cowan's Auctions, Inc., in Cincinnati, Ohio.
More from PBS