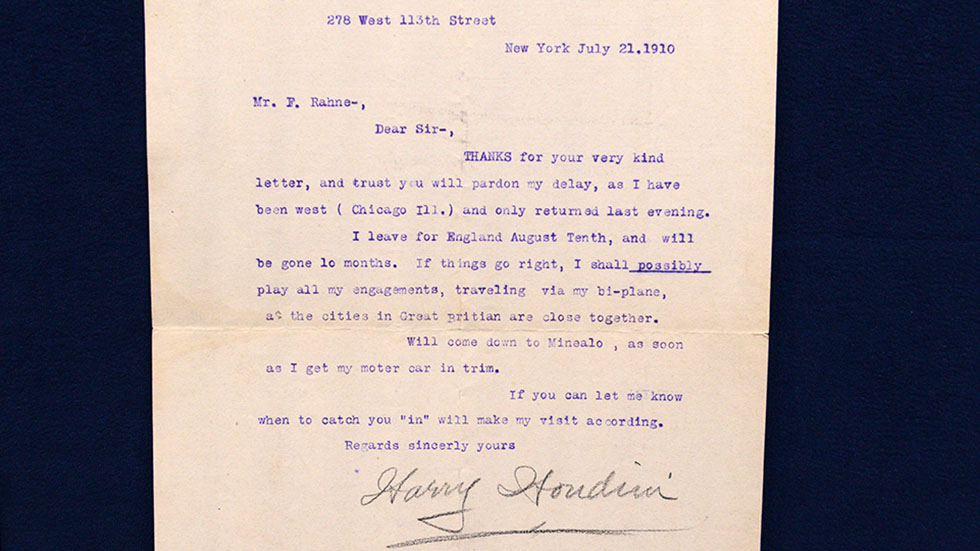 Do you have any ideas about the identity of the "Mr. F. Rahne" this 1910 Harry Houdini letter is addressed to?
Support provided by: Learn more

Who was Harry Houdini writing to in 1910? If you think you know who "Mr. F. Rahne" was, share your ideas in the Comments section below!

Amelia Earhart is widely revered — and rightly so — for her pioneering feats of aviation begun in the mid-1920s. But there is another, practically unknown, female aviator whose even earlier passion and daring were given some much-needed publicity during ROADSHOW's August 2016 visit to Palm Springs. John, a guest from Rosamond, California, showed appraiser Ken Sanders his ca. 1910 archive of aviation memorabilia once belonging to his great-grandmother, Bessica Raiche. (Watch the appraisal below.)

John told Sanders that by the first decade of the 20th century, Raiche — who was already a trained physician — "got the flying bug," designing and building a biplane herself. She made her first solo flight in 1908, becoming America's first female aviator.

John explained that Raiche eventually had to give up flying for her own health reasons, and returned to practicing medicine. She also subsequently underwent a divorce and John said her ex-husband destroyed many materials related to Raiche's aviation hobby, including the drawings and designs for her airplane.

Among John's collection of the surviving memorabilia was a letter written by Harry Houdini to one "Mr. F. Rahne" in 1910. Another apparently little-known bit of aviation trivia is the fact that Houdini, the famed magician and escape artist, was also a pilot. At the end of the letter Houdini boasts of being "THE FIRST SUCCESSFUL AVIATOR IN AUSTRALIA."

THANKS for your very kind letter, and trust you will pardon my delay, as I have been west (Chicago Ill.) and only returned last evening.

I leave for England August Tenth, and will be gone 10 months. If things go right, I shall *possibly* play all my engagements, traveling via my bi-plane, as the cities in Great Britian [sic] are close together.

Will come down to Minealo , as soon as I get my moter [sic] car in trim.

If you can let me know when to catch you "in" will make my visit according.

THE FIRST SUCCESSFUL AVIATOR IN AUSTRALIA

(Not much money in the title, but twas a lot of glory)

If you have any ideas, please share them with us in the Comments section below!