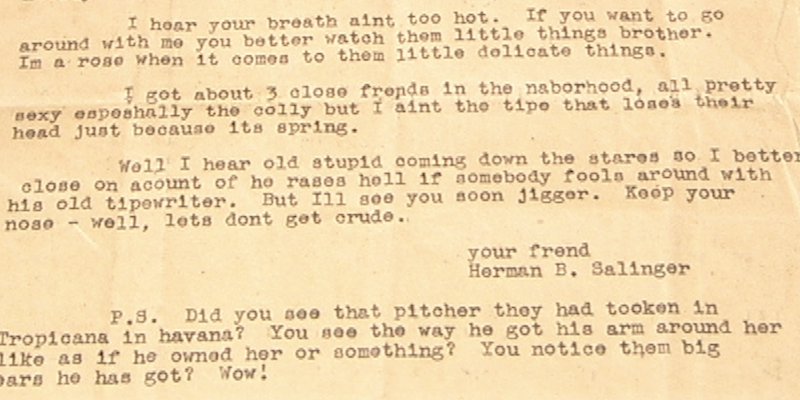 Who's this dog's best friend? Read the whole slobbering letter from Salinger's pet "Herman" to "Jigger," the new love of his life.

In April 2018 a ROADSHOW guest named Erika brought a love letter, of sorts, to the taping event at Ca' d'Zan in Sarasota, Florida. Erika explained that J.D. Salinger, the famously eccentric novelist, had met her great-aunt on a cruise to Cuba in the late 1940s and that they had fallen in love. The letter she brought is indeed a lusty missive — but in the strange guise of one written by Salinger's dog "Herman" to his opposite number, "Jigger," the canine companion of J.D.'s new girlfriend.

"... he jerks my leesh all the time and in general acts like a big jerk."

We learn in the letter that Herman has hurriedly typed up the note while his unwitting master, J.D. — whom Herman derisively calls "big shot" — is upstairs "shaving his ridikilous face."

Books & Manuscripts expert Ian Ehling explained that since Salinger was such a private man, there are very few of his letters that come to auction (and ones by Herman are presumably rarer still). He estimated the current value of the letter at $600-$800.

How are you feeling I am feeling fine. Wile big shot is upstairs shaving his ridikilous face I am going to write you a letter jigger. He don’t even know I can tipe, I can tipe better then he can and could write better storys if I felt like it, the trouble is I aint got the time.

I seen your mother when she was up to my house. Pretty tall and skiny but not too bad if you like that tipe. Old big shot hasnt been the same since he met her and she left on that plane, he jerks my leesh all the time and in general acts like a big jerk.

I hope I see you soon jigger because I heard you was very attractive. I heard you wasnt no female but I was never one for splitting hairs on a little detail like that, besides my eyes aint too hot.

I spent my extreme youth in Germany. In Germany I was a big shot with a swell job waiting for me at the police station, but I had to open my big mouth when j.d.s. was around and spirl the whole thing.

I imagine you would be crazy about me jigger old shrimp, as I am very tall, dark and hairy, and when I walk on the street I have to beat off all the other dogs with a club. Also I am very modest and hardly ever talk about myself unless an oportunity comes up.

Is it very hot down there, Im not too crazy about the heat on account of I like cold wether better. The trouble is nobody ever asks me.

I hear your breath aint too hot. If you want to go around with me you better watch them little things brother. Im a rose when it comes to them little delicate things.

I got about 3 close frends in the naborhood, all pretty sexy espeshally the colly but I aint the tipe that loses their head just because its spring.

Well I hear old stupid coming down the stares so I better close on account of he rases hell if somebody fools around with his old tipewriter. But Ill see you soon jigger. Keep your nose – well, lets dont get crude.

your frend
Herman B. Salinger

P.S. Did you see that pitcher they had tooken in Tropicana in havana? You see the way he got his arm around her like as if he owned her or something? You notice them big ears he has got? Wow! 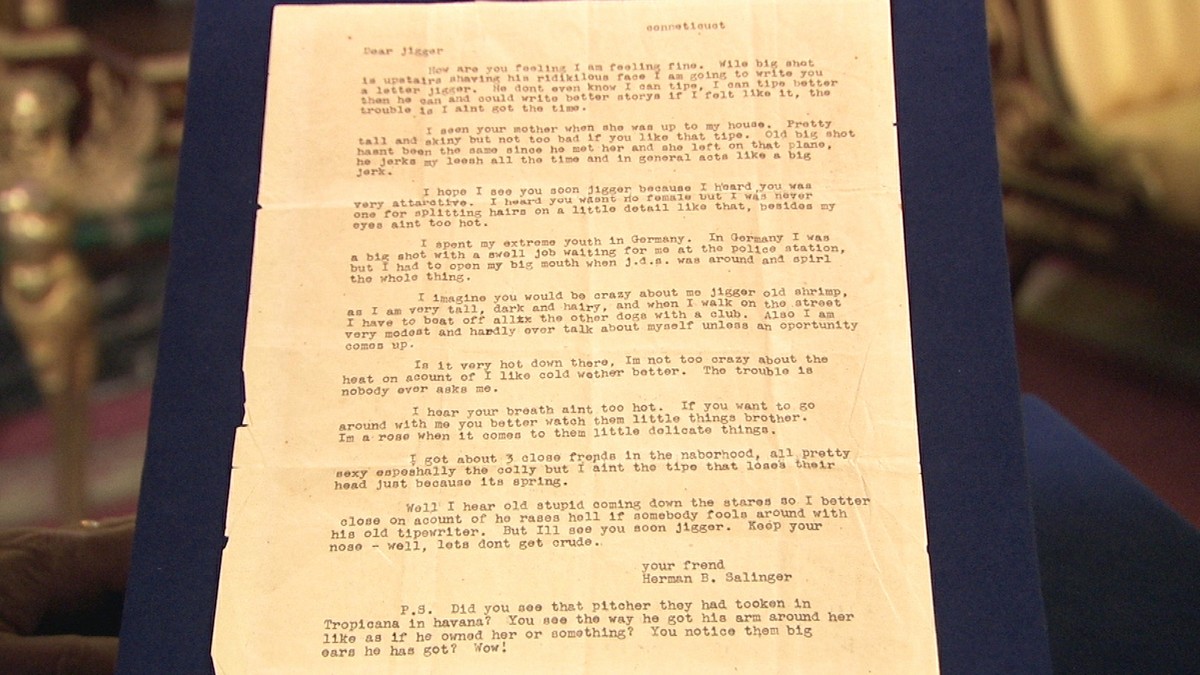