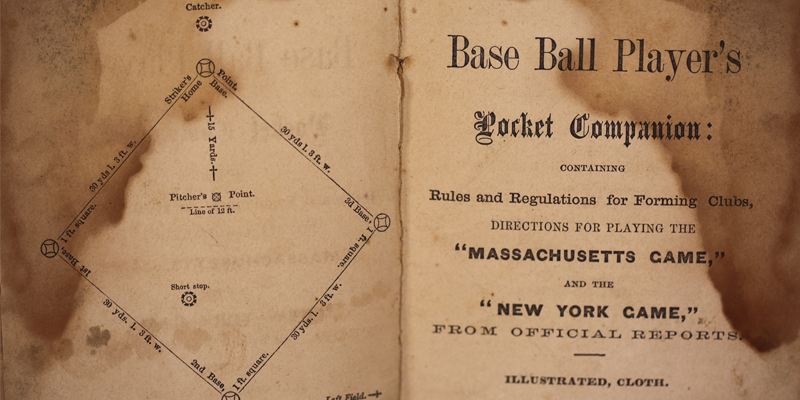 At the May 2018 ANTIQUES ROADSHOW event at the Hotel del Coronado in San Diego, California, a guest named Jill shared an original 1859 edition of the Base Ball Player's Pocket Companion with Sports Memorabilia appraiser Leila Dunbar.

Jill came into possession of the book after her husband, an avid baseball card collector, found it among the contents of a storage locker that he purchased 20 years ago. Unfortunately a leak in the storage locker had led to the book's becoming partially water damaged sometime in the past, but it was still a valuable find: according to Dunbar, the Pocket Companion is widely considered by historians and collectors to be the most important early baseball book, and there are fewer than 10 known to exist today.

The need for such a rulebook can be traced back to the regional differences in baseball rules and regulations that existed during the early history of the game. Originating in Massachusetts, the game became popular in the Northeast during the 19th century. At the time, Dunbar explained, there were two major variations: the "Massachusetts Game" and the "New York Game."

The Massachusetts variation of the game was distinguished by its use of a square field (instead of a diamond), stakes (instead of bases), and smaller overall scale (60 feet between the bases instead of 90).

The New York game described in the Pocket Companion is much more similar to the baseball's modern incarnation. Already more popular than the Massachusetts variation at the time, it was cemented as the standard style of play throughout the majority of the United States after being played on army bases around the country during the Civil War.

As Dunbar explains, rulebooks such as the Pocket Companion quickly became obsolete after the New York style of play became commonplace. Today, they are valuable collector's items — she estimated the current auction value of Jill's book in the range of $4,000-$6,000. If not for the copy's considerable water damage, it would be worth somewhere in the range of $8,000 - $10,000!

Click through to see select pages from the Base Ball Player's Pocket Companion!

About the Author Josh Artman
Josh Artman is an ANTIQUES ROADSHOW digital intern.
More from PBS