Read a Letter from Anaïs Nin to Her Childhood Friend 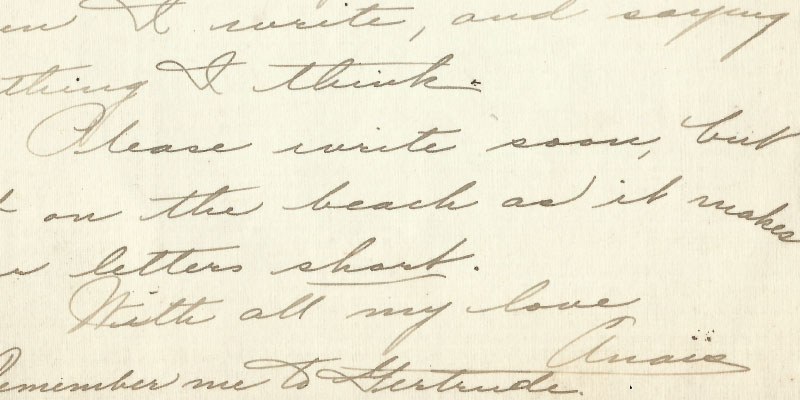 The budding author corresponded with her close friend Eleanor during summer vacations away from their homes on Long Island.

At the April 2018 ANTIQUES ROADSHOW event at Ca’ d’Zan in Sarasota, Florida, a guest named Pamela brought in a collection of letters written by the now-famous author Anaïs Nin to Pamela's grandmother Eleanor — who was a childhood friend of Anaïs during their childhood on Long Island.

The series of correspondence — carried out while the friends were apart over summer family vacations — offer "a wonderful insight into the teenaged minds of [her] grandmother and the not-yet-famous Anaïs Nin," said expert Ken Sanders.

The following letter from 1920 is a charming example of Anaïs Nin's developing style — poetic, keenly sensitive to the rhythms of nature, and remarkably circumspect for such a young writer.

Sanders estimated the current retail value of Pamela's letters at between $4,000 to $5,000.

Read the full letter below!

Letter from Anaïs Nin to her friend Eleanor, 1920

Are you really really fifteen now? When you told me this, I could hardly realize it, and I had to tell myself again and again that I am seventeen (even looking towards eighteen already), and that I couldn’t grow up alone! Oh! Eleanor, how quickly the years pass. I have been thinking of our school-days, having seen Pauline Ryan the other day. Do you remember her? At that time when we quarrelled [sic] (and I can’t remember why) I thought I could never love a friend again, or have any faith in friendship! Then I met you, that was years and years ago — but all the years do not matter one bit if they don’t change us — even tho’ we don’t see each other as often. Yet wait until September and then we are going to be together as often as possible!

Your letter seemed a picture. I could see you walking along the “nice, long, dusty road” which you describe so well, and I wished I had been walking with you; if this had been true, I am sure I would have told you then of my second tiny success, because I can scarcely think of anything else. When you read the September Delineator you will find 2 poems instead of one, and the last one accepted as an adult contribution. And Eleanor, it was Mother who inspired this one. I think that is the greatest cause of my happiness!

These days linger in my memory, because of the walks I take. I am glad you enjoy the same things — the smell of the fields — and Eleanor, in the evening here the trees of the woods loom in the complete darkness — all is filled with myriads of mysterious sounds — the grasshopper, the little insects which illumine their way with the light of their own body.

Often I go to New York, but not willingly. I saw a play called “Seeing Things” dealing with spritism which made us laugh continually. One of the characters says, referring to the hundreds of times people regret Adam’s weakness: “Adam did eat Eve’s apple, but he left posterity to digest it.”

What you tell me of Scott’s “Pirate” makes me wish to read it, only I am deeply interested in Plato’s works and want to finish one of his books first, since I find that I don’t know how to reason, in fact, I am afraid Logic is a closed book for me which I want to open. Plato makes you think, think think — until sometimes I think I hate to think. But you see, if I am to take philosophy in Columbia I want to be prepared — and each day I find out how little I know! I hope you won’t have to read Plato for a long time, because it makes you look for the “reason why,” the conclusions, arguments — of everything and anything. And then sometimes you wish to forget such thing as logic and live by Just feeling and wondering only a little bit, without finding out anything.

I am afraid I am boring you, Eleanor, but I always believe I am Just speaking to you when I write, and saying anything I think.

Please write soon, but not on the beach as it makes you letters short.

With all my love

P.S. Remember me to Gertrude.