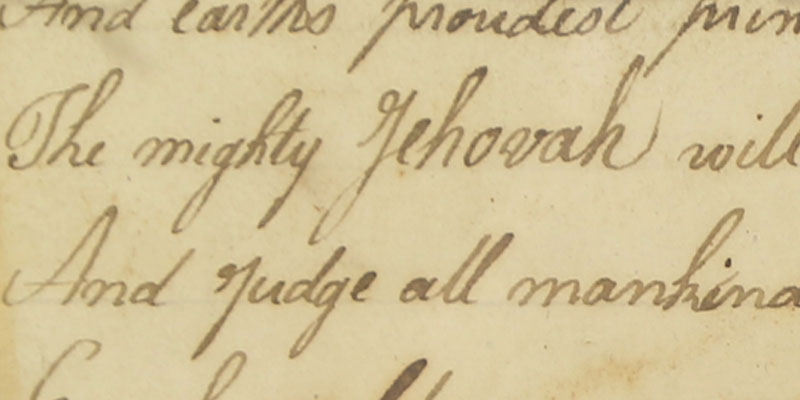 While at Churchill Downs, ROADSHOW was presented with a painting and poem that illustrated religion and Greek mythology, created by a schoolgirl from the East Coast.

During ANTIQUES ROADSHOW’s April 2018 visit to the Churchill Downs Racetrack in Louisville, Kentucky, a guest named Barry brought in a watercolor painting that had caught his eye at a local charity sale.

The painting depicts seven women, six of whom wear crowns made of flowers, all with solemn expressions. The painting is framed, with a glass panel on the back, revealing a fabric-like piece of paper containing a religious poem. Appraiser Karen Keane noted that the watercolor was most likely painted by a school-aged girl in the early 19th century, due to the subject of the painting and the theme of the poem.

*…As a young woman, you were schooled in all the arts. And you got a background in religious education then also in Greek mythology. ..."

Keane said her educated guess is that the young women in the picture most likely represent the Seven Sisters, as known as the “Pleiades" — a well-known cluster of seven stars visible in the night sky near the constellation Orion.

According to Greek mythology, the Seven Sisters were the daughters of the titan Atlas and the sea-nymph Pleione. As the story goes, the hunter Orion saw the seven sisters and fell in love with them, pursuing them ceaselessly for seven years. Finally, Zeus saved them from Orion's attention by turning them into doves and setting them in the sky. When Orion eventually died, he was placed in the sky next to them.

The religious fervor of this unknown young girl is evident in the lines of the poem she composed and inscribed on the reverse of the painting. Her verses evoke the ideas of redemption through Jesus, emphasizing the belief that even the most beautiful among the living will perish without being saved by Him.

Keane surmises the allegorical connection between the poem and the painting saying that in Greek mythology the Pleiades constellation is visible during the spring before disappearing in the fall, echoing the poem's themes about death and rebirth. The poem also contains a line about how “beauty tho’ blooming must wither away / And the gold that’s kep’t safety will take wings and fly,” which can be a reference to Zeus casting the objects of Orion’s attention away from him by turning them into doves.

Read the full poem below!

The flowers must all fade and the fruits must decay
And beauty tho’ blooming must wither away
And the gold that’s kep’t safely will take wings and fly
And earths proudest princes must sicken and die
The mighty Jehovah will blow out the sun
And judge all mankind for the deeds they have done
Crush worlds in a moment bid nature expire
Set rocks hills and mountains and oceans on fire
But the soul that has chosen the only good way
Will shine forth immortal in mansions of day
And when thoughtles sinners must sink down to hell
Will rise up triumphant with Jesus to dwell
Come O then ye thoughtless no longer delay
O trifle no longer the moments away
The savior of sinners is now passing by
Come O then ye thoughtless and on him rely
O hasten unto him while yet, tis today
O haste to seek mercy and grace while you may
O hasten unto him while yet there is room
O hasten while Jesus invites you to come