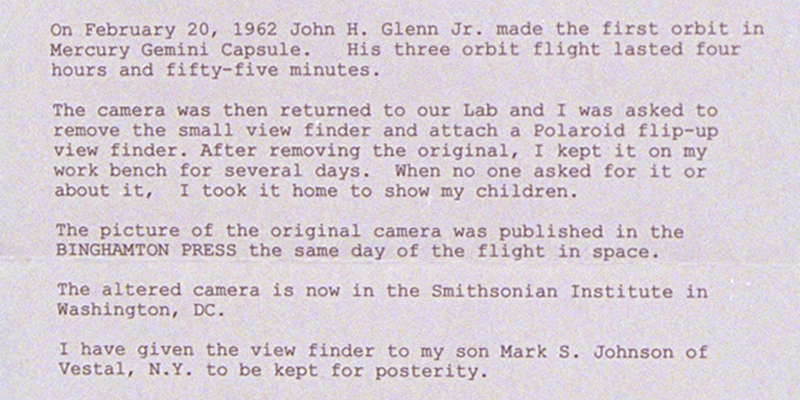 Read the full letter from physicist Frederick M. Johnson, which chronicles how he came into the possession of a viewfinder that orbited the earth in 1962.

At the 2002 ANTIQUES ROADSHOW event in Charlotte, North Carolina, a guest named Marta brought in a camera viewfinder that had been used by John H. Glenn Jr. when he became the first American to orbit the earth on February 20, 1962. Accompanying the viewfinder was a letter from Frederick, Marta's father.

Now a prominent physicist and a Fellow of the American Physical Society, in the early 1960s Frederick was an employee in the Ansco Development Lab. In his letter, he explains that in early 1962, he was given a camera and tasked with attaching a custom viewfinder so that it could be used by Glenn in his upcoming Project Mercury flight.

"After John Glenn's mission...they sent the camera back and asked him to replace the viewfinder with a Polaroid flip-type viewfinder that was a little easier to use. And I guess they used the camera again in another space mission. But he kept the piece in his toolbox, and no one ever came back for it," Marta said to Collectibles appraiser Tim Luke.

While the camera itself resides in the Smithsonian, Luke suggested that Marta get her father's letter notarized and placed the viewfinder at a retail value of $1,000 to $2,000.

Read the full letter below!

My name is Frederick M. Johnson. From 1960 to 1965 I was employed by the Development Lab of Ansco in Johnson City, New York. Ansco was a subsidiary of General Analine & Film Corp., a German firm that was taken over by the U.S. Government during World War II.

In early 1962, I was given a camera and asked to add a view finder that I was to make from scratch. It was to be attached to the bottom of the camera. My co-worker attached a handle on the top of the camera so it could be held with the left hand, and a lever to advance the film. We were told it was to be used for the first flight to orbit the earth.

The camera was then returned to our Lab and I was asked to remove the small view finder and attached a Polaroid flip-up view finder. After removing the original, I kept it on my work bench for several days. When no one asked for it or about it, I took it home to show my children.

The picture of the original camera was published in the Binghamton Press the same day of the flight in space.

The altered camera is now in the Smithsonian Institute in Washington, DC.

I have given the view finder to my son Mark S. Johnson of Vestal, N.Y. to be kept for posterity. 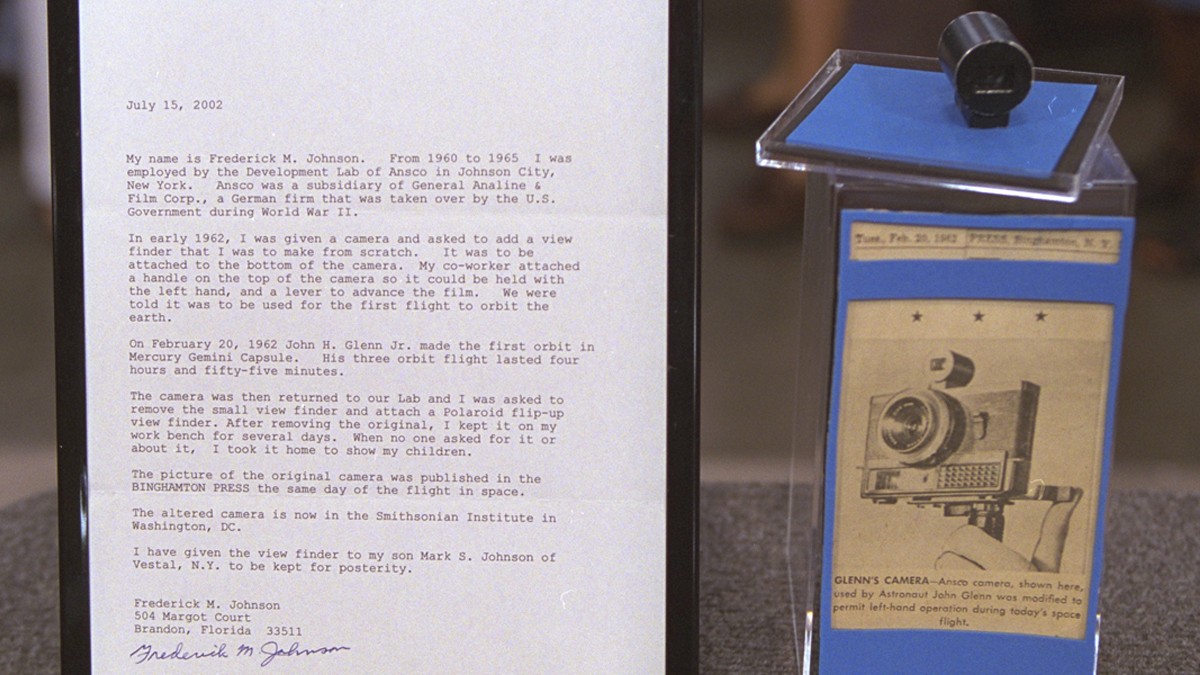 About the Author Josh Artman
Josh Artman is an ANTIQUES ROADSHOW digital intern.
More from PBS