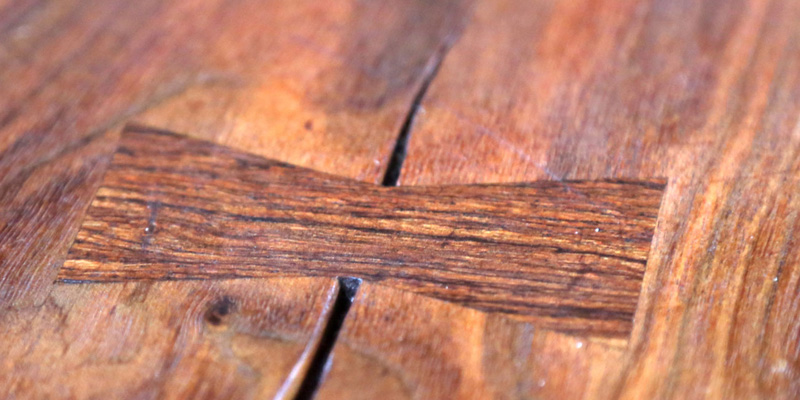 See an example of a real George Nakashima butterfly joint.

During ANTIQUES ROADSHOW’s 2004 event in Memphis, Tennessee, a guest named Cindy brought in what she believed could be a George Nakashima table. Although the table’s irregular shape and cypress material alluded to the maker being Nakashima himself, upon closer look, Decorative Arts & Furniture appraiser Karen Keane noted one big giveaway that the table was not designed by the Japanese craftsman.

Keane pointed out that two pieces of metal were holding a natural piece of wood together – an element that was not a part of Nakashima’s style. Keane explained:

“Now, it is not the kind of construction that we would see Nakashima making. We would have expected him to make a beautiful…what’s called “Dutchman” in cabinetry, and it would be a butterfly hinge – it would look like an hourglass or butterfly wings. And he would have held the two pieces of wood breaking apart together with that.”

But what exactly does a “butterfly hinge” or "joint" look like? ROADSHOW found an example on a 1988 George Nakashima Canoid Bench in Green Bay back in 2017.

See the butterfly joint below!