See the "Pearly Kings and Queens" 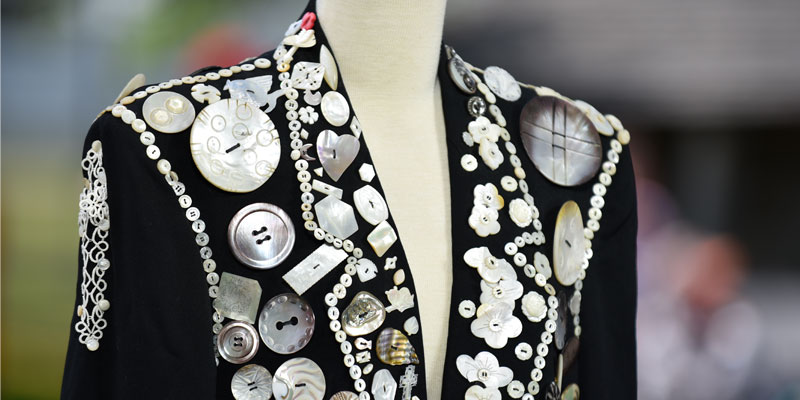 Check out the modern-day Pearly Kings and Queens and get a close-up look at “Pearly Pat” in her finery!

During the 2019 ANTIQUES ROADSHOW event at Bonanzaville in Fargo, North Dakota, a young guest named John brought in a handmade mother-of-pearl suit that had belonged to his grandmother. John told Rugs & Textiles appraiser Katy Kane how the suit was styled in the fashion of a piece worn by the so-called "Pearly Kings and Qiueens," a charitable organization started in mid-19th-century London by a young orphan named Henry Croft, who wanted to raise money for the poor. Croft's cause soon came to be championed by London's street vendors, called "costermongers," who were known for wearing flashy, attention-grabbing adornments, and for often having colorful and outsize personalities to match.

Back in Bonanzaville, John told Kane that his grandmother, who called herself "Pearly Pat," sewed every single button on the suit, and that she would wear it outside for hours, walking around to help raise money for hospitals and churches. Kane noted the intricacies of Pat's button collection and design:

"She was not only a very talented seamstress, with all this button work and making the designs — she's got a fish and butterflies — she was also a very generous woman. There's probably a thousand buttons on this suit. It's a real showstopper."

Kane told John that his grandmother's jacket and floor-length skirt were probably completed in the 1970s, giving it an insurance value of $2,000.

See the "Pearly Kings and Queens" below!

"Pearly Pat" in her exquisite mother-of-pearl suit.
About the Author Oliver Long
Oliver Long is an intern for ANTIQUES ROADSHOW.
More from PBS