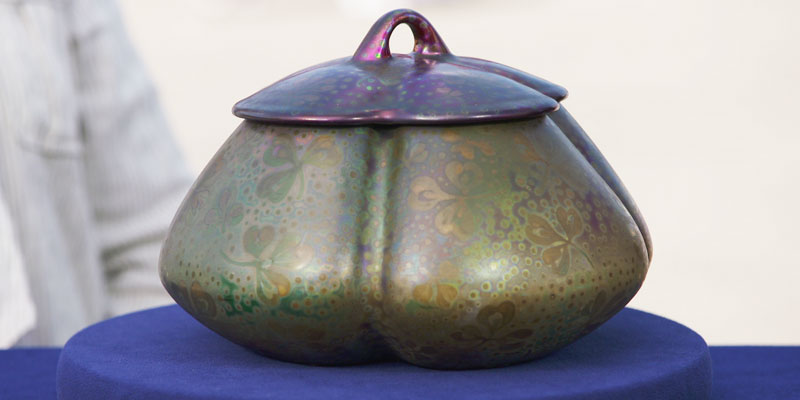 Heeding the advice of a ROADSHOW appraiser, a guest cleaned her Weller-Sicard jar, and sent ROADSHOW photographs of the results!

At ANTIQUES ROADSHOW’s 2019 event at Bonanzaville in Fargo, North Dakota, a guest named Doris brought in a piece of Weller-Sicard pottery dating back to 1905. Doris explained to Pottery & Porcelain expert David Rago, that she purchased the jar for her husband as a Christmas gift about twenty years prior. Although the piece was unique, Rago note that it’s aesthetic appeal, and value, could be improved with a little polishing.

According to Rago, in 1903, Samuel Weller hired Jaques Sicard, who was known for his unique iridescent glazes, to move to Zanesville, Ohio, to pursue his craft. Because Weller was infamous for learning the secrets of his staff and then firing them, Sicard kept his process a secret – which was supposedly firing a piece seven times in order to get an iridescent glaze.

Rago examined the condition of the jar and confirmed its authenticity by pinpointing the signatures of the artist’s names. Although its condition was flawless, Rago noted how the use of silver polishing mitts would increase the overall quality of the hand-painted jar, as its color had dulled over time due to oxidation:

“(…) There is so much color on the top of this piece,” Rago said, “especially in this part of the lid right here, the shimmering scarlet and midnight blue and effervescent, emerald greens — this thing would really glow with some silver polish, cleaning it off.”

If the jar were cleaned properly, Rago estimated that its auction price would be between $1,000 and $1,500 dollars.

Later that summer ANTIQUES ROADSHOW got a pleasant surprise in the mail when Doris sent us these photographs of her precious jar, freshly cleaned and polished!