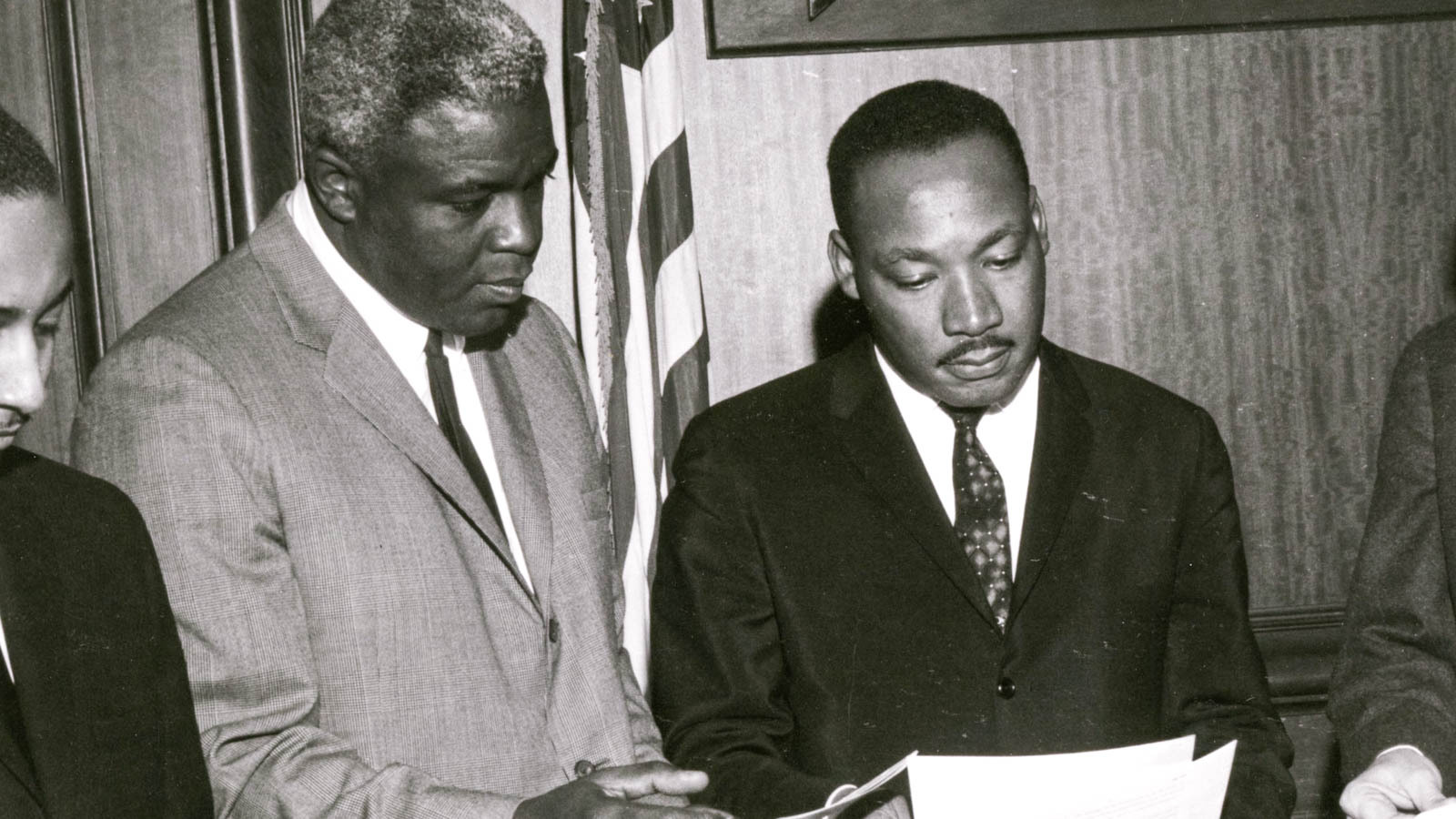 In August 1962, Martin Luther King Jr. wrote a public letter congratulating Jackie Robinson on his recent induction into the Baseball Hall of Fame. More than just a celebration of Robinson’s career, King’s letter lauded the star athlete for his contributions and ongoing activism in the Civil Rights movement. Noting that Robinson “has stood as a stalwart against segregation and discrimination North and South,” the Civil Rights leader championed Robinson for fighting for integrated education, housing justice, and voting rights. “Jackie Robinson,” King wrote, “incessantly raises questions to sear America’s conscience.” Indeed, Robinson had just as much impact in the Civil Rights movement as he did in sports. 1

For those who followed Robinson’s career before he became a Brooklyn Dodger, they would not be shocked that the star athlete became an activist. In short, Robinson had a strong sense of justice and would not budge if he felt wronged. In 1944, for example, while serving in the military, Robinson was court-martialed for getting into a verbal confrontation with a white officer, which sparked when Robinson refused to heed a bus driver’s segregationist order that he move to the back of the bus. Fortunately, Robinson beat that case. But when Branch Rickey signed Robinson to the Dodgers a year later — he signed in 1945 but debuted in 1947 — Rickey asked Robinson to bottle up that passion and turn the other cheek when faced with injustice. Rickey worried that if Robinson always fought back, the “great experiment” of integration would be ruined. Internally, Robinson burned with anger at the injustice he saw all around him but waited patiently for the day he could speak up.

Robinson took his first public stand for justice in 1949. That summer, the House Un-American Activities Committee (HUAC) — a congressional committee created in 1938 to stamp put disloyalty in America, especially among suspected communists after World War II — asked Robinson to come to their committee and publicly denounce actor/activist Paul Robeson for his recent statement that Black Americans would refuse to fight for America in what many believed was an impending World War III.

In the hearing, Robinson did what was asked of him and denounced Robeson as an out-of-touch communist who didn’t have his finger on the pulse of Black America. But he also threw the committee a curve ball. He let them know that just because a communist criticized America, “injustice in the courts, police brutality and lynching, when it happens, doesn’t change the truth of his charges.” 2 Robinson insisted that Black Americans would not follow Robeson; however, they would continue to fight until they beat Jim Crow. From that moment on, Jackie Robinson, the baseball barrier-breaker, was relentless in his attack on American injustice.

Robinson used his powerful platform to fight for civil rights in a myriad of ways. He had political friends in high places, including at the White House, and often wrote men like President Dwight Eisenhower, and especially Vice President Richard Nixon, imploring them to fight against lynching or to pass civil rights legislation. Moreover, after his retirement from baseball Robinson began to write a syndicated column — titled “Jackie Robinson Says” — in which he spent a considerable amount of time discussing social justice issues like police brutality.

He also used his star power to participate in marches, as he did in 1958 when he was front and center for the “Youth March for Integrated Schools” in the nation’s capital. The following year he made headlines in Greenville, South Carolina, when he refused to move to a “colored only” section of their airport, and instead took a sip of water from a “white’s only” fountain in radical defiance.

As a Black athlete, he believed that it was imperative that he and his fellow Black athletes join the movement. He not only led, but he made sure others followed. In 1962, for example, he brought baseball star Curt Flood and boxers Archie Moore and Floyd Patterson with him to Jackson, Mississippi, to give support to those risking their lives in the Deep South. The following year, he encouraged every Black baseball player to join him in a “Freedom Day Demonstration” to protest for civil rights. After hearing Robinson’s plans, one sportswriter, Charles J. Livingston remarked, “If the current colored major league players fail Robinson, they’ll also be failing their race as well.” 3 Livingston, like Robinson, strongly believed that Black athletes had a necessary role to play in the Civil Rights movement. For Robinson, this often meant using his notoriety to get involved in politics.

While he often identified with Republicans politically, Jackie Robinson remained neutral and reserved his right to attack both parties, claiming “I do not vote for a party but for men who, to me, exemplify high principle.” 4 More than often, “high principle” meant civil rights. In 1960, Robinson campaigned for Nixon’s presidential bid because he believed the vice president would be a better advocate of civil rights than Democrat John F. Kennedy. Four years later, however, he would disavow Sen. Barry Goldwater and the entire GOP because of their lack of support for the Civil Rights Act.

In the meantime, while Kennedy was president, Robinson called him out for his lack of legislation protecting civil rights. In a 1962 article called “Mr. Kennedy Is Doing Nothing for Civil Rights,” Robinson wrote, “He has achieved nothing — and has fought for nothing — in the area of civil rights legislation.” 5

Robinson argued that Black people “should do everything short of violence to achieve what is rightfully ours under the Constitution,” and believed that the vote was the strongest weapon Black Americans could use to fight injustice. Just as he blazed the baseball paths during his playing career, as a citizen he fearlessly bound from city to city giving speeches and imploring Black Americans to vote. With strength in numbers, he urged, Black voters could shift the winds of justice in their favor.

A Shifting View of America

However, by the end of the 1960s, Robinson became disillusioned and disappointed with American democracy. Even after significant Civil Rights legislation had passed, he felt that America’s racism still smothered the dream of equality. The long hot summers of racial unrest, the increasing sense that the GOP had abandoned Black Americans, and the assassinations of Robert Kennedy and Martin Luther King Jr., had left him disillusioned. For him, the symbol of that disconnect was represented in displays of patriotism that he believed masked prejudice. As he told one reporter, “When I see a car with a flag pasted on it, I figure the guy behind the wheel isn’t my friend.” Robinson, in fact, stopped standing for the National Anthem during sporting events, stating, “I cannot salute the flag; I know that I am a black man in a white world. In 1972, in 1947, at my birth in 1919, I know that I never had it made.” 6

While Jackie Robinson was undoubtedly a controversial figure for his stance on civil rights, through it all, he also served as an example for others to follow. The baseball legend understood that his celebrity gave him special status, but that he could never be truly free until all Black people shared the privileges he had. As he often said, “No Negro has it made, regardless of his fame, position or money — until the most underprivileged Negro enjoys his rights as a free man.” 7 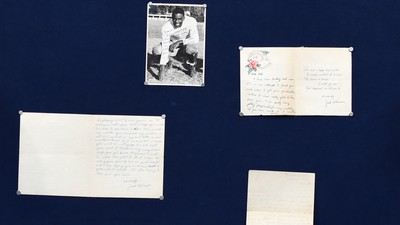 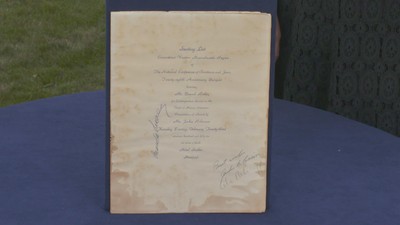 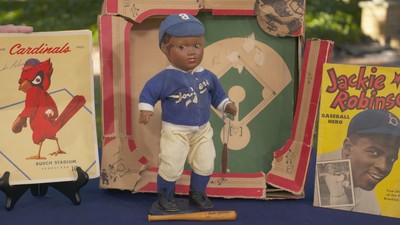 About the Author Louis Moore
Louis Moore is a professor of history at Grand Valley State University, where he specializes in African American history. He is the author of the 2017 book "I Fight for a Living: Boxing and the Battle for Black Manhood, 1880-1915."
More from PBS