Is America Still the Leader of the Free World?

Many Americans think the United States is still the leader of the free world, but most do not perceive the global prominence of the United States to be growing, according to an exclusive Third Rail with OZY/Marist poll. Americans also exhibit lackluster confidence in the United States’ ability to continue to be a leader in world affairs, marking a notable shift in public opinion over the last four decades. 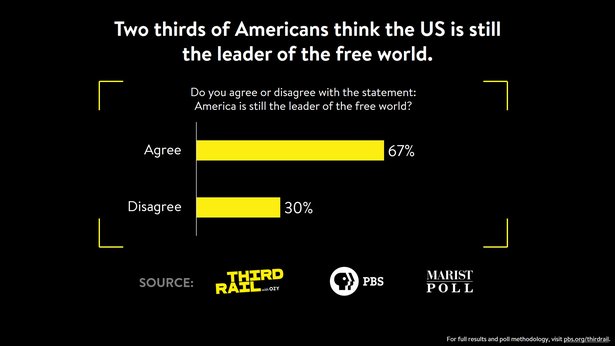 Although more than two-thirds of Americans (67%) consider the United States to still be the leader of the free world, only 20% of residents nationally—down from 31% in a 1978 ABC News/Harris Survey—think the United States plays a more important role as a world leader.  Nearly four in 10 adults (37%) believe the United States’ role on the world stage is less important than it was a decade ago; 39% assert the nation functions in just as important a role as it has.

Partisan differences are present in both findings. While 86% of Republicans and 72% of independents say the United States remains the leader of the free world, only half of Democrats (50%) agree. Forty-four percent of Democrats think the United States has lost its leadership position on the world stage and 6% are unsure. 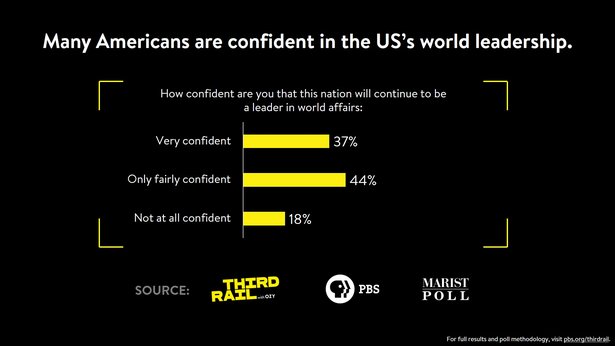 Americans’ confidence in the United States’ ability to continue to be a leader in world affairs is waning. Thirty-seven percent of U.S. adults, down from 49% in a 1983 Roper Report, are very confident that the nation will remain in the fore of international leadership.  Forty-four percent are only fairly confident that the United States will retain its leadership status, and 18% are not at all confident.  Again, opinion splinters along party lines.  Sixty-two percent of Republicans report they are very confident in the United States to be a global leader while pluralities of Democrats (49%) and Independents (47%) say they are only fairly confident in America’s ability to do so.

Americans’ support for the United Nations is nearly as strong as it was fifty years ago.  Seventy-five percent of residents nationally, compared with 81% in a 1967 Harris Survey, believe the U.N. is worthwhile while 18% do not. Seven percent are unsure. Most Democrats (88%) and Independents (82%) value the U.N.  Fewer Republicans (59%) agree.  Americans under 45 years of age (83%) are more likely than older residents (69%) to think the United Nations is a worthwhile organization. 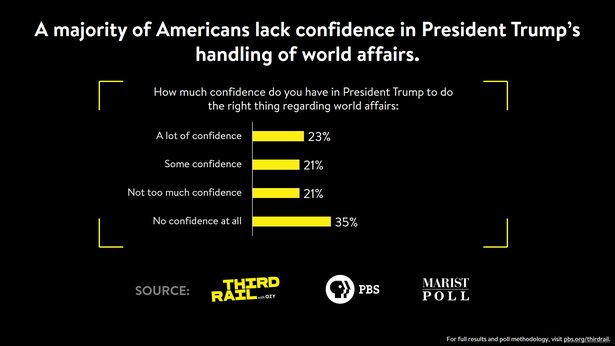 This survey of 508 adults was conducted September 19th and September 20th, 2017 by The Marist Poll sponsored and funded in partnership with WGBH Boston and OZY Media for the new PBS prime-time, cross-platform debate program Third Rail with OZY. Adults 18 years of age and older residing in the contiguous United States were contacted on landline or mobile numbers and interviewed in English by telephone using live interviewers. Mobile telephone numbers were randomly selected based upon a list of telephone exchanges from throughout the nation from Survey Sampling International. The exchanges were selected to ensure that each region was represented in proportion to its population. Mobile phones are treated as individual devices. After validation of age, personal ownership, and non-business- use of the mobile phone, interviews are typically conducted with the person answering the phone. To increase coverage, this mobile sample was supplemented by respondents reached through random dialing of landline phone numbers from ASDE Survey Sampler, Inc. Within each landline household, a single respondent is selected through a random selection process to increase the representativeness of traditionally under-covered survey populations. Assistance was provided by Luce Research for data collection. The samples were then combined and balanced to reflect the 2013 American Community Survey 1-year estimates for age, gender, income, race, and region. Results are statistically significant within ±4.3 percentage points. There are 429 registered voters. The results for this subset are statistically significant within ±4.7 percentage points. The error margin was not adjusted for sample weights and increases for cross-tabulations.. See full poll results »