Naval Battleships in the War of 1812

When the United States declared war on Great Britain in June 1812, the U.S. Navy was an eighteen-year-old institution with barely a dozen ships to its name. The British Royal Navy, by contrast, had been operating for centuries, and could boast over five hundred active warships.  Eighty-five of these ships were sailing American waters at the time war broke out.

British and American Manpower at Sea

In manpower, too, the British far outstripped the Americans.  The Royal Navy was paying around 140,000 seamen, 31,000 of whom were well-trained marines. The fledging U.S. Navy had about 5000 seamen and 1000 marines.

But war at sea in 1812 would not be a simple numbers game.  Britain’s huge fleet required far more men than were available at any given time, and even with impressment – the practice of forcing men into naval service – Royal Navy ships were undermanned.  Conditions of service were difficult: a monotonous diet, harsh punishments and rough company.  An average British crew might include criminals, as well as foreign sailors who felt very little loyalty to the Crown.

The typical U.S. crew might face some of the same conditions, but the young Navy was commanded by a corps of surprisingly well-trained and experienced officers.  Many had seen action in the “Quasi-War” with France and against Tripoli.  And while the official Navy might be young, the American maritime tradition was not.  Most of America’s seven million people lived in coastal states, and for more than a century, seafaring had been both livelihood and lifeline in North America. This way of life was threatened when the British, exercising their advantage, established a blockade along the eastern seaboard, strangling American shipping and commerce.

The USS Constitution in the War of 1812

Isaac Hull of Connecticut could claim something of a military heritage – both his father and uncle fought in the American Revolution. While his uncle William distinguished himself in the militia, his father Joseph commanded a flotilla of whaleboats on Long Island Sound, harassing the British whenever possible.  Isaac followed his father’s lead, and began a sailing career at 14, first serving as a cabin boy on a merchant ship, then progressing rapidly through the ranks.

At 20, Hull received his first merchant commission; two years later, in 1793, he was commissioned fourth lieutenant in the U.S. Navy and assigned to the USS Constitution.  He saw action in the Caribbean and the Mediterranean, and sparred with the French navy and Barbary pirates. On June 17, 1810, at age 33, he was given official command of the USS Constitution.

The Constitution was one of America’s splendidly constructed frigates, with a forty-four gun capacity and thick hulls of dense live oak.  Not satisfied with forty-four, Hull crammed at least fifty guns on board in 1812.

The ship first gained fame when, under Hull’s command, she outran a British squadron in a dramatic sea chase that lasted fifty-seven hours.  One month later, in August, 1812, the Constitution encountered the British Guerriere in the Atlantic.  The broadside weight of this heavy frigate gave the Constitution an advantage over her British counterpart, easily withstanding the British attack and answering with round after round of punishing cannon fire. When the Constitution’s boarding officer arrived on the Guerriere’s deck to enquire whether she had indeed struck her colors, Captain Dacres of the Guerriere replied, “Well, I don’t know; our mizzen mast is gone, our main mast is gone, and, upon the whole, you may say we have struck our flag.”

Two more U.S. frigate victories followed that same year. The U.S. Navy could not break the blockade, but early in the war, these sea battles showed the world that Americans knew how to build ships, and how to sail them.

Shipbuilding on the Frontier

In December, 1812 Congress voted to fund another ten of these heavy ocean-worthy frigates but none would be ready to fight for years. In a way, this did not matter. Both sides knew early on that naval dominance of the Great Lakes was the key to victory, since these inland waterways were crucial for supplying any army.  A race was on to build lightweight warships for the lakes as quickly as possible.  This is where the decisive naval battles would take place.

The U.S. Navy started building a squadron of gunboats and two frigates in the remote town of Erie, on the shores of Lake Erie.  It was an odd choice, given that there were no access roads, no foundries, rope factories or shipwrights nearby.  But the area’s dense forests provided the critical resource – tall straight timbers for planking and masts. In fact, the timber resources in North America were one of the several reasons that Britain wished to hold on to the Canadian provinces. Timber on the British Isles was all but gone – any new ships for the Royal Navy would be fashioned out of New World wood.  Not surprisingly, British shipwrights were also busy building ships on the Great Lakes, in Amherstburg and Kingston, Ontario.

The Battle of Lake Erie

The British captain charged with control of Lake Erie was Commander Robert Heriot Barclay, an experienced naval officer frustrated by the difficulties of maintaining an inland fleet.  Supplies and reinforcements came only intermittently, and by 1813 his squadron was smaller in both number and size than the American squadron in Erie.  But Barclay was in possession of thirty-five long guns, powerful cannon that could throw up to forty-two pound shot over distance.

Barclay’s opposite number, Master Commander Oliver Hazzard Perry, had only twenty carronade, a short stocky cannon with a limited range.   Perry had more ships, but they were lightly built, with two-inch hulls that could never withstand a hit from Barclay’s long guns. In theory, even musket shot could penetrate the thin hulls of Perry’s ships.

On September 10, 1813 when Perry and Barclay faced off, all the elements of battleship construction came into play: maneuverability, hull strength, broadside weight.  Perry had nine vessels in total, but his second-in-command, Jesse Elliot, inexplicably held his ship, the Niagara, and four smaller ships out of the battle.  As Elliot’s ships hung back, Commander Barclay, at a mile’s distance, concentrated his long guns on Perry and his flagship Lawrence.  The result was a bloody massacre.  With each hit, the hull shattered into dozens of deadly splinters that were propelled across the deck. Sixty percent of the Perry’s crew on the Lawrence were killed.

In what has become a celebrated episode of U.S. naval history, Perry vacated the Lawrence and headed for the Niagara in a rowboat, carrying with him a banner that read “Don’t Give up the Ship.”  Once on board the Niagara he had the carronades double-loaded, and continued to trade broadsides with the British.  Taking advantage of a wind change, he sailed the ship directly into the British line, then let loose with broadsides from both port and starboard, raking four ships at once.  The double-loaded carronades were effective, not only in shattering hulls, but in causing such confusion that two British ships, the Queen Charlotte and the Detroit, collided and become inextricably locked together.  Barclay struck his colors and Perry penned his famous note: “We have met the enemy and they are ours.  Two ships, two brigs, one schooner and a sloop.” 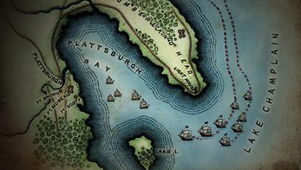 The British enter Plattsbugh Bay to face the small squadron of U.S. ships The Brig Niagara at sail on Lake Erie, 2009. 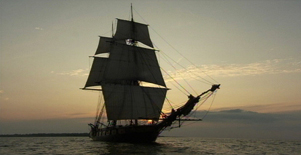 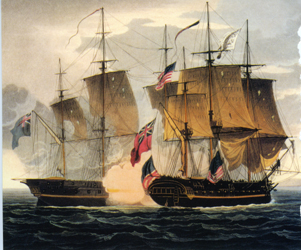