Why did I decide to tell the story of this war with so many re-enactments? I’ve used this technique in the past, but sparingly, and think that it has some serious drawbacks. However, with The War of 1812, there was really nothing else to show.  Photographs and archival movies are the bread-and-butter of historical documentary, but President Madison declared this war twenty-eight years before the first photograph would be made in America.  Motion pictures?  These wouldn’t show up until the 1890s. 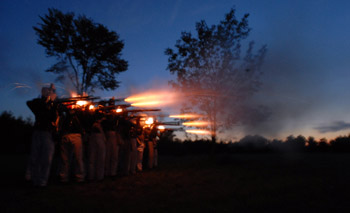 Re-enactments are hardly new in the nonfiction world, in fact they’ve been used for over a century.  Both the Lumière and Edison companies staged re-enactments of actual events in the early years of the 20thcentury. In the 1930s, Knute Rockne, the legendary football coach at Notre Dame, obligingly repeated his locker room speeches for the cameras.  In the 1940s, U.S. soldiers routinely re-enacted scenes for the newsreel cameras.  These earlier re-enactments have an authenticity that comes of men playing themselves.  What we were doing was creating a scene that took place two centuries ago.

Re-enactments are shot in Hollywood style -- scenes are staged and dressed, actors are costumed and made-up to portray people and events from long ago.  The challenge here is that Hollywood production standards are very high.  Audiences expect realistic images and perfectly lit sets and locations. How to do this, when a documentary filmmaker’s entire production budget is often less than the catering costs for one week on a Hollywood set?  How to create the feeling of thousands of soldiers when we can only pay for twenty men at a time?  How to film battle scenes when we can’t afford to show bullets ripping through bodies and heads exploding?  What about battle ships, cannon shots, entire cities on fire?

The answer is to let the tiny stand in for the grand. There are standard approaches, such as filming boots marching in circles around the camera, but that gets old very fast. We used this technique once, to show the British troops at Fort Detroit, in a shot that lasts all of three seconds. For most scenes, we opted for concentrating more on faces: James Madison at his desk, composing his war letter to Congress; the general William Hull cowering in the corner during the attack on Fort Detroit. Two characters in particular emerged as the faces of this war – the British foot soldier, Shadrach Byfield, and the Kentucky rifleman, William Atherton. 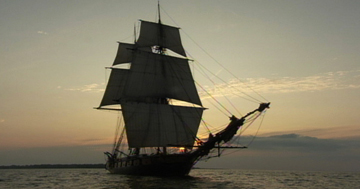 We relied on settings as well as faces to show how certain battles played out. We hired two period vessels, USS Niagara and the Pride of Baltimore, to show the Battle of Lake Erie and the U.S. privateers at work during the war. Our production designer, Peter Twist, assembled crews for all the battle scenes, recruiting from a considerable pool of devoted 1812 re-enactors. Most came with uniforms, and submitted happily to the attentions of our hair and make-up artist, Sue Upton. We resorted to a convenient trick, filming at nightfall, using copious plumes of fake smoke to hide the fact that our battalions of soldiers were a mere twenty re-enactors.

Serious re-enactors are an interesting breed of folks. Most of these men have been reliving battles from the War of 1812 for years. They come to the film set with their own costumes. Some even have three sets of clothing: British uniforms, American uniforms, and militia outfits. I asked one group of men why they would want to play at killing and dying. They said they were Vietnam vets, had been wounded in a real war and yet they still wanted to load black powder muskets, wear scratchy wool uniforms, and sleep on the ground. What they got out of it, they said, was a deeper understanding of history than any book or documentary could provide.
I thought about those real combat vets turned ersatz soldiers when making plans for one of our major re-enactment shoots. Our goal is to give the audience a sense of truth. Perhaps there is some truth in photographic and film archives, but those images are not always trustworthy. Photos can be cropped, films can be staged. When we use them we chose what details to emphasize, what scenes to feature. We do the same thing with re-enactments of course, but the audience knows that what they are seeing is not supposed to be archival. They are a representation of what the filmmaker thinks the world of the past looked like. Perhaps, in some ways, the re-enactment is more honest than the hoary photos and films that we believe are true representations of history. 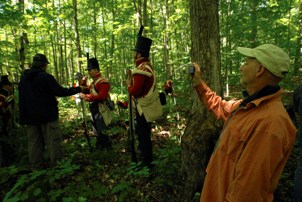