When the War of 1812 began, President James Madison and other U.S. government officials understood that British warships might be able to reach Baltimore and other strategic Maryland and Virginia ports via the Chesapeake Bay. However, the bay made the politically and economically vital Chesapeake tidewater region far more vulnerable than they had ever imagined. Even Washington, D.C., the nation’s capital, was open to attack from the sea, and as it turned out, could not be adequately defended by poorly trained militia.

By 1813, British warships had free run of the Chesapeake, where they blockaded ports, raided coastal communities, and expropriated supplies. The Americans attempted unsuccessfully to fight back using militia and coastal gun emplacements, but U.S. naval resources were so limited that they had no reasonable hope of keeping the powerful British fleet out of the bay. By the summer of 1814, British commanders had begun to believe that they might be able to exploit the obvious weakness of American defenses in the Chesapeake to bring the war to a swift and favorable conclusion. It was all but inevitable, therefore, that the War of 1812 would reach its climax in the Chesapeake Bay region. It was also here that the war would acquire what became, for America at least, its defining image—that of a flag flying in the dawn over a fort outside Baltimore.


Major George Armistead commanded Fort McHenry when the British began their naval bombardment on September 13, 1814. His decision to have a gigantic flag made to fly over the fort gave Baltimore militia and residents a rallying point during the darkest hours of the battle. It also provided Francis Scott Key with the central symbol for his famous poem. Beside the Armistead Memorial is a monument dedicated to General Samuel Smith whose foresight and competent planning helped prepared Baltimore for its successful defense.

This familiar city landmark honors all those who died in the Battle of Baltimore. An Egyptian revival cenotaph, the 39-foot marble monument has a base of 18 layers in recognition of the 18 states that were part of the Union at the time of the war. After 170 years, the Cockeysville marble had decayed so badly that the statue had to be extensively restored during the 1990s. The monument stands on a traffic island on North Calvert between East Fayette and East Lexington, across from the U.S. Post Office and Courthouse.

During the fourth week of August 1814, a substantial force of British regulars was put ashore on the banks of the Patuxent River from which point they marched largely unopposed toward Washington. A hastily gathered force of some 7,000 American troops, nearly all of them lightly trained militiamen took up defensive positions behind the East Fork of the Potomac River. On August 24, a detachment of 2,600 experienced British regulars took possession of a key bridge at Bladensburg, Maryland and then easily dispersed most of the Americans facing them on the west bank of the river. A small group of marines, sailors, and artillerymen under the command of Commodore Joshua Barney stubbornly resisted the British advance, but were eventually overwhelmed. Later that same day, the British under General Robert Ross took possession of the U.S. capital city. A historical marker located near the point where Barney and his men made their stand is located in Colmar Manor, Maryland. The marker is located near the junction of 38th Avenue and the Bladensburg Road (Maryland Route 450).

Built in 1797 and active against the Barbary Pirates of North Africa, the frigate Constellation was placed in ordinary (mothballed) until repaired at the beginning of the War of 1812. At that time, the ship sailed to Hampton Roads, Virginia, where it was promptly blockaded by the British. The ship never fought an active engagement at sea during the war. So extensive were repairs made in 1853 that some question whether the ship seen today is actually the original. A museum devoted to the history of the Constellation is located next to the ship at Pier 1 on East Pratt Street in the Baltimore Inner Harbor District.

Key Sites of the Chesapeake Theater


View War of 1812-Chesapeake Theater in a larger map 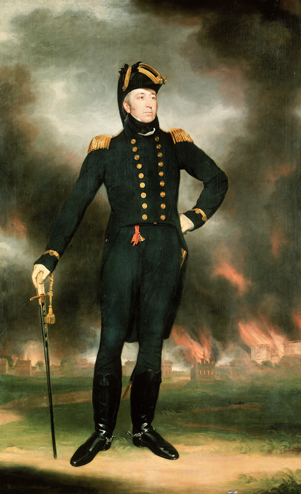 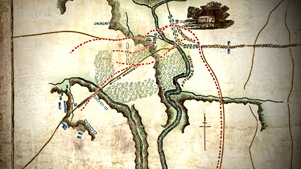 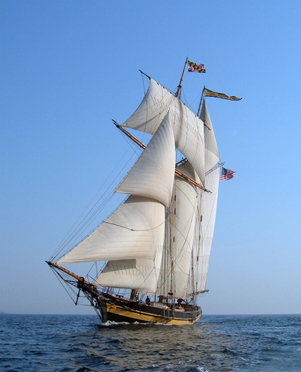 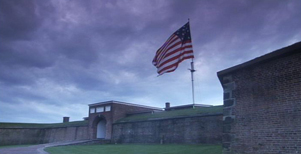