Jacques Pépin: The Art of Craft

Jacques Pépin is known as a kitchen supernova, a working whirlwind of creative energy even at 80 years old, but his surprising journey began in the countryside of wartime France, where his family’s tradition of entrepreneurial women running homegrown restaurants pushed young Jacques into an early culinary career.

It’s an only-in-America story: A roguish young immigrant with movie-star looks, a charming Gallic accent, a populist sense of anything’s-possible optimism, and an ability to raise humble kitchen techniques to a breathtaking art form becomes one of the nation’s most beloved and revered food icons.

Jacques Pépin’s story — which encompasses his contributions to the profession of cooking, food television and the very way we eat today — is a tale even his legions of devoted fans may not be familiar with. Today he is known as a kitchen supernova, a working whirlwind of creative energy even at 80 years old, who crisscrosses the country teaching, cooking, speaking, consulting and enjoying the celebrity generated by 13 successful television cooking series, nearly 30 cookbooks, and accolades ranging from a national Emmy Award (for his series co-hosted with Julia Child) to the French Legion of Honor. But in telling his own story in this documentary profile, he acknowledges that the very notion of being a “celebrity chef” was not only unplanned — it was virtually unthinkable in the profession and world in which he grew up.

The film traces Jacques’s surprising journey beginning in the countryside of wartime France, where his family’s tradition of entrepreneurial women running homegrown restaurants pushed young Jacques into an early culinary career. Leaving home at age 13 to begin a formal apprenticeship, he skyrocketed to the pinnacles of Paris’ great post-war restaurants. By age 21 he was the country’s “first chef,” running the private kitchens for three French heads of state, including Charles de Gaulle. But in an era when even palace chefs were simply “the help,” Jacques yearned for new horizons, and set off for an uncharted life in New York. Within three days he had landed a job at Le Pavillon, the most influential French restaurant in the country, and was soon courted to become the first chef for the new Kennedy White House. In a decision that reveals much about his instinctive humility and unbridled curiosity, he opted instead to improve the food at America’s massive roadside restaurant chain, Howard Johnson’s, where, for 10 years, he mastered an understanding of mass production and American food tastes.

A crippling car accident in 1974 was the turning point that took Jacques from behind the stove toward a new career as a writer, teacher and ultimately a media star. The film brings to life the creation of Jacques’s landmark La Technique, the first American cookbook to focus not on recipes or menus but on the fundamental building blocks of kitchen techniques. The work became a bible for a generation of chefs, both professional and at home, who were beginning to catch up to a world of great food traditions and make them uniquely American. At the forefront was Jacques, who channeled his passion for teaching, his magnetic charm and his uncanny skill with two hands and a knife into a television career that has always emphasized, in the words of his catchphrase, “happy cooking”: honesty of ingredients, simplicity of approach, and a joy for sharing good food with loved ones.

Jacques’ story and personality are brought vividly to life in the film not only in his own recollections, delivered directly to the camera, but also in a trove of unique archival imagery and film, and through the heartfelt testimony of his colleagues and family (including wife Gloria and daughter Claudine, his frequent on-camera collaborator), along with a who’s-who culinary stars and media personalities including José Andrés, Anthony Bourdain, Tom Colicchio, Dana Cowin, Rachael Ray, Marcus Samuelsson and Fareed Zakaria. 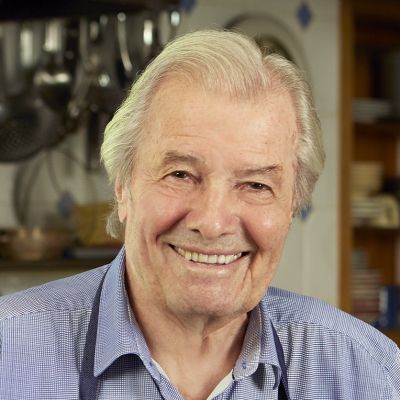 I want to show you how to make it so it looks nice. The smell of the kitchen like when I was a kid, it became very visceral. You know, and so I went to the direction of the restaurant. At that time any good mother would have wanted her child to marry a doctor or a lawyer - certainly not a cook. There was not much glory to it, but it has changed a great deal.

Everyone say, 'I can't cook,' you know, 'I don't have time to cook.' Well you don't need that much time to cook well.

Jacques teaches me something every time I talk to him. His understanding about waste - to never waste food. 'It looks really bad - yeah that's bad; you'll have to cut that piece off.'

It all comes from a different place - that thinking about food.

It did fulfill my life and you know fill my belly, haha. Now it's time to enjoy it.

Albert Einstein: How I see the World
Julia! America's Favorite Chef
Garrison Keillor: The Man on the Radio in the Red Shoes
John Muir in the New World
A Fierce Green Fire - Full Film
Charles & Ray Eames: The Architect and the Painter