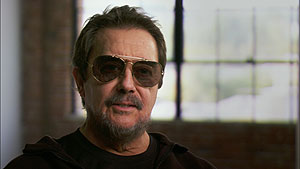 Jim Keltner is one of the world’s most beloved session drummers. A true talent, he contributed to the solo recordings of three out of the four Beatles, Neil Young, Bob Dylan, Eric Clapton, Randy Newman, Arlo Guthrie, Harry Nilsson, Bonnie Raitt, Yoko Ono and many more. Over the course of a decade, Keltner and Lennon established a close friendship, playing together on six of Lennon’s albums. In this interview Keltner gives us perspective on Lennon as a person and as an artist.

Each podcast will consist of slightly edited interviews conducted for the film American Masters LENNONYC introduced by Susan Lacy, series creator and executive producer of American Masters and a producer of LENNONYC and Michael Epstein, director/writer of LENNONYC. New “episodes” will post weekly every Thursday until the Thursday after broadcast on November 22.  The final episode will be a question and answer session using the best questions submitted by users via email at lennonycpodcasts@thirteen.org.  The content will be available here on the American Masters Web site and iTunes. Users can check back in these locations or subscribe to keep up to date with the newest episodes.