Sasha Ivan Soboleff was 26 when the Alaska Native Claims Settlement Act, or ANCSA, was signed into law on Dec. 18, 1971.

“I was teaching in Kake at the time, and I signed up on Kake Tribal, so I have 100 original shares and I was on the original board of incorporators for Kake Tribal,” he said. “I also belong to Sealaska Corp., because that’s the large regional corporation.”

Sealaska is one of 12 for-profit regional Alaska Native corporations the legislation created. It also created many village corporations, including Kake Tribal. Alaska Natives at the time, like Soboleff, enrolled as original shareholders.

Sitting in his small apartment in the Mendenhall Valley, he said he doesn’t think Native corporations can help with economic mobility. 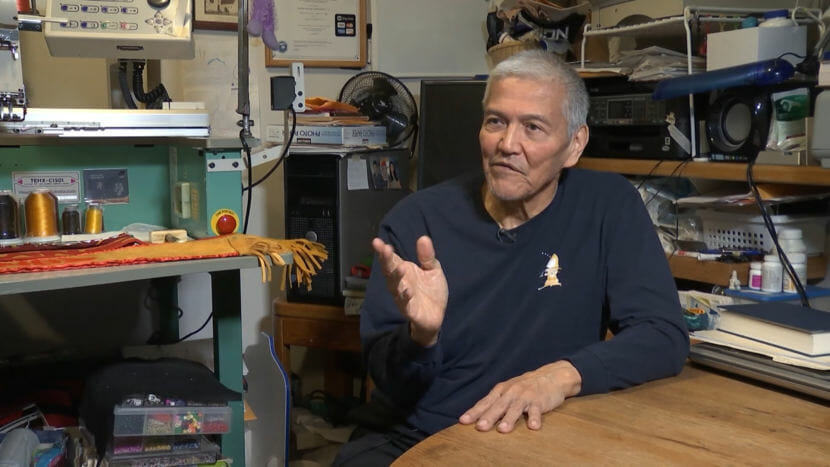 Sasha Soboleff discusses the role of Alaska Native corporations at the his home in the Mendenhall Valley in November. (KTOO video still)

“The business nature of ANCSA corps., which is the formation of an economic vehicle called a profit-making business, is not the way the culture of Southeast Alaska Natives … thinks, or exists,” he said.

Sasha Soboleff was born in Juneau in 1945. That was five years after his parents, Walter and Genevieve Soboleff, moved back to Juneau from the Lower 48. He said his parents instilled in him the value of hard work.

Soboleff is a retired school teacher and principal. He’s the grand president of the Alaska Native Brotherhood.

He said the Native corporations fail to support the culture, and the distributions don’t make up for it.

“I barely even recognize except a couple of times a year when they give out one or $200,” he said. “It doesn’t set the standard for making a culture come alive. … It doesn’t recognize where you live, the lands that your clans and your family has had for years where you pick berries or you go fishing, or where you dry the foods that are going to be due, or you have seaweed. It doesn’t do any of that.”

Rosita Worl disagrees. She is also an original shareholder and recently retired from being a board member of Sealaska Corp. after 30 years. She said the purpose of the corporation is more than just monetary.

“In addition to our economic responsibilities, through employment and dividends, we also have a host of other responsibilities, and things to meet our mission objectives, like scholarships, things to grow, help out shareholders so they could lead a healthy lifestyle.”

Nathan Soboleff, Sasha’s nephew, received one of those college scholarships and an internship with Sealaska. Now he manages grants at Bartlett Regional Hospital in Juneau, where he has his own office.

Nathan Soboleff got a few shares of Sealaska and the village corporation Kootznoowoo from his father. Financially, they’re not worth much.

“I think I received a shareholder check of like $5 before,” he said.

What matters more to him is the connection to the land.

Nathan Soboleff has three young children and looks forward to passing some of his shares along to them.

“They are growing up being raised Tlingit-Norwegians, and they culturally know who they are, and where they’re from, and in the near future, you know, within the next six or seven years, I will give them some of my shares,” he said.

Rosita Worl said she’d like to see Sealaska develop that connection to the land further by advocating for more subsistence rights for its shareholders.

“I’m not saying that we have to go back to a hunting and fishing economies, but I want to see us … moving forward in a way that brings us into the 21st centuries but also allows us to sustain our traditional cultures.”

Rosita Worl, and Sasha and Nathan Soboleff are just three voices among tens of thousands of shareholders in more than 200 Alaska Native corporations. Do you have a story about how your corporations affected your family? Share it at ktoo.org/chasingthedream.