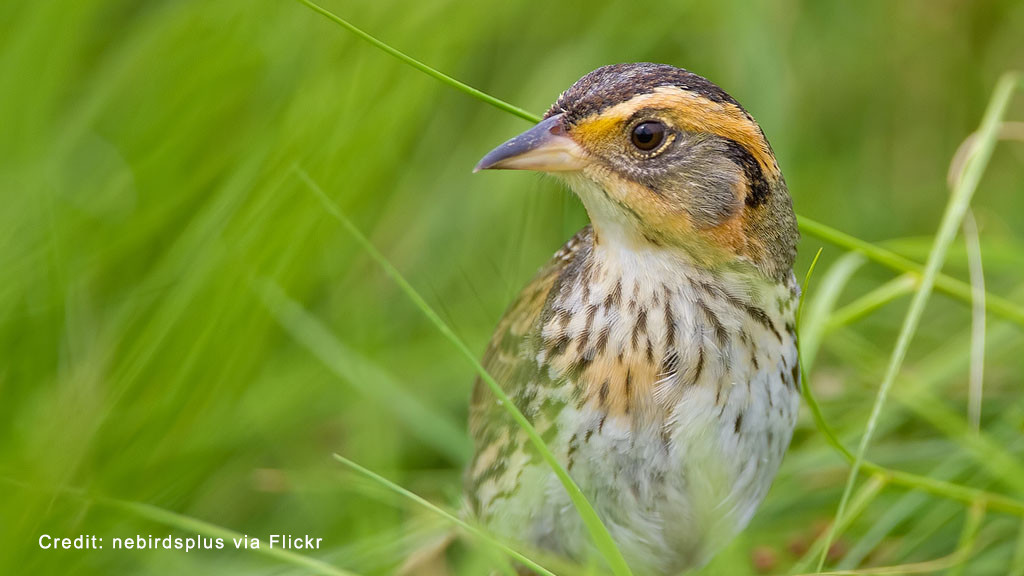 The saltmarsh sparrow is in trouble.

This tiny coastal bird, which weighs less than an ounce, is rapidly disappearing from the eastern United States. Fifteen years ago their population was estimated at more than 250,000. Today it is less than one-fifth that number and continues to drop at an estimated 9 percent a year.

“It could go all the way to extinction very, very quickly,” says Chris Elphick, a researcher with the University of Connecticut who has been studying the birds and their coastal ecosystems.

The saltmarsh sparrow’s vanishing act, although extreme, has mostly gone unnoticed by the public, in no small part due to the bird’s secretive nature and wetlands lifestyle. “It’s still not widely recognized as a bird that’s in trouble,” Elphick says.

The trouble comes from the watery habitats that the birds depend upon. The saltmarsh sparrow, Elphick says, nests in coastal marshes that tend to get flooded once a month during high tides. The birds’ nesting cycle lasts about 23 to 24 days—just a few days less than the 28-day tidal cycle influenced by the moon’s gravity. “If the flooding only happens every 28 days or so, then they can just about fit their nesting cycle between two sets of really high tides,” Elphick says. If high tides are more frequent, the 28-day window collapses; eggs either float away or the chicks drown.

That scenario is happening more and more often, and as a result the birds are disappearing.

So what’s behind the floods and decline? We don’t know exactly, but Elphick says the blame likely rests upon two complementary threats.

First, there’s development. People, it turns out, have built a lot of roads and railways through the sparrow’s habitat. “That restricts the flow of water in and out with the tide,” Elphick says. These man-made structures tend to block high tides from receding, increasing the likelihood of flooding. Meanwhile, they lessen the overall flow of inbound water and the sediment it carries with it. This reduces the marsh’s elevation, putting sparrow nests at greater risk from each successive flood.

And then there’s climate change. Sea-level rise appears to be affecting the marshes, making flooding even worse—a process enhanced by the nearby roads. The birds simply can’t adapt.

“Natural systems have some amount of resilience to change, but if you keep loading things on top of the camel’s back you can end up with complete ecosystem failure,” says Brian Olsen, a University of Maine ecologist who has also been studying the birds decline. “That’s what’s happening here.”

The saltmarsh sparrow isn’t the only kind of wildlife affected by this change. Research co-authored by Elphick and Olsen found that at least four other bird species are experiencing decline in the same coastal marsh habitats. The clapper rail and the Nelson’s sparrow populations, for example, are shrinking about 4 percent a year. That’s not as bad as the saltmarsh sparrow, but as Elphick points out, “if your stock portfolio were declining 4 percent per year, you wouldn’t be very happy.”

Humans may also feel the pinch. “Roads are being impacted by sea-level rise as much as the marshes around them,” Olsen says. “There are plenty of roads along the eastern seaboard that are getting flooded more and more often with higher and higher tides. That’s a real threat to infrastructure. These are things that local municipalities and states need to think about.”

Despite the threats to the saltmarsh sparrow, Olsen admits that he is actually optimistic about the species. For one thing, Olsen, Elphick and other researchers are working with the U.S. Fish and Wildlife Service to gather information that could help to protect the birds under the Endangered Species Act. “If it gets protected, it would be the first bird listed primarily due to things related to climate change,” Olsen says.

Meanwhile, numerous research projects up and down the coast are looking into ways to mitigate or manage the effects of sea-level rise. That will not only help protect people, but could result in the creation of new marshes for the saltmarsh sparrow to call home.

Of course, Olsen points out that the process to create a viable new marsh would take decades. “Our projections right now have the birds at complete extinction within 30 to 50 years,” he says. “If it takes 40 to 60 years to get a marsh ready, there may not be any birds left. That’s kind of a scary place to be.”