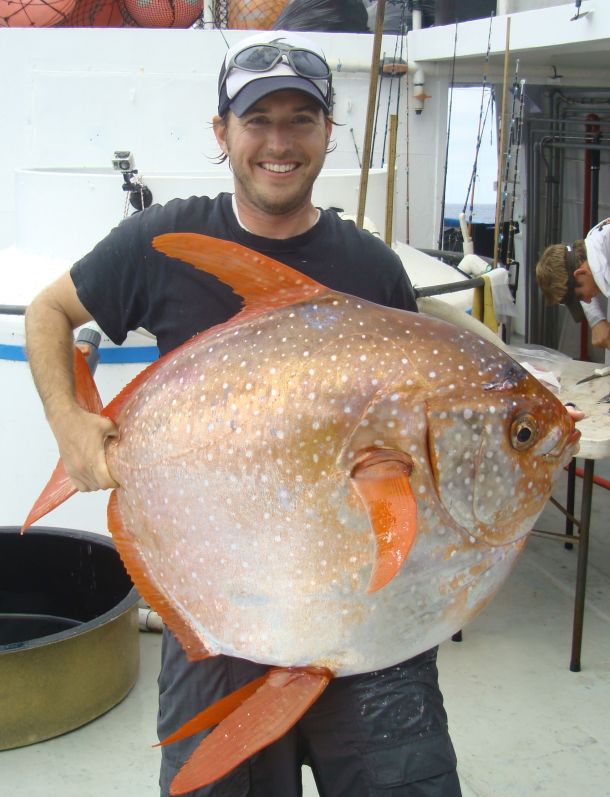 NOAA scientists have discovered that a large ocean-going fish, called the opah, is fully warm-blooded. Their study, published in the journal Science, shows that the fish’s active style of swimming and a heat exchange mechanism in its gills help maintain a body temperature roughly 5 degrees above the surrounding water.

Opahs are a genus of predatory, disc-shaped fish that spend the bulk of their time roughly 150 to 1300 feet (50 to 300 meters) below the ocean surface. Temperatures at these depths hover between 46 to 50 degrees Fahrenheit (8 to 10 degrees Celsius), which initially led scientists to believe the opah lived a rather sluggish lifestyle.

Like reptiles, most fish lack a way to retain heat, so their body temperature tends to match the surrounding environment. The deeper in the ocean they go, the colder it gets, which affects performance of the eyes, brain, heart and muscles — systems critical for chasing down fast-moving prey. A few species of sharks and billfish have developed ways to retain heat in specific body parts, such as muscles, or just the eyes and brain. However, the inability to keep the heart and other internal organs warm ties them to the balmier ocean surface.

Part of the opah’s secret to staying is its peculiar way of swimming. Unlike most fish, which wriggle their body back and forth generating thrust with their tail fin, the opah pushes forward through the water using its pectoral fins. Powering these fins are huge heat-generating muscles that comprise roughly 16 percent of the fish’s body mass.

In addition, the NOAA scientists reports that the opah has an unique arrangement of blood vessels in its gills, the primary site of heat loss in fish. Typically, blood vessels carry deoxygenated blood from a fish’s core to it gills, where it picks up oxygen from the water, but loses heat before returning to the core. In the opah, the blood vessels carrying warm blood to the gills wind around those carrying cold back to the body, minimizing heat loss.

This system, called a “counter-current heat exchange,” is found in other heat-retaining fish, but only for specific muscles and organs. The unique location of heat exchange in the opah’s gills helps it maintain an overall elevated temperature. “Before this discovery I was under the impression this was a slow moving fish like most other fish in cold environment,” said lead author Nicholas Wegner in a press release, “But because it can warm its body, it turns out to be a very active predator that chases down agile prey like squid and can migrate long distances.”