BOB ABERNETHY: British painter Stanley Spencer saw God in everything and painted biblical scenes set in his small hometown of Cookham. It's not unusual in his paintings to see Jesus with the town's butcher, blacksmith, or candlestick maker. Now, for the first time in its history, Washington, DC's Hirshhorn Museum, known for its 20th-century art collection, is presenting an exhibit on Spencer and his religious art. Art critic Martha Bayles reviewed the show. 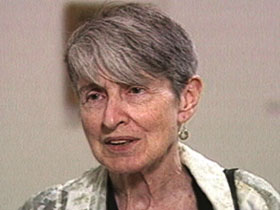 MARTHA BAYLES: Stanley Spencer was a small man. He never grew taller than five foot two. Stanley Spencer lived in a small town. Cookham is an English country village 30 miles west of London on the River Thames. Spencer was born in Cookham in 1891, and except for two world wars, he lived there until his death in 1959. A small man from a small town. And for most of his 68 years, Stanley Spencer was considered a small artist. Twentieth-century art has been dominated by abstraction; Spencer painted people. He painted this self-portrait at the age of 23. Not only did Spencer paint people, but in an age of relentlessly secular art, he painted religious visions. His daughter, Shirin Spencer, remembers.

SHIRIN SPENCER: The Bible was very important to him. And he was, like a friend of ours said earlier, God-obsessed Spencer. He was God-obsessed. And he always saw God in everything. If he was reading the Bible, he saw the events taking place in Cookham, because this was a place he knew and loved. And he just saw Cookham as a Sabbath of heaven, really.

JAMES DEMETRION (Curator, Hirshhorn Museum): It's not all that different, when you stop to think about it, of what the Italian painters in the 15th and 16th centuries were doing with their scenes of the crucifixion brought down into contemporary 15th- and 16th-century Italy. 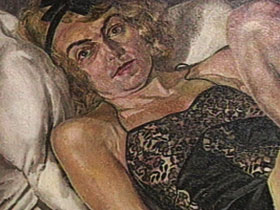 BAYLES: These are not Sunday School pictures. Spencer painted intimate portraits of Patricia Preece, the glamorous freeloader who broke up his first marriage and then abandoned him on their wedding night. And as an official artist in both world wars, Spencer saw enough death and destruction to last a lifetime. He identified with the soldiers and the ship builders, and in this hallucinatory image, scrap iron in a wartime shipyard, he seems to be identifying with the dead.

But Spencer's most powerful theme was not death, but resurrection. He did several resurrection paintings, each one of them fraught with the terror of bodies rising from the grave and with the rapture of souls reuniting with their loved ones. Stanley Spencer died of cancer a few months after painting this final self-portrait. It's not a flattering picture, but neither is it unflattering. It's simply clear, like the eyes, one of them slightly distorted. But that's what human vision is like, slightly distorted. Stanley Spencer saw more clearly than most of us. This is why his reputation is only going to get larger, not smaller. I'm Martha Bayles.

British painter Stanley Spencer saw God in everything and painted biblical scenes set in his small hometown of Cookham. Now, for the first time in its history, Washington, DC’s Hirshhorn Museum is presenting an exhibit on Spencer and his religious art.