BOB ABERNETHY: When this program began last September, we visited a place that we called the “Highway to Heaven.” Afterward, a lot of people wrote and called asking, “Where is this highway? What country is it in?” We reported, and are happy to report again, that it’s in the U.S.A., in Maryland, near Washington, DC, along a stretch of New Hampshire Avenue, just outside the beltway. Since more and more cities now have a similar religious diversity, we thought we’d celebrate this new landscape and the new year with a return visit to the Highway to Heaven. 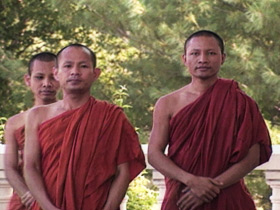 Unidentified Man #1: There’s not any of the great religions of the world that doesn’t have some place of worship along New Hampshire Avenue. Someone else referred to it as, “If you want to see the many faces of God, New Hampshire Avenue is the place to come.”

Unidentified Woman #1: It is the Highway to Heaven. You have anything from the Buddhist Temples to the Vietnamese to the Spanish-language service to our service, which is in both languages.

Unidentified Man #3: We try to do everything like we practice in Cambodia according to our tradition, so the people who just arrived here, they just, “Wow, my arriving to this temple, we just feel at home.”

Unidentified Woman #2: The atmosphere is tranquil, which is something which I don’t find outside of the synagogue. I feel as though I need something like this to sustain me a little bit.

Unidentified Man #4: Most of the people are from the Hindu faith, they come here to worship and we as many as two to 3,000 people sometimes, you know. 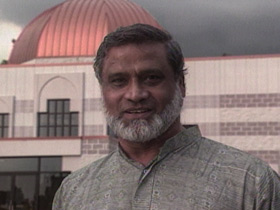 Unidentified Woman #3: I was escaping my country in 1981 and we couldn’t believe it when we came in the United States, we can have our own church like this one. That really is a dream come true for us.

Unidentified Man #5: This country has given us religious freedom, to practice the religion that we would like. Of many countries in the world, this is the place where you can come here and practice religion well.

America’s new religious pluralism raises the question, How does a person of one faith learn to respect the truth of another faith without compromising his or her own deepest beliefs? It’s a subject we’ll explore in programs to come.