BOB ABERNETHY: On April 5, Muslims around the world will begin observing events associated with the annual hajj, or pilgrimage to Mecca, one of the five pillars of the Islamic faith. Million of Muslims are converging on Mecca, located near the west coast of Saudi Arabia, where they will circle the Ka'aba, a stone building revered by Muslims as the first sanctuary dedicated to the worship of one God. Anisa Mehdi accompanies one American pilgrim as he says good-bye to his family and heads off to Mecca for the first time.

ANISA MEHDI: For 1,400 years, Muslims have made their way to Mecca during Dul Hajja, the last month of the Islamic calendar. It once took pilgrims days or weeks of a grueling ride through the dessert. Modern-day pilgrims travel in more comfort, but it's still a long fight. 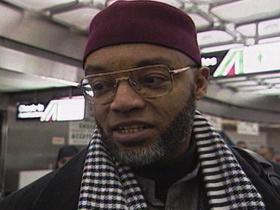 ABDUL ALIM MUBARAK: Hajj is a sacrifice. It is a very personal sacrifice, and it's not something to be taken lightly.

MEHDI: Every Muslim must go once if health and finances permit. During the hajj, millions surround the Ka'aba, which, according to the Qur'an, was built by God. Afterwards, they journey to the foot of Mount Arafat, where the prophet Muhammad preached his last sermon.

Abdul Alim Mubarak chose Islam when he was 21, a quarter century ago.

Mr. MUBARAK: Abdul Alim Mubarak means "blessed servant of the all-knowing." The prophet Muhammad says, "Allah's names are beautiful, submit yourself to the attributes of God."

MEHDI: He was born Ronald Carl Rowe in Richmond, Virginia. He took his Muslim name when he turned 40. His conversion to Islam came amid the political and social upheaval of the '60s civil rights movement and Malcolm X's pilgrimage to Mecca. By 1973, this American-born Christian had found a new path.

MEHDI: What about it made it "it"? 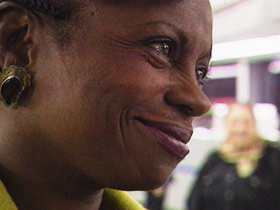 MEHDI: Audrey Rowe, Mubarak's wife of 17 years, is a devout Christian. Their daughter, Selana, studies both faiths. Mubarak is taking three weeks off from his job as an editor for CNN. He's finding that his colleagues are learning something about Islam by watching him practice his faith.

Mr. MUBARAK: I'm level-headed. I'm not a fanatic. I worship the same God that many of them do.

MEHDI: Mubarak is fervent in his commitment. Still, it is hard to leave family behind.

Ms. ROWE: When you love someone, you want to see them fulfill their dreams, and it's about him and his dreams. It's also about commitment -- our mutual commitment to God. I have to admit, anytime there's uncertainty, there's a little bit of uneasiness. So I'm not sure how he's going to be different when he comes back. I just respect that he will be different.

Mr. MUBARAK: You come to your spiritual origins. You return to your human origins. Hajj brings us back to that reality.

MEHDI: Last year, nearly 4,000 U.S. citizens made hajj. Over the next two weeks, an even greater number will be in Mecca with two million fellow Muslims. I'm Anisa Mehdi in New York.

ABERNETHY: We'll stay in touch with Abdul Alim Mubarak, and we'll hear from him about his pilgrimage.

On April 5, Muslims around the world will begin observing events associated with the annual hajj, one of the five pillars of the Islamic faith. Millions are converging on Mecca, located near the west coast of Saudi Arabia. Anisa Mehdi accompanies one American pilgrim as he says good-bye to his family and heads off to Mecca for the first time.

Pilgrims Arrive in Mecca for Hajj