BOB ABERNETHY: The Dalai Lama, spiritual leader of six million Tibetan Buddhists, is touring the U.S. this week, trying to rally support for freedom for his homeland, taken over by China 40 years ago. His visit comes at a time of growing frustration among his people. He preaches compassion, even for Tibet's Chinese rulers, but some of his followers wonder if his methods can work. Jeff Sheler of U.S. NEWS AND WORLD REPORT looks at the Dalai Lama and his dilemma. A warning, some of the footage in this story is disturbing.

JEFF SHELER: He is known as the Ocean of Mercy, Holder of the White Lotus, and protector of the Land of Snows. His followers believe he is the incarnation of a Buddhist god. The Dalai Lama was just 15 years old when the Communist Chinese, under Mao Tse-tung, invaded Tibet, burned its monasteries, and slaughtered upwards of a million of its people. The young Dalai Lama fled to India and set up an exile community for more than 100,000 Tibetans. From there he has led a tireless international crusade for Tibet's freedom, a crusade unflinching in its commitment to the Buddhist principles of peace, compassion, and nonviolence. 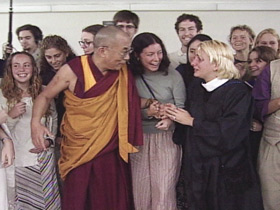 DALAI LAMA: Since our goal is to try to create a zone of peace and try to preserve the culture and spirituality while we carry on the struggle, we should give compassion as our source of strength. That is very important.

SHELER: While opposing violence and confrontation, the Dalai Lama calls for a middle way: dialogue with Beijing as the route for autonomy for his Himalayan homeland.

Professor JEFFREY HOPKINS (Tibetan Buddhist Studies, University of Virginia): He's been open to forgiveness, open to change, and indeed, it must be frustrating that he has been so open to this for so many years and has received so little of response in return from the Chinese Communist government.

SHELER: Now this lack of response is testing the faith of some of his followers, who, while still revering the Dalai Lama, are growing impatient with his nonconfrontational approach.

PSNANG TENZIN (Protester): At this point, most Tibetans, especially young Tibetans, are really confused -- what we really should be doing. On one side we have His Holiness talking about nonviolence, which is not taking us anywhere, so the choice is for us to be violent now. 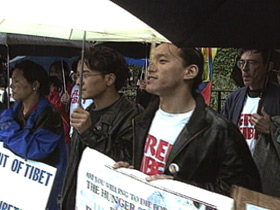 SHELER: For the first time in this 40-year struggle, protests are going beyond mere picketing. Some Tibetans are waging hunger strikes. One protester in India died recently after setting himself on fire, all in hopes of forcing a response from the Chinese government.

The Dalai Lama himself tells RELIGION & ETHICS NEWSWEEKLY that the Tibetan struggle is at a critical and volatile juncture.

DALAI LAMA: The situation inside Tibet is becoming worse and worse. So naturally, more and more people are feeling some kind of frustration. My attitude about these activities, I consider harming oneself also a kind of violence. So I do not agree. These poor people are actually motivated to help the Dalai Lama, to help me, but perhaps with the wrong method. So in order to stop these dramatic actions, I have to offer -- I should have one other alternative -- that is unfortunately not there. So my position is rather difficult. I myself face some sort of dilemma. What to do with these people?

SHELER: His dilemma -- how to keep a political movement alive without sacrificing spiritual principles? For the world's leading Buddhist, there is no separating the spiritual and the temporal, and the only route to political progress is the way of peace and compassion.

Abbot KONCHO PASSANG (Abbot, Drepung Loseling Monastery, India): From the Tibetan viewpoint, we say that whatever His Holiness the Dalai Lama engages in, it is completely related to his own spiritual practice.

Prof. HOPKINS: Rather than resorting to power politics, he makes decisions based on concern for others. 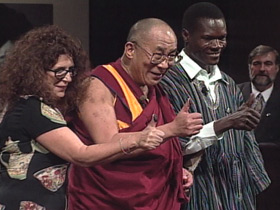 SHELER: To face suffering with compassion is at the core of Tibetan Buddhist belief. It is a discipline the 14th Dalai Lama learned from his earliest days. He was a precocious child when Tibetan monks designated him the successor to the Lion's throne. Installed at age four, he began 18 years of monastic study, but it was the Chinese invasion and his own exile as much as his Buddhist discipline that shaped the course of his life. As he consorts with the powerful to promote his cause, his concern for the lowly continues to amaze.

Professor ROBERT THURMAN (Tibetan Buddhist Studies, Columbia University): He goes to the White House, and he is every bit as interested in and greets with as much warmth the bodyguards and the janitors and the cooks, as he does these, like, puffed-up officials.

SHELER: The Dalai Lama has been so successful in calling attention to his people and their cause that he's become something of a pop culture icon, from Hollywood to Madison Avenue. Some Tibetans worry that their struggle and their faith may be trivialized as a result. That's just one of the challenges the Dalai Lama will continue to face as he seeks to balance his conflicting roles.

SHELER: That may be the ultimate challenge for this smiling and serene man -- whether he can hold a people together and keep them on the spiritual path and be effective in a world of power politics. This is Jeff Sheler reporting.

The Dalai Lama, spiritual leader of six million Tibetan Buddhists, is touring the U.S. this week, trying to rally support for freedom for his homeland, taken over by China 40 years ago. His visit comes at a time of growing frustration among his people. He preaches compassion, even for Tibet’s Chinese rulers, but some of his followers wonder if his methods can work. Jeff Sheler of U.S. NEWS AND WORLD REPORT looks at the Dalai Lama and his dilemma. A warning, some of the footage in this story is disturbing.