BOB ABERNETHY: Welcome back. I’m Bob Abernethy. It’s good to have you with us. We begin this week with stories of trust betrayed, of the abuse of relationships between pastoral counselors and those who came to them willingly seeking guidance and comfort. In our Cover Story, we hear personal tales of the sexual relationship that can develop between some clergymen and some women in their congregations. This is a complex world in which the male pastor is often found guilty of abusing his power and the woman is usually, but not always, the innocent victim. Our correspondent, Mary Alice Williams, begins her report with one woman’s story of her relationship with her counselor.

BARBARA COLARELLI: And so I started going for therapy like once a week. I really didn’t believe in therapy, but with a priest, you know, how could you go wrong? 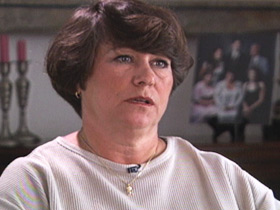 MARY ALICE WILLIAMS: Barbara Colarelli was to learn just how wrong. When she was most vulnerable, after her oldest daughter ran away from home, she turned to the one authority to whom she’s given lifelong obedience and devotion, the Catholic Church, in the person of a Benedictine monk named Joseph Chang.

Ms. COLARELLI: When the session was over, I stood up to leave, and he stood up to hug me like he always did. He kissed me on the cheek. He was caring, like a brother, that’s what I thought. And he kissed me on the other cheek, and then his tongue went in my mouth. And my life has never been the same since.

WILLIAMS: It was the beginning of an abusive sexual and spiritual bond Barbara could neither break nor reveal.

Ms. COLARELLI: The pain was, you know, not having control of my own life, going back like a puppet.

WILLIAMS (To Ms. Colarelli): You were protecting him?

Ms. COLARELLI: I was going to save his soul.

WILLIAMS: Laura McAlpine was her therapist.

LAURA MCALPINE (Therapist): She would do what often battered women do, which is they would ignore the contacts of the abuse and just keep trying to get this person to be good to them, to be loving to them again, to be in the role that they were supposed to be.

WILLIAMS: When Barbara learned that she was not the only woman that Chang was involved with, she reported him to his superior, who she said mocked her and told her to get herself together. 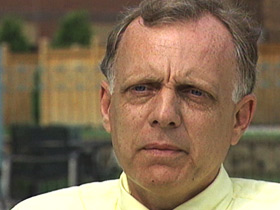 Ms. COLARELLI: It was more excruciating than what Chang did, because now it had a bigger representation. Now this just wasn’t a man, now this was the Church turning their back on me.

MARK LAASER (Consultant): What these people are seeking is a relationship with a person who will hopefully help them be closer to God. That’s why it’s so powerful, and a sexual relationship between a pastor and a parishioner, you know — the damage that happens is spiritual damage.

WILLIAMS: Mark Laaser, ordained in the United Church of Christ, knows just how damaging. He was an abuser.

Mr. LAASER: I was a sexual addict and involved in pornography and other kinds of things, and gradually that addiction crept into my counseling practice. I became sexual with a number of the women that I was working with.

Mr. LAASER: I knew that I was committing sin in my own theological definition, but I had justified it. I had gone through really sophisticated, complicated rationalizations that the relationships that I was having were loving, were mutual.

WILLIAMS: As Laaser learned in recovering, cases like this — the betrayal of a sacred trust — happen, experts say, more than we realize, and they are never consensual.

WILLIAMS: Some denominations have adopted codes of ethics to prevent sexual misconduct, along with procedures for handling cases, but few churches and seminaries have prevention programs. This often remains a dirty little secret many churches do not handle well. It’s usually the woman who gets blamed.

Barbara Blaine was one of them. She founded the support group SNAP, Survivors Network of those Abused by Priests.

BARBARA BLAINE (Founder, SNAP): We find that the Church communities want to disbelieve it. They also tend to frequently want to place blame on the victim. Sometimes they twist the events to that somehow they end up putting the perpetrator on a pedestal.

ELIZABETH GRIFFIN (Counselor): Oftentimes you will see the situation that the victim has been the one to actually pursue and, in my opinion, seduce the minister. 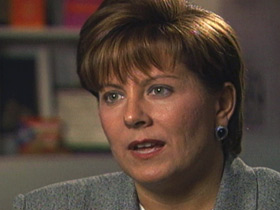 WILLIAMS: That can be particularly true in the African-American church, according to author Marcia Dyson, where single women outnumber men by 3-1. She and her husband, writer Michael Dyson, know first hand.

MARCIA DYSON (Author): You have the cheerleader section where women come to the church specifically not to hear from God so to speak, but to really hear and root on the man of God. They see him as a superstar.

Ms. DYSON: No one has complimented you all week, no one cares about you as a single mother, and this person, you can go to first as a father figure to say, you know, “I’m having problems with my children.” You might get attached to that person because they’re becoming that person who is nourishing you, so this transference goes on, and for that person, this man becomes God.

Unidentified Man: You have properly positioned yourself for the Lord. 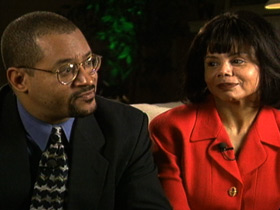 WILLIAMS (To Mr. Dyson): I’m going to ask you this question. Have you succumbed to this?

Mr. DYSON: I have myself have succumbed to those pleasures and delights and contradictions and paradoxes in ministry, so yes, I know first hand what that means, and I know the strain, I know the pain. I’ve felt the rebuff from my own sense of relationship with God, I’ve felt the judgment that comes from having failed an ideal that I aspire to embody.

WILLIAMS: Most states prohibit sexual relations between therapists and clients, but exempt religious leaders for fear of violating separation of church and state. So because of the Church’s reluctance to deal with these issues, debate over how to handle the offenders still rages.

Mr. DYSON: We’ve had either two positions taken. On the one hand, it’s to wink as an old boy’s club and say, “Hey, this is what all the guys do, so let’s just keep stepping here. Let’s pretend that it doesn’t exist.” On the other hand, I think the other shift would be, “Let’s defrock all these ministers,” because if that would be the litmus test for maintaining ministry, a whole lot of brothers and men would have to step aside.

WILLIAMS: Barbara Colarelli’s healing process has been tough. She’s been hospitalized, developed eating disorders, and left the faith she loved. She settled a lawsuit against Chang and the Church. Chang, who admitted having sex with Colarelli but accepted no blame for the relationship, is still a monk.