BOB ABERNETHY: And now our cover story: Can gays become straight? For years, experts have said no, that homosexual orientation cannot be cured by therapy. But first quietly, now with national publicity, some Christians are saying yes, gays can change with religious counseling. The claims are controversial, the data elusive, but as Mary Alice Williams reports, the movement thrives.

Mr. ANTHONY FALZARANO: We are victims. You've been lied to. You were not born this way, and you can heal.

MARY ALICE WILLIAMS: Anthony Falzarano is preaching one of the more controversial and politically incorrect gospels of the day. Homosexuals are made, not born, he says ...

Mr. FALZARANO: How many of you in this room were sexualized before the age of 18? 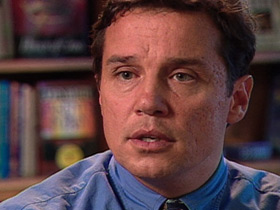 Mr. FALZARANO: Heavenly Father, we come before your throne.

WILLIAMS: They can be delivered from the devil's temptation, according to Falzarano, based on his much-debated theory of child development and a literal interpretation of Scripture.

Mr. FALZARANO: It says in 1 Corinthians 6:9, don't be deceived. Practicing homosexuals will not inherit the kingdom of God.

WILLIAMS: Falzarano is a leader in what's called the ex-gay ministry. The conviction that active homosexuals can't go to heaven fuels more than a hundred groups in America working to convert gays into straights. Until recently, this closeted movement was one of the better-kept secrets of the American church. But for the past few months, conservative religious groups have been running full-page ads in major newspapers. And immediately, the scriptural became political. Gay rights activists called it a deliberate campaign to make homophobia acceptable, and religious leaders debated theology in dueling press conferences.

Bishop HAROLD CALVIN RAY (Redemptive Life Fellowship): The Bible is clear in its teaching that the practice of homosexual lifestyle is sin. It is evil, it is wrong, and contrary to the expressed will of God. 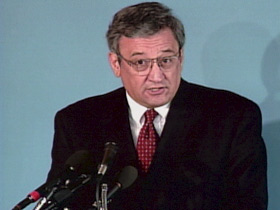 Reverend C. WELTON GADDY (Interfaith Alliance): Competent students of the scriptures disagree on the meaning of a variety of scriptural teachings, including scriptural references to homosexuality.

WILLIAMS: At the heart of it are real people whose hearts tell them they are gay, but whose religion tells them they are anathema.

BOB: I grew up in a place where homosexuality was an evil and terrible thing. So ...

WILLIAMS: A third-year college student, Bob, who did not want his face seen on camera, is a newcomer to these meetings. Having grown up in a strict Southern Baptist family, he's trying to shed the homosexual feelings he has before it's too late.

BOB: And I realized, you know, oh, my God, I'm homosexual. What am I going to do? This just can't be. And I desperately tried to change that then because I thought, you know, I can't be Christian under these circumstances.

SHANNON: I've been pretty clean now since the conference.

WILLIAMS: Shannon, who is married and has two kids, has been coming to these meetings for eight months. But it's been very hard for him to change his behavior or the signals he sends out. 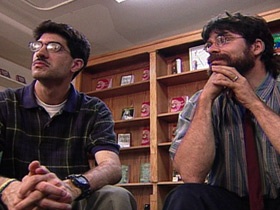 SHANNON: I started a new job, and within a week, there was little birds chirping, "Is he gay?" And that really kind of -- you know, kind of let me know that I've got some work to do.

Mr. FALZARANO: The hair color has got to come out. All the other stuff ...

Voice of Unidentified Man: Tell them you're married.

Mr. FALZARANO: Yeah, you're sending mixed messages to these people. You've got to stop sending the messages off.

WILLIAMS: The notion these men can alter their sexuality is not commonly accepted. In the past, studies have linked homosexuality to genes and concluded it was something a person is born with and that cannot be changed. But Anthony Falzarano claims he's definitely changed. He has been out of a gay life for 14 years now. Married with two children, he says he no longer has any desire for men. And that's after years of living the promiscuous, glamorous gay scene of the '70s in New York, sharing lovers with many men, who later died of AIDS.

Mr. FALZARANO: I had literally hundreds of sexual partners. I should be infected. But I believe God spared me of this disease because of what I am doing today with my life.

WILLIAMS: Anthony credits his transformation to what he calls Christian therapy, prayer, and a total surrender to the teachings of Jesus Christ as Anthony understands them.

Mr. FALZARANO: This is the equivalent of coming off of heroin. And I believe the people who recover from drugs or alcohol, without a faith, it's a really scary thing to walk out of homosexuality, and you really have to have something to hang on to. 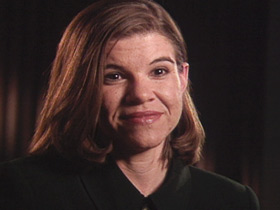 WILLIAMS: Yvette Cantu agrees. Once a radical lesbian living in Los Angeles, she preached the politics of gay rights. Going straight was not on her agenda. And then her officemates introduced her to the prophets, reading passages from the Bible.

Ms. YVETTE CANTU: The little nuggets of truth he was telling me from the Bible were really going down deep. And I was measuring my life against them and saying there's -- this isn't right. There's something wrong with me. It was not easy at all. I figured God has revealed himself to me. I'm born again. I love God. The point was to surrender everything to Christ.

WILLIAMS: Yvette is among the 30 percent of homosexuals the ex-gay movement claims to have successfully cured, though there are no supporting data. And the most famous failures are the movement's founders, two men who fell in love with each other and defected. The American Psychological Association says therapy to change sexual orientation has no scientific basis and may harm the very people it's intended to help. Scott Melendez believes that from personal experience. 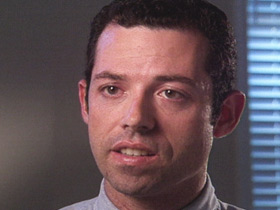 WILLIAMS: Scott is now comfortable with his homosexuality, but when he attended a Transformation ministry a few years ago, he realized many of the people who went to the meetings for seven or eight years were just as gay as they'd been when they first walked through the door, except for one thing.

Mr. MELENDEZ: They had a weaker relationship with God because they had begun to really internalize the thought that God despised a certain part of them.

WILLIAMS: Scott's inability to change from gay to straight took an exacting toll. He was invited by his minister to leave the church he loved.

Mr. MELENDEZ: That was probably the most devastating thing for me because my entire being is -- is involved with my faith. Deep down inside, who I am was a Christian. While, yes, I did -- I did have to leave the church entirely because I was so hurt, the fact that I was a Christian hadn't changed, and God was still calling me. And that's when I finally was like, okay, I'm a Christian and they cannot take that away from me. 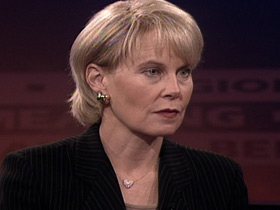 WILLIAMS: But for people like Yvette, Christians like Scott are in the thrall of the devil, their lifestyle one God himself finds abhorrent.

Ms. CANTU: At the same time, my heart goes out to those who are struggling with it. And I hope to be instrumental in their healing process and bringing them to places where they can heal because I don't think this is -- that they have a much more fulfilling life in store for them than they could ever have.

ABERNETHY: Mary Alice, what about the majority, the religious non-gays? What do they think about this movement inside the church?

WILLIAMS: Well, the debate goes on. Because whatever position the churches have taken, inside there's a terrible conflict between the biblical commandments, if you will, against homosexuality and the Christian commandment to love and accept your neighbor. But I want -- I want to share with you what Scott Melendez, who we just saw, having gone through reparative therapy, didn't work, he's back and living an active homosexual lifestyle, said. He said, "I found the audacity was in my telling God he created me wrong. What I learned was that God loves me exactly the way he created me." That was an overriding message that we heard.

ABERNETHY: Mary Alice, many thanks.

Can gays become straight? For years, experts have said no, that homosexual orientation cannot be cured by therapy. But first quietly, now with national publicity, some Christians are saying yes, gays can change with religious counseling. The claims are controversial, the data elusive, but as Mary Alice Williams reports, the movement thrives.