BOB ABERNETHY: As noted, most of the refugees from Kosovo are Muslim. Most of those being bombed in Serbia are Eastern Orthodox Christians, for whom, as we’ve said, this has been Holy Week and this Sunday is Easter. Those juxtapositions have created special tensions for Orthodox Christians in the United States, sometimes pitting their loyalty as Americans against their ethnic and religious ties. Kim Lawton has our story.

KIM LAWTON: America’s more than five million Orthodox Christians began their Holy Week in prayer for the people of the Balkans. On Orthodox Palm Sunday, a gathering in Washington also protested NATO air strikes against Yugoslavia.

Revered IRINEJ DORBIJEVIC (Serbian Orthodox): We have brought our tormented, bleeding souls here in the heart of America in Washington, DC, to decry that Kosovo is our Jerusalem and you are destroying it. 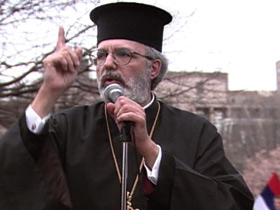 LAWTON: Orthodox Christians from a variety of ethnic backgrounds joined those of Serbian descent in calling for an immediate end to the bombing. And there was deep resentment that the air strikes continued during the holiest week of the Orthodox calendar.

LAWTON: There was more ambivalence in the Albanian Orthodox community, which is deeply concerned about the plight of ethnic Albanian Muslims and Christians.

Reverend ARTHUR LIOLIN (Albanian Orthodox Archdiocese in America): Most Albanian Orthodox in the United States and elsewhere would support any efforts which would stop genocidal acts. Enough is enough.

LAWTON: Several times this century, war and political upheaval in Europe forced many Orthodox Christians to emigrate to the U.S. But the bonds of orthodoxy and ethnicity remain strong. For many, the crisis in Yugoslavia has prompted a crisis of conscience fraught with conflicting loyalties.

Reverend LEONID KISHKOVSKY (International Orthodox Christian Charities): The tragedy that is occurring is doubled in its impact because we are feeling the suffering and the agony of both ethnic groups, of both churches.

LAWTON: Many Orthodox Americans also feel caught between their horror over the reported atrocities committed by the Milosevic regime and their fear for family and fellow believers in Serbia and Kosovo.

Reverend MILES ZDINAK (Carpatho-Russian Orthodox): It’s not that we condone the actions of Slobodan Milosevic, because his actions are certainly barbaric. But bombing a country like this continually without mercy is also just as barbaric. 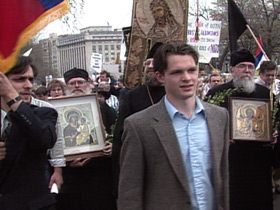 LAWTON: Amid the complexities, Father Arthur Liolin has a plea for his fellow Orthodox believers.

Rev. LIOLIN: I hope that they will also experience in their hearts the suffering of Christ, relate it to the living icons of their Albanian brothers and sisters, and do what they can to heal and to reconcile people here and abroad.

LAWTON: Many Orthodox leaders say their ancient faith may hold some answers for the current crisis.

Rev. KISHKOVSKY: The core of the Orthodox faith is about seeing Christ and the image of God in every single person of every religious faith, of every nationality and ethnic group, which means that that, for me, is a way of breaking the cycle of violence.

LAWTON: Many Orthodox Christians say the Easter season themes of suffering and death have been all too real. They’re also praying to see the hope of resurrection. I’m Kim Lawton in Washington.