BOB ABERNETHY: On May 16, CBS Television will begin a two-part miniseries, “Joan of Arc,” about the 15th-century peasant girl who became a French national hero and a Roman Catholic saint. She was burned at the stake in 1431, but 500 years later Saint Joan is getting lots of new attention within pop culture as well as many other arenas. Kim Lawton has our special report on the Joan of Arc phenomenon. 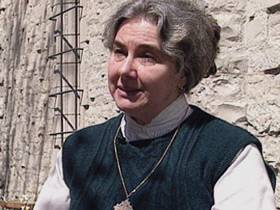 KIM LAWTON: Was she a saint or a sorceress, a feminist, the original Protestant, a lesbian, or maybe a transvestite, a military genius, a schizophrenic, or a prophet, perhaps, whose ultimate message would only be understood in the 20th century? Five hundred years after her death, Joan of Arc is being given new scrutiny through modern eyes.

Professor MARY BETH TALLON (Editor, Joan of Arc at the University): She is very broadly appreciated and claimed by many diverse groups, many diverse disciplines, many polar opposites, extreme right, extreme left; a view of her as a saint and as a terrorist, a view of her as a witch and a bitch and, of course, as a great and wonderful holy woman and as a simple human heroine.

LAWTON: Many cultural observers see a new and surprising revival of interest in the numerous facets of Joan of Arc.

LAWTON: This high-profile CBS miniseries is just one example. At least one major motion picture is also in the works. There are new Joan of Arc books coming out, from children’s books to novels to scholarly analyses. There are hundreds of Web sites dedicated to Joan, from traditional Catholic to academic, gay and lesbian, and witchcraft sites. And there’s music, CDs inspired by Joan’s life, even a new post-punk rock group called Joan of Arc. 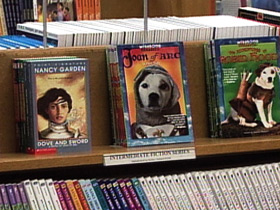 LAWTON: It’s all a little ironic, given that Joan lived in the early 15th century, during the Hundred Years War, when England occupied much of France. As a teen, Joan began hearing mystical voices. She believed it was God instructing her through the voices of Saints Michael, Catherine, and Margaret to save France. And so, dressed in male clothing, Joan set out to obey. She led the army in several successful battles and then helped crown a French king. Eventually, Joan was betrayed, captured, and imprisoned. French Catholic leaders conspired with the English to put her on trial for heresy and witchcraft. Joan was burned at the stake at the age of 19.

LAWTON: Certainly the romance of Joan’s story has long inspired artists and playwrights and screenwriters. But today, beyond the drama there appears to be a new interest in Joan’s spirituality, which put her in conflict with the Church. 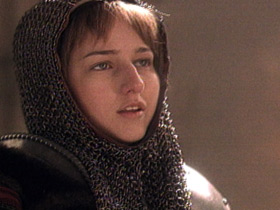 (Excerpt from “Joan of Arc”)

CLARE TALLON: Joan’s spirituality cut through all the dogma, and she interpreted God’s word by herself.

LAWTON: Twenty-five years after Joan was burned at the stake, the Catholic Church nullified the verdict against her, and more than 400 years after that she was declared a Roman Catholic saint. But for many Catholics, she’s been more an inspiring model of bravery than a spiritual guide. That may be changing. Virginia Frohlick is founder and director of the St. Joan of Arc Center in Albuquerque and its Web site. Frohlick began a Joan of Arc collection as a child, fascinated by Joan’s military exploits. Now, as a charismatic Catholic, Frohlick says her interest has become a spiritual devotion.

Ms. VIRGINIA FROHLICK (St. Joan of Arc Center): She’s drawing me closer to Jesus. She would call herself “daughter of God.” And when I was younger I said, “Oh, that’s only Joan’s title. I’m not a daughter of God and, you know, other women, they’re not daughters of God.” But now I’ve come to realize that, yes, we are all daughters of God, and sons. The men are sons of God.

LAWTON: Interest in Joan is particularly strong at Wisconsin’s Marquette University, site of the Joan of Arc Chapel, a medieval church dismantled in France and reassembled stone by stone. Tradition says Joan prayed here on this very stone.

Prof. TALLON: I think young people are really yearning for a hero that will connect them, for a hero that’s not on TV, you know, and not on video, somebody who, you know, is as good as Rambo, yes, but Rambo who prays. 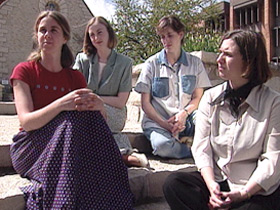 LAWTON: Marquette organized its Joan of Arc festival with the stated purpose of proposing Joan as a contemporary model of humanity and faith. These young women participated in the festival.

(Excerpt from “Joan of Arc”

Ms. TICKLE: So she becomes a real icon for our time, one who understood that organized religion has its place, it has its function, that it’s where God and man meet and do the business of both. But there is another place where man meets the divine, and they’re doing no business at all except the business of the divine.

LAWTON: Not everyone is pleased this Roman Catholic saint is becoming such a universal symbol. The fact that Joan has been embraced by feminists and gays who are critical of the Church troubles some traditional Catholics. 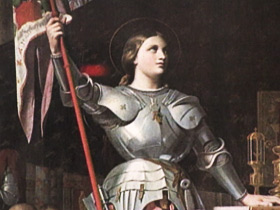 Ms. FROHLICK: I feel a little uncomfortable about that, but I don’t want to deny them the opportunity to love Joan because I believe that Joan, if they will allow Joan, Joan will lead them to the truth.

LAWTON: Still, others believe the diverse identification with Joan may signal a new cultural openness to a different kind of spirituality.

Ms. TICKLE: She’s being accepted into the culture as an example of what dedication to one religion can do for the whole culture. That’s a significant kind of thing.

LAWTON: Even some of those most devoted to Joan of Arc are not sure whether the phenomenon is something deeper than a passing cultural fad. But the more she’s embraced by people from diverse traditions, the more likely she will indeed become a spiritual symbol for our times.