BOB ABERNETHY: For years now, there's been a campaign to make places of worship more accessible to persons with disabilities. But the issue goes beyond just being able to get up the steps or hear the sermon; it's about changing attitudes toward the disabled. Many millions of Americans have physical, sensory, or mental disability, and among them, there's a large pool of worshippers who want to be more than witnesses, who want to participate in or even lead religious services. Judy Valente reports from Chicago.

JUDY VALENTE: A few years ago, this would have been an unusual sight, a retarded man attending church. Houses of worship have been, for the most part, ill prepared to meet the spiritual needs of the physically and mentally challenged. 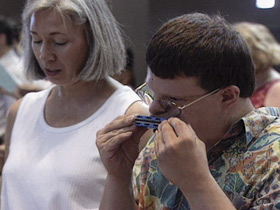 Ms. GINNY THORNBURGH (National Organization on Disability): Their biggest obstacle are people's attitudes about those of us with disability. It is making a decision about us ahead of time, that we can't participate, that we can't be a leader in our congregations, that for some reason, we're inept or inadequate.

Ms. ELIZABETH BROWNE: They thought it would be too awkward, that I would make things look clumsy, awkward, whatever.

VALENTE: Elizabeth Browne, who is blind, wanted to be a lector in her neighborhood church, to read biblical passages during the Mass.

Ms. BROWNE: I wouldn't be taking away from people's spirituality by walking up there and maybe somebody having to show me where the podium is. Somehow it's so different that they don't like it.

VALENTE: But Elizabeth was accepted as a lector at the chapel on the campus where she teaches. 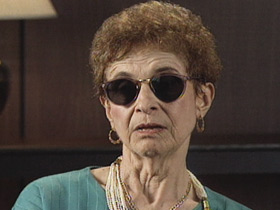 I feel like I have a chance to proclaim, to bring the word to people. Every time I've read, the words sort of stay with me for days and days.

"We are not debtors to the flesh."

I wanted to be an active part, a real part of the community, not just a person sitting in the pew. That's one thing I could do. The word of the Lord.

Congregation (in unison): Thanks be to God.

Unidentified Priest: Vatican II has called all people, not just the clergy but all people, to have a more proactive position in the life of the Church.

VALENTE: A priest is instructing parishioners who want to learn to be ministers of Communion, among them, Tim Marshall, who has no legs.

Mr. TIM MARSHALL: My parents had always given me one great gift, and that's my faith.

UNIDENTIFIED PRIEST: When it comes time for the distribution of Communion ...

Mr. MARSHALL: You want to get involved as much as you can with your church and with the community. And I found that being a minister of Communion was a way to share in the actual part of the Mass which is so important to me.

UNIDENTIFIED PRIEST: We do have a ramp for the disabled, but our project is -- our -- the renovation thing isn't complete.

VALENTE: That means Tim has to remain separate from the other Communion ministers because his wheelchair can't navigate up to the altar.

VALENTE: It is four weeks later. Tim is about to act as Communion minister for the first time. 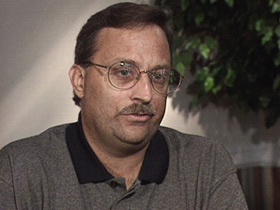 That's what ministry is all about, where the laypeople could get involved with their church and offer something to the church: their time, their effort, their heart, their love, and ...

Ms. JULIE HESS (Queen of Angels Church): It's so good to see you all on this warm summer night.

VALENTE: Persons with mental retardation pose a different challenge. Julie Hess works with them at a church on Chicago's North Side.

Ms. HESS: They have a profound sense of faith. They have a very deep sense of faith because of who they are. They have a different way of knowing than you and I do. They don't understand concepts that are not real and touchable. They need to learn things through life experience.

We need to know we're loved. I do. I think you do, too. Is that right? We need one another.

VALENTE: This church tries to give them a faith experience by pairing each with a companion who develops a caring, one-on-one relationship with them.

Ms. HESS: And in that relationship, they come to know that they are people of dignity deserving to be in friendship with others. And through that friendship, they understand that God's in the center of that love.

Tommy, Jesus says to you tonight, "I am always with you. Rest in my love."

They are very gifted intuitively, and they can know God, but they don't always know what that experience of God is, so we need to help name it for them.

Freddy, Jesus says to you tonight, "I am always with you. Rest in my love." 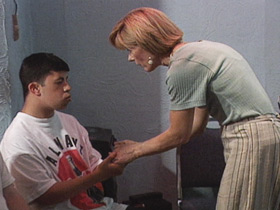 Ms. THORNBURGH: Once we determine to remove the barriers that prevent people with disabilities from a full life of faith -- barriers of architecture, barriers of communication, barriers of attitude -- we open ourselves to a whole new set of gifts and talents that have been excluded before.

Ms. HESS: It is not a movement. It's not a matter of advocacy. It's a matter of converting people. We really need to change people at the grass roots.

VALENTE: Julie Hess calls these people her friends. What she says about them might apply to anyone with a disability who wants the opportunity to participate in worship.

Ms. HESS: And they depend upon people, and they are constantly aware of their vulnerability and their need for others. And that's really what the base of faith is, to understand that we need other people.

Many individuals are hoping to make places of worship more accessible to persons with disabilities. The issue goes beyond just being able to get up the steps or hear the sermon; it’s about changing attitudes toward the disabled. There is a large pool of disabled worshippers who want to be more than witnesses, who want to participate in or even lead religious services.