MARY ALICE WILLIAMS: Homosexuality is certainly among the most contentious issues facing Christian denominations, and it made headlines again this week. The issue continues to be controversial for the worldwide Anglican Communion and its U.S. branch, the Episcopal Church. This week, the Archbishop of Canterbury, head of the Anglican Communion, said he won't recognize two American bishops consecrated in a renegade ceremony last month. Some conservative Asian and African bishops conducted that ceremony. They said they wanted to challenge the liberal positions on homosexuality taken by some leaders of the U.S. church. According to the Archbishop of Canterbury, the ceremony violated church protocol because it happened without the knowledge or permission of U.S. church officials.

And in a related development, an Episcopal Church commission has declined to take a position on gay marriage, leaving the issue of same-sex unions to the individual diocese. The issue will resurface at the church's national convention in July. 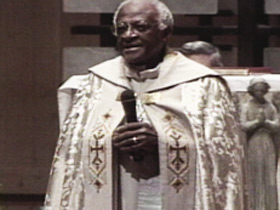 Meanwhile, in Seattle last week, the diocese of Olympia has installed the first openly gay priest to be elected dean of an Episcopal cathedral in the United States. Reverend Robert Vincent Taylor, a native of Cape Town, South Africa, was recommended for the position by his hometown friend, Nobel laureate and Anglican Archbishop Desmond Tutu.

The many Methodist ministers facing trial for defying the church's ban on gay marriages are off the hook. A year ago, they had blessed a holy union ceremony in which two women exchanged marriage vows. For that, they could have been defrocked. But church investigators decided their infractions were not serious enough to warrant a trial.

But the controversy isn't going away. The issue of same-sex unions will be on the table at the United Methodists' quadrennial convention in May. Conservatives are urging an end to what they call blatant disobedience among clergy. Meanwhile, the holy unions continue. Judy Valente reports from Chicago.

JUDY VALENTE: It's an intimate wedding on Chicago's North Side, with flowers, the traditional bridal march, and the exchange of rings. But something is missing: the bride. These two men, who didn't want their faces shown, are being joined in what is called a holy union. The debate over gay unions and gay clergy is tearing apart several mainline Protestant denominations, with both sides apparently determined to draw a theological line in the sand.

Reverend WILLIAM WILLIMON (Dean, Duke University Chapel): The church, through Scripture and through its tradition, has affirmed marriage as a vocation for some Christians, has wanted to uphold that, that sense of a man and a woman and a covenanted, exclusive, lifelong relationship. 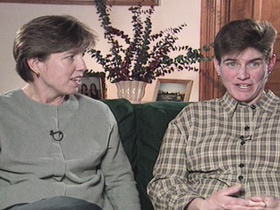 Ms. DONNA TRINKO (United Methodist): God ordained man and woman to be together and to have children.

Mr. JIM CHARLTON (United Methodist): God has ordained, as early as Genesis, what a marriage is to look like. It's a man and it's a woman, and it's for life.

Ms. ALISON WHITE (Accountant): We own a house. We have two dogs. Mary's a lawyer. I'm an accountant. We're expecting a child.

VALENTE: Alison White and Mary Roberts have been partners for nine years, and now Alison is pregnant through artificial insemination. Both are leaders at their Episcopal church. They hold a very different view of gay unions.

Ms. MARY ROBERTS (Attorney): I just don't see what's wrong with two people loving each other and, you know, working together to create a life together. I just don't understand where someone who doesn't know who I am or who Alison is or what our relationship's about can judge us.

VALENTE: It's difficult enough for churches to talk about sex, much less homosexuality. And questioning the authority of the Bible is something they don't even want to think about. But those are two things churches may have to do to resolve the divisive issues surrounding gay clergy and gay marriage.

Reverend BLISS BROWNE (Episcopal Priest): We are generally uncomfortable with having bodies. We don't quite know what to do about the fact that we're sexual beings. Whenever something makes us uncomfortable, when it threatens us -- and sexuality is an issue that generally threatens us -- then we tend to be more judgmental. 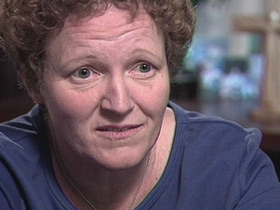 Rev. BROWNE: And in private, pastors recognize that these relationships tend in general to be loving relationships, productive in terms of human life, you know, life-giving to the people involved. And they're therefore not arguing against them in practice. Then it's going to set up a dissonance in the church because we're saying one thing and we're telling people privately something else.

Unidentified Pastor: Our Scripture reading is from the book of John, Chapter 8, verse 1 through 11.

VALENTE: Much of the struggle is being waged over the interpretation of scriptural passages which describe homosexual behavior as "shameful," "unnatural," or "'an abomination."

Rev. WILLIMON: One party says, "By God, this is a matter of biblical interpretation. If we give here, the whole Bible is destroyed." On the other hand, you've got those saying, "It's a human rights issue. If you don't permit gay unions, you're supporting violence against gay and lesbian people."

VALENTE: The Metropolitan Community Church is a largely gay Christian church with hundreds of branches across the country. It provides a spiritual home for Christians who feel alienated from mainline Protestant churches. Its credo is simple. 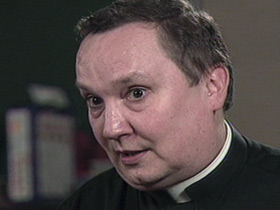 Reverend WAYNE BRADLEY (Metropolitan Community Church): "Whosoever believes in Jesus Christ shall be saved." If Jesus said that, how can any human being, clergy or otherwise, dare to disagree?

VALENTE: Teaching on homosexuality varies from one mainline denomination to another, but nowhere is the battle more divisive than within the United Methodist Church, the nation's second-largest Protestant denomination. For example, last summer, Pastor Greg Dell of Chicago was suspended from the Methodist ministry for blessing the holy union of two men.

VALENTE: Last winter, in an unusual act of disobedience, 95 Methodist ministers participated in the holy union of two women in California. This video, produced by those opposed to gay unions and ordinations, has gone out to the 1,000 delegates who will attend the quadrennial Methodist General Conference in May.

VALENTE: Scott Field, a leader in the opposition to gay marriage, has what is called a transforming congregation, one that accepts gays but condemns their sexual practice. Field and others believe homosexuality is a choice, but that gays, through prayer and grace, can be transformed, that is, converted to heterosexuality. 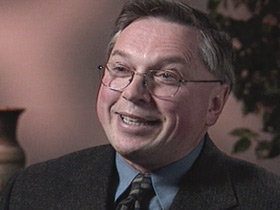 Reverend SCOTT FIELD (Wheatland Salem United Methodist Church): The church has said, "You are welcome to be here," that "Your struggle is important to us. We want to work together on this thing. No one's going to throw you out. We don't have a sexuality detector at the door when people come in. On the other hand, our understanding of what makes for a full human being is included in a heterosexual understanding of the expression of your sexuality."

VALENTE: The Methodist video features a man who says he was formerly homosexual, but is now happily married with two children.

Mr. JAMES GENTILE (Executive Director, Transforming Congregations): And Christ watches us and cleanses us and changes us. But we're just one of many sinners in the church that have been asked to change, because transformational Christianity is all about God's power changing us from what we used to be to what he wants us to be.

Mr. JIM HARVEY (Methodist Divinity Student): I think this is the most dangerous, evil thing that is being produced currently by the mainline denominations. What happens is that people turn back on themselves when they fail, and they mostly do fail. When they fail, they turn back on themselves. They don't blame the church that told them they were bad in the first place. They blame themselves because they weren't praying hard enough, that they didn't love God enough.

Ms. ROBERTS: I know that people -- and they're good people -- feel very strongly about changing people who are different than them. And my response to that is, you know, set aside your fear and accept the differences in other people and accept me for who I am; accept gays and lesbians for who they are. And I -- and let's focus on the real problems in this world.

VALENTE: In 1996, Methodists voted 3 to 1 to ban homosexual unions. Some say the church faces irreconcilable differences over that position and wants those who disagree with it to leave the church. 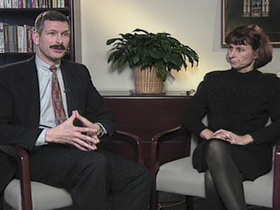 VALENTE: And those who oppose gay unions say they will leave the denomination if such unions are ever upheld.

VALENTE: Many Christians see this as a non-negotiable issue, one that would cause a fundamental change in the way we look at marriage, family, and sexuality.

Mr. CHARLTON: We can have a great discussion and we can be, through that discussion, more understanding of the challenges and of the pain that our brothers and sisters are facing. But we still have to go back to the fundamental, and that is: What does God say about this?

Rev. BRADLEY: No matter what humans say, God loves us.

Rev. BRADLEY: And God has created us in God's own image. And I truly have a personal relationship with my Lord and savior, Jesus Christ, and he accepts me who -- as I am.

Rev. BROWNE: I seriously doubt that God has an opinion about sexual preference, especially in the context of loving relationships. I do suspect God is very disappointed, as must often be the case with God and human, about the way we have badly mistreated each other over this issue.

VALENTE: Like the Methodists, Presbyterians and Episcopalians will confront these issues at meetings later this year. The debate promises to be acrimonious. For RELIGION & ETHICS NEWSWEEKLY, this is Judy Valente reporting.

Homosexuality is one of the most contentious issues facing Christian denominations, A year ago, Methodist ministers blessed a holy union ceremony in which two women exchanged marriage vows. Yet the controversy isn’t going away, and conservatives are urging an end to what they call blatant disobedience among clergy.