KIM LAWTON, anchor: This week, we look at an ancient religious practice: Stopping at certain fixed hours during the day to praise God with prayer and special readings. Phyllis Tickle, of PUBLISHER’S WEEKLY magazine, has been praying this way five times a day for more than 35 years. She’s written a series of books called THE DIVINE HOURS.

Bob Abernethy has our report: 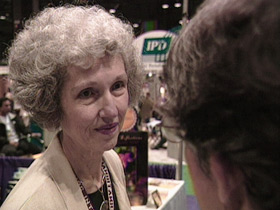 BOB ABERNETHY: As a writer and editor, Phyllis Tickle’s life on the road can be crowded and public. At home, near Memphis, Tennessee, life for Phyllis and her husband, a doctor, can also be stressful. They both have full-time jobs, and they’ve raised seven children. But in the midst of her writing and in the midst of whatever else is happening, every three hours every day Phyllis’ watch beeps. She stops what she’s doing, picks up her Breviary, her book of daily readings, goes to a quiet place and prays.

Mrs. TICKLE: “I will praise thee, Lord, before the peoples, and I will sing praise to thee before the nations for thy mercy is great, even to the heavens, and thy truth unto the clouds. Be thou exalted above the heavens, oh, God, in thy glory over all the Earth.”

I do this because we’re told in Christianity that there must be constant prayer in our lives and, also, that there should be a constant cascade of prayer offered before the throne of God. It’s not petitionary. Unlike most prayer, it doesn’t ask for anything. It simply glorifies God and acknowledges him. It’s also a way, I think, of remembering who it is I’m not and how a — very little I matter.

ABERNETHY: For hundreds of years in the West, Christians’ fixed-hour prayer has been offered almost exclusively by Catholic monks and clergy. Now, according to Phyllis Tickle, more and more Protestants, like her, are discovering the discipline. 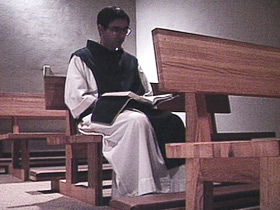 Mrs. TICKLE: Discipline is a growing of muscle. And this is discipline, and it’s the growing of the spiritual muscle. It’s the discipline that allows you even to check out sometimes when you’re in the middle of a meeting, for instance, or in the middle of a high-pressure conversation and that watch beeps I know I drop back, and I’m doing two things at once. It’s kind of organized schizophrenia, but I’m praying. If I cannot get away from the physical situation, I’m praying and talking at the same time.

So you never escape. Once you put that harness on in the morning at 6:00, you never take it off till you lay it down at 10:00 that night. It is there. And like every good work horse, you know, you belong to the man who puts the yoke on. And it is to be yoked. It is to be yoked to the chariot of God.

ABERNETHY: In Old Jerusalem today, bells recall the ancient practice throughout the Roman empire of ringing bells every three hours to signal the events of the workday: time to begin work, time for lunch, and so on. Each hour had its Latin name, and those names — “Terce,” “Sext,” “None” — were taken over by Christians to designate their hours for prayer.

ABERNETHY: The traditional Breviary, according to Mrs. Tickle, can be confusing. 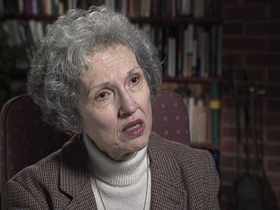 ABERNETHY: So in her manual, Mrs. Tickle has tried to simplify the Breviary, making it more understandable and easier to use. As she keeps the hours, Phyllis insists that, first of all, it is her work for God. But she also acknowledges that fixed hour of prayer has profound benefits for her.

Mrs. TICKLE: It is a way of constantly keeping this open. Regardless of how much I sin, regardless of how many errors I make, regardless of how awful I perceive myself to be at times in my decisions and in my reactions to people and in my greed and lust, I’ve still got this core. I’ve still got, in the middle of my day, in the middle of all of my consciousness, this one passageway, this one place that connects me with the Divine, that’s there, that’s solid, that says, “Are you distressed by all these things you are? Are you heartbroken about all these things you have just done? It’s all right. Come here.” When I’m standing in that one place that is the Divine Office, I know God’s in his heaven and I’m part of that heaven.