BOB ABERNETHY: Since the times of slavery, African Americans have expressed their spirituality through music. It began as simple folk songs and evolved into the energetic performances that define gospel music today. It’s as important to the worship service as the preacher’s sermon. The themes of salvation, emancipation, and deliverance still dominate the songs, as they have [for] centuries. We spoke to Thomas Dixon Tyler of the Metropolitan Baptist Church in Washington, DC, about gospel’s significance to him.

THOMAS DIXON TYLER (Director of Music Ministries, Metropolitan Baptist Church): Gospel music is a free expression. It’s not just a collection of words thrown together, but it’s telling a story. 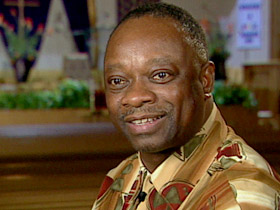 The energy of gospel music comes from its history. Gospel music … is an evolutionary experience from the old camp meeting song and even before that, from the oral tradition. They [African slaves] spoke before they wrote. When they were brought over here, there was a passion within them to keep their history alive. They told their story, and they told it in song because they were a people of music. They were a people of expression.

When you move on to the, the integration of the Negro into mainstream … society, they adopted the white man’s religion, but they fashioned it and shaped it to meet their own personal need[s].

Some of those hymns adopted by the Black church were written by white composers. But yet, and still they spoke of affirmation; they spoke of empowerment; they spoke of deliverance. Regardless of what the situation was, in the fields, in the streets, interesting[ly], they always went back to singing. They were given that by God as their tool to make it.

I look at this as more of a spiritual experience. It’s an experience that took a people from one place of despair and oppression and opened up the windows of possibilities for hope.

Gospel music means good news. It means the resurrection of a people. It means the affirmation that joy will come in the morning. It means that I can do all things through Christ who strengthens me.