BOB ABERNETHY (anchor): On our calendar this week, the beginning of Passover. At the Passover feast, or seder, Jews retell the story of their ancestors’ exodus from slavery in Egypt. We sat in on that retelling by fifth graders at the Charles E. Smith Jewish Day School in Rockville, Maryland, near Washington, DC. They acted out the story for students from the Rockledge public school in Bowie, Maryland. Their principal is Geri Nussbaum. 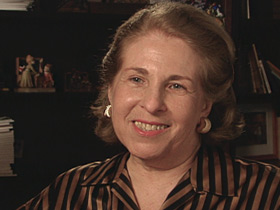 GERI NUSSBAUM (principal, Charles E. Smith Jewish Day School): We are commanded to tell this story as if we ourselves were experiencing the exodus from Egypt, and it is always a tradition among our people to invite guests to our seders.

It particularly is meaningful in that there were many African Americans, because we do share a parallel history, in that, we were slaves in Egypt, and they were slaves here in America.

The story of Passover relates to us our history of many thousands of years ago, when the Jews went down into Egypt as a free people, and then were enslaved by a pharoah.

Moses came to Pharoah and asked for his people to be let go.

Pharoah did not allow the people to leave … until after the ten plagues. 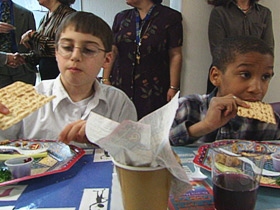 The seder reenacts for us the leaving from Egypt.

The salt water represents, for example, the tears of sadness and sorrow — which we feel we have for our ancestors.

We were given just a few hours to prepare to leave the land of Egypt. There was no time to prepare the dough, and so very quickly, whatever we had was put on our backs, and the dough without yeast, so it could not rise, created the matzo.

Passover is certainly associated with many miracles.

As a people, we’ve survived, and I think we survive because of memory.