BOB ABERNETHY (anchor): Wicca, as modern witchcraft is often called, and its symbol of the five-pointed star, or pentacle, are becoming more visible. Although estimates vary, many scholars believe there are at least 200,000 Wiccans in America today, 70 percent of them women. Deryl Davis reports on what it means when modern witches "come out of the closet."

DERYL DAVIS: It's a May Day celebration in Central Park. Complete with maypoles, ribbons, and dancers. Only this isn't the usual May Day. It's the holiday of "Beltane." And these people are witches.

Wicca, or modern witchcraft, is a polytheistic, earth-based religion. It emphasizes feminism and the environment and encourages diversity of beliefs. It has no theological system or creed, no central text, and no hierarchy. 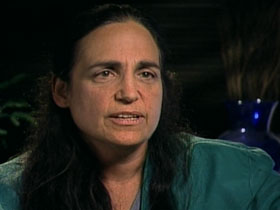 MARGOT ADLER (New York Bureau Chief, National Public Radio): Wicca is about the idea that the earth is real, that the earth is the place where you locate the sacred. That you do not need to die to get the good stuff.

A lot of women who were locked out of the priesthood, or the minister role in their own religions, have come into Wicca because in fact they had a religious calling and this is the only religion that could meet that calling.

DAVIS: A number of Wiccans have come from other faiths, particularly Christianity. But Wiccans say they don't proselytize, and that "coming out" as a witch can be risky.

PHYLLIS CUROTT (Civil Rights Lawyer and Wiccan Attorney): We have high school students who wear pentacles to school and who are then suspended because they are wearing a symbol of this religion. We have people who face job discrimination who are fired because they are discovered to be witches.

DAVIS: Phyllis Curott is a civil rights lawyer who leads a coven, or group, of witches in Manhattan. She says "witch" is still a bad word in American society.

Wiccans emphatically deny that they worship Satan or practice black magic -- stereotypes, according to them, created by Christians hundreds of years ago. Wiccans say they've found divinity within themselves.

Coven chanting: "You are God. You are goddess."

MS. CUROTT: We don't have to have faith that there is a God in his heaven, that there's a transcendent divinity, because we have the experience of the divine, we are able to feel it.

DAVIS: Adults aren't the only ones interested in Wicca. Pop culture depictions of powerful, attractive witches have enchanted growing numbers of teenagers. 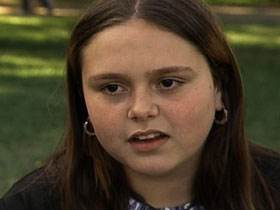 ASHLEY MUSTO (12-year-old Wiccan): You have a spell that could help you with anything you could be worrying about, anything on your mind. If you need to talk to someone, you could pray to a spirit. It's just really, really helpful.

DAVIS: This sort of talk worries people like Marcia Montenegro, who educates Christians about the dangers of the occult.

MARCIA MONTENEGRO (Christian Answers for the New Age): Christians definitely ought to be aware that witchcraft is very appealing to teenagers. A lot of teenagers today are actually targeted by the publishers of occult books. Web sites also will have information for teenagers and encourage their interest.

RON SIMPSON (Church Youth Leader): The subject is being thrust on our youth almost constantly. I want to be able to dialogue with them around the issues and to understand the pros and cons -- what the actual practices are and what [they] may not be.

DAVIS: Wiccans say they don't target anyone. They point to the "Wiccan rede," their ethical code: "and thou harm none, do what thou wilt."

CATHERINE RIGGS-BERGESEN (Psychologist): Wiccans believe that whatever you do comes back to you three times. It's an awesome responsibility to know, but it also keeps you pretty straight.

DAVIS: Catherine Riggs-Bergesen is a psychologist and magic shop owner. She says Wiccan magic is meant to help, not harm.

MS. RIGGS-BERGESEN: I have to tell people that I can't help them with things that hurt other people. There's no danger in sitting in your room and saying some magic words. When we are not thinking ethically about something, that's when people get into trouble.

DAVIS: Wiccans believe there is truth in many faiths, including Christianity. But Christians say Wiccans are worshipping false gods and seeking powers that belong to God alone.

MS. MONTENEGRO: All sorcery, or all manipulation of energy to bring about a desired end, which is basically casting spells, is condemned by God. It is all bad, it's wrong. You are seeking to manipulate energy or power that is the province of God.

MS. CUROTT: When we work spells, what we are doing is going within, we are going to the well of our own sacred gifts, and giving it shape, and form and expression and pouring that divine energy out into the world. 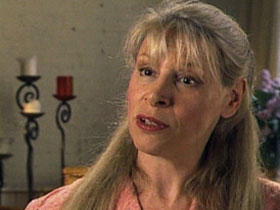 STEVE TSOUKALOS (Asbury Theological Seminary): We're not our own god -- we do not control our own destiny. But God controls our destiny.

DAVIS: Wiccans say that, in the end, it is their experience more than their theology that matters.

DAVIS: Wiccans are unlikely to enter the mainstream of American religion any time soon. But their voices are already being heard more and more.

This is Deryl Davis in New York City.

Wicca, as modern witchcraft is often called, and its symbol of the pentacle are becoming more visible in today’s society. It is a polytheistic, earth-based religion that emphasizes feminism and the environment and encourages diversity of beliefs. It has no theological system or creed, no central text, and no hierarchy.