MARY ALICE WILLIAMS: Buddhism is the world’s fourth largest religion, founded about 2500 years ago in India. The Buddha taught that life is suffering and the way to overcome that is to get rid of attachments. Widely practiced across Asia, Buddhism has attracted many converts in this country. They are developing forms of Buddhist practice that are often very different from the practices of Asian-Americans. Some observers believe there is a growing ethnic divide in American Buddhism. Correspondent Kim Lawton has our cover story. 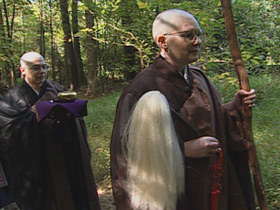 KIM LAWTON: In Chapel Hill, North Carolina, Pat Phelan is being installed as abbess, head of the Red Cedar Zen Temple. She has taken the name Taitaku Josho to demonstrate her acceptance of Buddhist precepts. She is being elevated to her new position in a symbolic “Mountain Seat ceremony,” attended by the Zen Center’s members. Like Phelan, all of the Center’s members are converts to the Buddhist tradition and its sometimes puzzling exchanges.

A few miles across town there’s another Buddhist temple, which people often mistake for a Chinese restaurant. Here Vietnamese Buddhists gather to worship in what’s known as the “Pure Land” Buddhist tradition. Some members of this sangha, or worship community, have been in the U.S. for more than 20 years; others have arrived more recently.

The two Buddhist centers are in the same Bible Belt community, but virtually separate, largely unaware of each other. That’s a situation increasingly common as Buddhism takes hold across America. The forms of practice are diverse, with numerous traditions. But many believe the biggest divide may be an ethnic one. 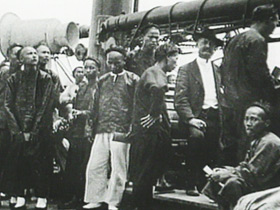 HELEN TWORKOV (TRICYCLE magazine): There’s definitely some divides, and I think we could call it a racial divide. I do not think it’s a racist divide.

LAWTON: Buddhism has always traced a wide cultural path. From its beginnings — 2,500 years ago — in the Himalayan Mountains to its spread across Asia, Buddhism has adapted to and ultimately shaped each culture it has encountered.

Buddhism first came to the United States more than 150 years ago with the arrival of Chinese and Japanese immigrants. Even in those days, there was interest from non-Asians.

PROFESSOR STEPHEN PROTHERO (Associate Professor, Religion, Boston University): There was a sort of Buddhist boom in the late-19th century, and there was a second one that began in the ’50s with the Beat generation and those kinds of people.

LAWTON: In the ’60s and ’70s that boom became a virtual explosion of non-Asian conversions, among them a relatively large number of Jews. Many of those converts now lead their own Buddhist communities, also mostly non-Asian converts.

Precise figures are difficult to come by. Experts say there are between three and four million Buddhists in the United States today. About 75% of them are of Asian heritage. But despite their numbers, many Asian Americans say they don’t feel sufficiently acknowledged in this country’s Buddhist landscape. 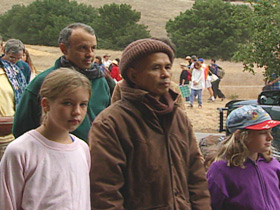 Hollywood and the media have perpetuated the impression that the American Buddhist community consists of mostly-white practitioners who follow charismatic Asian leaders such as Thich Nah Hahn or the Dalai Lama.

LAWTON: Ryo Imamura is an 18th-generation Buddhist priest and a third generation Asian American. His grandfather ministered to the Buddhist community in the early-20th century in Hawaii, and in the ’40s and ’50s, Imamura’s parents began a Buddhist Study Center in Berkeley, California. The Center attracted some non-Asians. Imamura says those times have largely disappeared. He says while Asian teachers may have started Buddhist groups here, white converts now lead them.

PROFESSOR IMAMURA: Racism has to play a role because of the times. I think most Caucasian Americans have not interacted with Asians, certainly not in ways that put Asians in more authoritative roles, or roles of respect. And I don’t know if you want to characterize this as racist, but I think they are much more comfortable looking up to a white, male authority figure, or maybe a female one.

LAWTON: Many say there are clear reasons that Buddhist groups tend to divide along racial lines. In addition to obvious language barriers, there are differences in practice. Most convert Buddhists focus on meditation. Their communities tend to be more lay oriented, with more women in positions of leadership. For some converts, Buddhism is more a philosophy than a religion.

For Asian Americans, the temple has more congregational importance, playing a key religious, social, and cultural role in the community.

LOPON D’ESTRÉE: In a sense, we have two different agendas or maybe cultural agendas. The Asian tradition is based on something they have grown up with and has more ritual aspects. Coming to a service on Sunday is like coming to church anywhere else. Western Buddhists tend to be more interested in learning how to meditate and Buddhist philosophy. So there is somewhat of a clash of cultures.

LAWTON: Cultural divides also exist within Asian-American communities, with little interaction across those ethnic lines either. 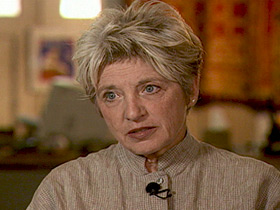 MS. TWORKOV: In some cases, you have communities of these people. I mean they really came out of the killing fields. They came to this country traumatized by the wars in Southeast Asia. Their needs are not only very different [from the] needs of white middle-class Americans, they’re very different from the needs of very well educated middle-class Japanese Americans.

LAWTON: Tworkov’s magazine, TRICYCLE, focuses on the needs of the diverse convert community.

MS. TWORKOV: By nature, the immigrant relationship to religion is conservative. You want to conserve your culture, your values, your heritage, your language. And that is done primarily through the church, the temple, the religious value system. We came along in the ’60s and we wanted to transform everything, so everything was about, really it was like an opposite direction.

PROFESSOR PROTHERO: It needs to be admitted that this is the normal course of things in American religion. We have had a history of Lutheran groups in the U.S. who are Finnish or who are German, who don’t particularly interact with one another. [The same can be said about] the Orthodox, Russian Orthodox Christians, and the Orthodox from Greece, for example, the Greek Orthodox.

LAWTON: But Prothero admits with Buddhism the definitions are more fluid, leading some to wonder whether all the differing strands can still be kept under one umbrella.

PROFESSOR PROTHERO: There is no central authority in Buddhism. There is no Buddhist pope, as much as some like to position the Dalai Lama as the sort of pope-designate for the American scene. There isn’t anyone who can excommunicate you if you have a goofy idea of what Buddhism is all about, or if you try to define Buddhism in a way that is unorthodox.

LAWTON: Some Buddhist leaders believe all of American Buddhism would be enriched by more dialogue and interaction. 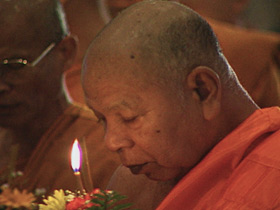 KEN TANAKA (Co-editor, THE FACES OF BUDDHISM IN AMERICA): I certainly feel an excitement in the fact that you do have virtually all the Buddhist groups represented here. And not only for a conference, but living in a same community. Given that, it is always going to be a minority religion, that there ought to be much more interaction, mutual support,… to survive for one thing.

LAWTON: But others on both sides of the divide say that shouldn’t be rushed or forced.

MS. TWORKOV: There’s a lot of concern about bringing the groups together. But frankly my own view is it’s always coming from a place of being politically correct, and there’s not necessarily a good reason for it. There’s no reason why people should not be developing their own kinds of practice and their own forms of practice and working according to their own needs.

PROFESSOR IMAMURA: I think because of the realities of our society, our diverse society, and the need of we, who are called racial minorities or ethnic minorities, to maintain our identity and our pride in our communities, I think we need that racial divide in a way.

LAWTON: Many say the fact that this is even an issue at all shows the extent to which Buddhism has taken root and is maturing here in America.