BOB ABERNETHY, anchor: The scandals in the Catholic church have prompted wide-ranging questions about sexual orientation and practice, among them issues of homosexuality. Experts insist that pedophilia — sexual attraction to children — has no connection to homosexuality. Still, the crisis has renewed attention to the issue of gays in the priesthood — how many there are, what the consequences may be, and whether the Church should be concerned. Judy Valente reports.

JUDY VALENTE: This priest is homosexual.

PRIEST “X”: We’re certainly aware that there are lots of priests who are gay.

VALENTE: The Catholic Church teaches that it is not a sin to have a homosexual orientation. But the Church also says the proper role of sexuality is between a man and a woman, and calls homosexuality “intrinsically disordered.” This has alienated many gay Catholics.

VALENTE: And as for homosexual acts, the Church calls them “gravely sinful.” Although this gay priest is celibate — as all priests are required to be — he does not want to be identified. 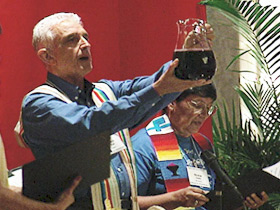 VALENTE: No one has precise figures on the number or percentage of priests who are homosexual. There are only estimates. Sexuality, or sexual preferences, are not subjects easily studied in a scientific survey. But there are many anecdotes and impressions.

Rich Rasi is a gay man who once served as a priest in the Boston area. He is no longer an active priest but recently officiated at a worship service for gay and lesbian Catholics.

Mr. RICH RASI: A lot of the recent literature has said, you know, straight priests are leaving the priesthood because there are so many gay people there’s not a place for them.

VALENTE: Chris Pett, who is also gay, was an active priest in Illinois for 12 years.

Mr. CHRIS PETT: There is absolutely a predominance of gay men who are priests, in my experience.

VALENTE: Richard Sipe, a psychotherapist, has studied celibacy and sexuality in the priesthood for 40 years. Now married, Sipe had been a Benedictine monk for 18 years. He taught in three different seminaries. Sipe estimates that 30 percent of the priesthood is homosexually oriented. 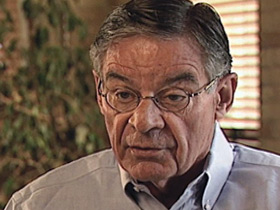 RICHARD SIPE: And by the way, when I say that these men are homosexually oriented, I’m not throwing rocks at them, any more than if I would say they’re heterosexually oriented. Nor am I implying that they aren’t faithful to their vows and practicing celibacy.

VALENTE: Last year, in a widely discussed book, Father Donald Cozzens, then rector of the Cleveland Seminary, wrote of the “growing perception that the priesthood is or is becoming a gay profession.”

Jerome Listecki, auxiliary bishop of Chicago, acknowledges that the priesthood may have a slightly disproportionate number of gay men — perhaps more than 10 percent — but he rejects studies, cited by Cozzens, that [say] as many as 50 percent of seminarians are homosexual.

VALENTE: Why do you think gay men would be attracted to the priesthood?

Bishop LISTECKI: I believe it’s the caring and nurturing nature of the priesthood, which is part of the nature of ministry.

VALENTE: Father Richard McBrien is a theologian at the University of Notre Dame. He says that while gay men may have a sincere vocation to the priesthood, they may be drawn to it for other reasons as well.

Father RICHARD MCBRIEN: Let’s be frank about it. I mean, gay people are persecuted in this society. They’re hounded. They’re looking for respect. They’re looking for a vocation or an occupation or a profession that will give them a kind of immediate respect. And since it’s a celibate profession, people will not automatically say, “Ah, he’s not married.” Doesn’t make any difference. None of us are married.

VALENTE: The priesthood has lost heterosexual men, not only because thousands have left to get married but also, apparently, because of the current climate in some seminaries.

Father MCBRIEN: Some of them who feel they have a genuine vocation for priesthood go into a seminary and feel very alienated by the gay culture. I don’t say this in any homophobic sense. It’s just the reality. 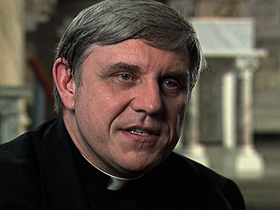 VALENTE: But there is disagreement over whether homosexual priests are having a detrimental effect on “the common good of the Church.”

(to Priest “X”): Does being gay have any impact on a person’s ability to minister?

PRIEST “X”: I guess I’d rephrase the question by saying, does being sexual have an impact on anybody’s ability to minister? And it’s clear that if it does or does not, we don’t have much choice because all of us have a sexual identity. So to answer your question, no.

VALENTE: Some parishioners seem to ignore the issue. Others say it makes no difference if their priest is gay.

Mr. GEORGE MILES (Parishioner): The sexual orientation of a priest certainly isn’t very high on my list of priorities. I look for a spiritual leader, a teacher, a homilist — a guider of the parish and the people in the parish.

Ms. SALLY STREETER (Parishioner): We’re all children of God. And I think their ministry comes from their heart and from their knowledge. There’s no implication to me whatsoever. I don’t care.

VALENTE (to Priest “X”): Do you think that the average Catholic would care if a priest were open about his homosexual orientation?

VALENTE: They would, says this priest, because of common misconceptions.

PRIEST “X”: I think whenever you say “gay” there is association or a presupposition that that means “sexually active.” I think in some people’s minds there’s an understanding that homosexuality is somehow related to pedophilia. I think for some people they really do believe that orientation is a matter of choice. 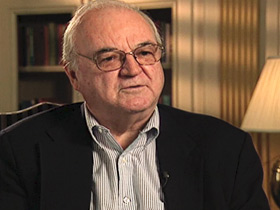 Father MCBRIEN: The real problem that parishioners have today is when they lose a heterosexual priest because he meets someone and falls in love and wants to marry. It isn’t so much an animosity toward the gay as it is a frustration with the system, which allows the loss of really top-notch heterosexual priests to marriage but allows gay priests, who may in fact — I say may — be involved in relationships, can stay in because they’re not going to go up before the altar and get married.

VALENTE: With heterosexual men leaving the priesthood, and with some seminaries apparently becoming increasingly gay, what is the future of the priesthood?

Father MCBRIEN: The fact of the matter is that if these trends continue, the Catholic Church will run out of priests, will certainly run out of heterosexual priests.

VALENTE: Some church officials charge that complaints about too many gay priests are really part of a campaign to make priestly celibacy optional. Richard McBrien says the two issues cannot be separated.

Father MCBRIEN: If you let them get married, you’d have enough priests. And that’s what they’re beginning to say. The pressure won’t come from bishops. The bishops will respond to pressure. The pressure is going to come from the average Catholic family, who will eventually wake up to the fact that there aren’t enough priests around to perform the sacramental services they’ve come to take for granted as Catholics.

VALENTE: Critics of the Church’s teaching on sexuality say it has not kept up with advances in understanding human sexuality. They argue that the Church must reexamine its positions on a variety of issues related to sexual ethics. 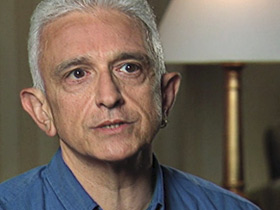 Mr. RASI: All of our sister religions, Christian religions, are talking about this openly. At conventions, in parishes, groups of people are getting together. Bishops are arguing and fighting over it. Ours are not at that point yet.

VALENTE: According to McBrien, the Church has not confronted some of its most sensitive issues.

Father MCBRIEN: Birth control, abortion, homosexuality, divorce — those are our hot-button issues. Why? They’re important issues. It’s because we haven’t resolved them.

Mr. SIPE: The long-term implications of all the “sexual” problems that the Church faces is, I believe, a greater understanding of human sexuality, the spiritual dimensions of it, a more rational approach to sexuality on all levels, and ultimately I believe the development of a theology of sexuality where sex will not be relegated to original sin and all that is bad, and spirituality to everything that is nonsexual.

VALENTE: But for now, whatever the arguments about its sexual teachings, Church officials foresee no change.

Bishop LISTECKI: Two hundred, 300, 400 years from now, the Church’s teaching will be consistent as it is today because it’s rooted in sacred Scripture and it’s rooted in the authentic magisterium, which reflect upon the natural law. It’s not going to change. It won’t change.