Every year, the nonpartisan Faith and Politics Institute in Washington organizes a trip to Alabama to remind members of Congress, primarily, what the civil rights movement was all about. 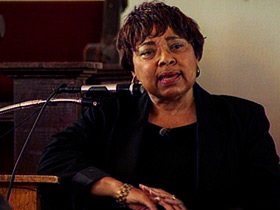 ABERNETHY: One of the leaders of this year’s pilgrimage was Georgia Congressman John Lewis, co-chairman of the Faith and Politics Institute. He was one of the marchers in 1965 who was beaten on the Edmund Pettis bridge in Selma. He talked about the strength of the civil rights movement.

RUBY SALES (Civil Rights Activist): We must remember that it was a bloody victory. Let’s look at the names that remind us that whenever America has been at its best, it’s because free people have brought America ‘long, pushing and shoving, because most Americans want to maintain the status quo.

ABERNETHY: En route from Montgomery to Birmingham, members of the delegation watched a video history of the civil rights era.

TV NARRATOR (from documentary): Racial tensions gripped the country. And President Kennedy was moved to action. On June 11 he took a stronger position than any president since Lincoln, calling civil rights a moral issue:

President JOHN F. KENNEDY: Now the time has come for this nation to fulfill its promise. 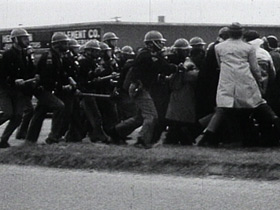 Rep. LEWIS: The movement became a religious movement. It was the hymns of the church, but it was not just the hymns. It was the teaching of the great teachers, the prophets. The teaching of Gandhi and all the great religions of the world, coming together to give us the necessary power and strength.

ABERNETHY: Later, the group posed for pictures at the 16th Street Baptist Church in Birmingham, where in September of 1963, dynamite planted by Ku Klux Klansmen killed four black girls.

Rep. LEWIS: When we come here, we really and truly stand on holy ground.

Rep. RICHARD GEPHARDT (D-MO): The values and beliefs that come out of the religion taught in churches like this was the driving force in getting people to participate in a nonviolent political movement.

Sen. SAM BROWNBACK (R-KS): The movement, being nonviolent, has a powerful statement to it as well. It wasn’t that we’re going to beat people back with sticks and accomplish this. No, we’re going put our own bodies on the line, like Jesus did.

Rep. LEWIS: Many of us saw our involvement in the civil rights movement as an extension of our faith. This movement under the leadership of Martin Luther King Jr. not only liberated a people, but it liberated a nation.

Commemorating the 50th Anniversary of the Civil Rights Movement, March 4, 2003 Howard University: "The Big Six: John Lewis and His Contemporaries"