BOB ABERNETHY, anchor: Tuesday, April 29th, is Holocaust Remembrance Day, Yom Hashoah. It is a solemn tribute to the six million Jews put to death by the Nazis before and during World War II.

Yom Hashoah also reminds us of the range of reactions to Nazi persecution. Some people looked away; some risked their own lives to help; and religious believers were in both camps.

Today, Betty Rollin tells the story of a woman who survived the Holocaust as a child because of the heroism of Christians who protected her.

BETTY ROLLIN: From the Nazi point of view, it was a particularly good idea to kill young Jewish children. First, they represented a Jewish future, which the Nazis wanted to eliminate. Second, young children were useless. 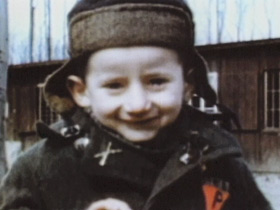 STEVE LUCKERT (Curator, U.S. Holocaust Memorial Museum): The children, unless they were teenagers, could not provide forced labor. Children, infants, pregnant women were immediately sent to the gas chambers. There were some children that survived in the camps. In Buchenwald, there were 1,000 children that were kept there. Some were hidden by other prisoners. There were also some that survived because they were chosen for medical experiments.

ROLLIN: In 1939, there were about 1.6 million Jewish children in the countries that Germany was to occupy. By the time the war ended in 1945, more than a million of those children had been killed.

Many of the children who survived the Holocaust were transported out of the country. Others were hidden, often in convents, monasteries, and orphanages.

Seventy-two-year-old Flora Singer, who lives in Potomac, Maryland, was 10 years old when Nazi tanks rolled into Antwerp, Belgium, where she lived with her mother, Fanny, and her sisters Charlotte, seven, and Betty, four.

Their father had gone ahead to America expecting the family to follow. But they couldn't.

As conditions worsened for Jews, a friend of Flora's father, a German soldier, secretly brought them food. One night he came to the house very late. 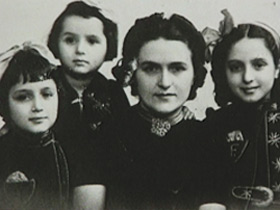 FLORA SINGER (Holocaust Survivor): He says, don't talk, Fanny. Just listen. Take the kids if you can, get out of Antwerp. Just do what I tell you and don't tell anybody.

ROLLIN: This began a four-year period of running and hiding. Their first stop was Brussels, where they found a protector.

Ms. SINGER: We were very fortunate that a Christian neighbor who lived next to the apartment that we rented let us use their name. Mom sent us to school, but we couldn't stay too long because the brother of one of the kids was a Nazi and it was dangerous. Mom met a man through the principal. He took me into his home. His children could no longer bring home friends because I was there. His brother took in my little sister and his secretary took in the third one. He had a cousin who was a Franciscan nun, and she agreed to take us into her convent. She didn't tell the Superior we were Jewish kids. He took us on a flatbed truck. Put each one of us under an empty wooden crate. And around the crate and over the crate, he put crates filled with fruits and vegetables. And we were told, of course, to be totally silent.

ROLLIN: Before they were separated from their mother, she gave Flora a warning about protecting her younger sisters.

Ms. SINGER: "Flora, God help you if something happens to the kids." And that's what she left me with. After the war I did question her about that. "Mama, how could you put such a burden on me? I was so young. Sometimes I didn't know if I was more afraid of you or the Gestapo." So she said, "Flora, did I have a choice? Psychology wasn't the name of the game. The name of the game was survival."

ROLLIN: They had to leave the convent after three months. Next stop was a Catholic orphanage where their identity became known. Again they had to leave. To their rescue came Father Bruno, a Benedictine monk, who had taken it upon himself to hide 300 Jewish children and 90 adults. 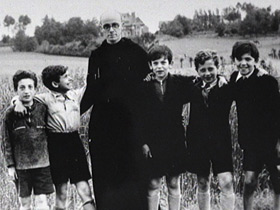 Ms. SINGER: Father Bruno stole blank food ration cards, filled them in with fake names, so every month he went to collect food ration stamps and then distributed them wherever he hid people.

ROLLIN (to Ms. Singer): Why do you think Christians helped you?

Ms. SINGER: Because they were just good human beings and could not stand by to see evil.

ROLLIN (to Ms. Singer): Do you think it was their religion? 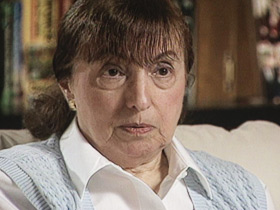 ROLLIN (to Ms. Singer): How did this entire experience affect you?

Ms. SINGER: I had great joy in watching my children be children because I don't remember really being a child, ever.

Mr. LUCKERT: In some of these studies that were done after the war there was an assumption made that these children would be psychologically disturbed forever. That their experiences were so horrendous that they would be forever shaken by these. But in reality, these children showed a great deal of resilience and overcame many of those issues and have lived to tell their stories and have wanted to tell their stories.

ROLLIN: Flora tells her story to children and adults around the country, as do other survivors -- one way, they hope, of making sure the horrors of the Holocaust are never forgotten. For RELIGION & ETHICS NEWSWEEKLY, I'm Betty Rollin.

ABERNETHY: Flora Singer has vowed to honor all those who saved her and her family, and have them recognized in Yad Vashem, the Holocaust Museum in Israel, which honors non-Jewish rescuers.

Yom Hashoah is Holocaust Remembrance Day; a solemn tribute to the six million Jews put to death by the Nazis before and during World War II. There was a range of reactions to Nazi persecution — some people looked away, while others risked their own lives to help. Flora Singer survived the Holocaust as a child because of the heroism of Christians who protected her.