BOB ABERNETHY, anchor: Now, the story of a truly remarkable and extraordinarily brave man. He is a Cambodian, orphaned as a child. Then, before he was a teenager, he became a soldier. Now, as Lucky Severson reports, he is devoting his life -- and risking it, almost daily -- compensating for, atoning for, the harm he once did.

LUCKY SEVERSON: When friends tell Aki Ra to be careful of land mines along the way, they're not speaking of the political kind. They're referring to the kind that blow up people and animals, the kind hidden in the bush where Aki is walking. It's what he does, day after day, for no pay. He defuses and clears land mines so they won't kill or maim any more of his countrymen. 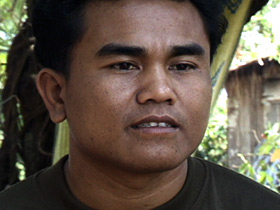 Mr. RA (poking at half-buried mine with shovel): They're very difficult to see buried in the grass.

SEVERSON: On this day, he pretty much knows where they are; usually he remembers only a field or a particular area. After all, he laid mines for over a decade.

(to Mr. Ra): You want to clear those you laid yourself?

Mr. RA: Many, many thousand.

SEVERSON (to Mr. Ra): How many would you lay in a day?

SEVERSON (to Mr. Ra): And you did that day after day?

(picking up a rifle): When I am twelve years old, I use this small one. 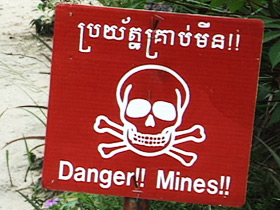 SEVERSON: He was a soldier then, but only a child. It was during Cambodia's bloody revolution that raged during the early 1970s, when one of the world's cruelest despots, named Pol Pot, ordered his forces to commit genocide on his own people. Almost a quarter of the population were murdered or died, and among the two million victims were Aki's mom and dad. He was only nine when he was conscripted to become a child soldier for the Khmer Rouge.

Mr. RA: We don't see at nighttime, we just shoot. We kill many many enemy and shoot machine gun when they come a lot, and shoot. We don't know how many dead, how many injured.

SEVERSON: Aki turned out to be a very brave soldier in the bloody war that erupted between the Khmer Rouge and their age-old enemy next door, the Vietnamese -- first fighting against the Vietnamese until he was captured, and then for them. For both sides, he planted thousands of deadly land mines that can have a lifespan of 75 to 100 years. At the time, he says, he was a soldier doing his duty. Later, he realized what he had done and determined it was his moral obligation to undo it.

(to Mr. Ra): You were too young to know better?

Mr. RA: I understand now I'm big, not same as before, and I know it's not good that I did before in the war, but now I try to do everything good for my country.

SEVERSON: The people of his country are hurting, still paying the price of war. Just about every day, someone steps on a land mine. Last year, an average of three people were killed or maimed every 24 hours.

Ray Worner is a land mine expert. 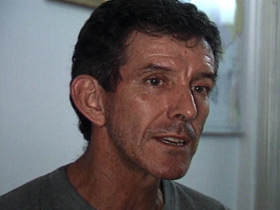   RAY WORNER (Project Advisor, Cambodian Mine UXO Victim Info System): We're looking, total, since our records began from 1979 to the present, around 60,000 people so far have been killed and injured by land mines and unexploded ordinance.

SEVERSON: More than half the victims are children, most often young boys.

Mr. WORNER: They'll throw rocks and land mines, they will throw them against trees to watch them explode. They'll play with them a lot more than anybody else. So boys particularly are very, very vulnerable.

Mr. RA: The village people say here that a lot of people come to dig the ground to grow the banana and then blow up land mines -- some killed, some injured -- many times here.

SEVERSON: It's estimated that 1,300 square miles of Cambodia are strewn with as many as 10 million land mines.

This school, surrounded by warning signs, sits in the middle of a parcel of land, still littered with mines. 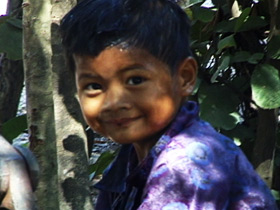 There are international humanitarian agencies methodically clearing the country of mines, but it's very tedious, slow going, and at the current pace, it will take many decades. These agencies discourage impatient Cambodians from clearing the land themselves, because so many become casualties.

Mr. WORNER: You've got a lot of people that they've got such a pressure on the land where they're living. There's no way that they can grow food; they're really subsistence farmers. Everything they grow, they eat. They don't have anything to spare. So they've got really high pressure on just trying to survive, so they're out there clearing the land and they're getting blown up.   SEVERSON: It's extremely dangerous work, clearing and defusing mines. And Aki often relies on local villagers to point them out. One misstep, and one less leg.

Mr. RA (poking at mines in the ground): He happy that I come to clear the land mine around his village. 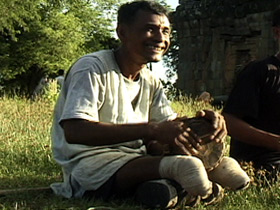 SEVERSON: This is a Russian-made antipersonnel mine.

Mr. RA: Be careful this. You press there, blow up. But we take this off.

SEVERSON: At this stage, one tiny slip and it's over. This close to the mine, Aki would lose his life.

Mr. RA: This the fuse. This the TNT. Look, the outside like old. But inside very new. It's very clean. Fifty years still explode, this mine.

SEVERSON: During the 1980s, when the Vietnamese occupied Cambodia, they fought many battles with the Khmer Rouge here in the magnificent temples of Angkor Wat. The entire area was infested with land mines and for many years, too dangerous for the public -- until international agencies and Aki cleared the mines.

Many of the mines Aki has cleared end up here, in the little land mine museum he built to teach Cambodia and its visitors about the ever-present danger of land mines.   Mr. RA: Pineapple mine.

SEVERSON (to Mr. Ra): Pineapple mine -- I was going to say it's very heavy. This would have killed a lot of people, wouldn't it?

SEVERSON: It's within gunshot of Angkor Wat. This is only a small number of what he has collected. He knows each one intimately.

Mr. RA (holding a claymore mine): From here, one hundred metal like this kill.

If you want to kill the enemy by land mine you put one here and one here, like this.

SEVERSON: He shows how he laid mines to trap soldiers as they walked along.

SEVERSON: His museum has become increasingly popular with visitors from all over the world, many of whom are so impressed with what Aki is trying to do, they stick around to help out. Matthew Healey is an artist from the U.K. 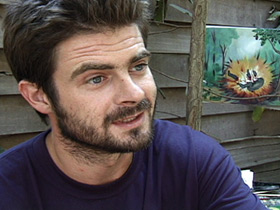 MATTHEW HEALEY (Artist, United Kingdom): Well, I came to Cambodia with the intention of seeing Angkor Wat, and by chance came across this place with very little knowledge of what's actually been going on in Cambodia. I then met Aki Ra and asked if there was anything I could do, and I think I'm going to stay for a couple months now, because it was the most incredible place I've ever been.

SEVERSON: Aki uses the money he receives from donations at the museum to care for young land mine victims. Most come from very poor families, so he pays for their schooling. One day he hopes to earn enough money to purchase prosthetic limbs.

Mr. HEALEY: I think Aki is one of the most down-to-earth people I've ever encountered. I do think, I keep using the same words, "special," "wonderful," but there is something very, very special and wonderful about this place and what Aki Ra is doing here.

SEVERSON: Over the years, because of his dangerous devotion, Aki has become something of a folk hero, in Cambodia and abroad. He says, and those who know him believe him, that fame or fortune will never lure him away from making amends.

ABERNETHY: You may want to remember Aki's words to Lucky, when he said: "I know it's not good what I did before in the war, but now I try to do everything good for my country."

Aki Ra is a truly remarkable and extraordinarily brave man. He is a Cambodian, and was orphaned as a child. Then, before he was a teenager, he became a soldier. Now, he is devoting his life — and risking it, almost daily — compensating for, atoning for, the harm he once did. Ra defuses and clears land mines, the ones he once placed, so they won’t kill or maim any more of his countrymen.