BOB ABERNETHY, anchor: As we reported earlier, this weekend's consecration of Episcopal Bishop Gene Robinson has ignited an international debate about the role of gays in the church. But it's also having an emotional impact at the local level. Some Episcopalians are celebrating what they see as the church's courage, openness, and diversity. Other Episcopalians are lamenting what they believe is a radical departure from Christian teaching. Often, both views are in the same congregation. Kim Lawton has our story of one parish that is wrestling vigorously over what to think and how to respond.

KIM LAWTON: Sunday morning at St. Stephen's Episcopal Church in Richmond, Virginia. St. Stephen's is nearly 100 years old -- in Virginia, the birthplace of American Anglicanism, that's relatively young. It's a large and active parish: about 3,500 baptized members, three different Sunday morning services, and numerous local ministries. Parishioners describe the congregation as middle to upper-middle class, conservative-leaning -- and deeply divided over the appointment of Gene Robinson in New Hampshire, and his approval by the church's national convention. 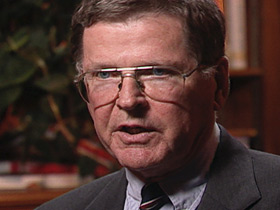 TIMOTHY MCCOY Sr. (Parishioner): My reaction to the news coming from the convention was that of disgust.

WEEZIE BLANCHARD (Parishioner): I was really pleased, just because of the message that it sent of acceptance.

RIKER PURCELL (Parishioner): I thought it was a poor choice. But I also thought if the church in New Hampshire thinks it's best, then perhaps it is best for them.

COTESWORTH PINCKNEY (Parishioner): I think some people were, are, just shocked. And I think, probably the feeling -- I think the feeling that I have and my wife have of just sort of sadness, that we've lost something, is probably the most typical feeling. But I am really amazed at the depth and breadth of concern.

LAWTON: The divisions have set off a series of frank, sometimes uncomfortable conversations about what the parish -- and its members -- believe.

Ms. BLANCHARD: We've had Bible studies. We've had small and large group meetings that have been available. Each of the clergy has been available to talk about this issue, not to try to change anyone's minds, but just to sit and listen.

Reverend THOM BLAIR Jr. (Rector, St. Stephen's Episcopal Church): I've tried to hold up the thought that people are always more important than the ideas that they have, and that even if we do disagree in a serious way, that we can still do that and be faithful members of the Body of Christ.

LAWTON: Episcopalians base their teachings on what they call "a three-legged stool" of scripture, tradition, and reason. But on this issue, applying those three has led parishioners to vastly different theological positions. 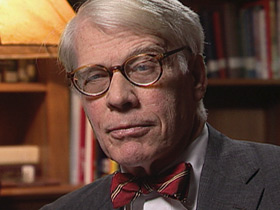 Mr. PURCELL: As an Episcopalian, I have always been taught that it's my obligation to struggle with these issues in the context of the Bible and tradition and faith and reason, and that it's never been a part of my church experience that I had to accept anyone else's interpretation of the Bible.

Mr. PINCKNEY: I think there are some rules that are so, to me, so ingrained in the faith, that, really, everybody ought to observe them.

WILLIAM DUKE (Parishioner): We, the people, have modified it and changed the traditions, some faster than others. And there are some that I didn't like when they first started, such as the ordination of women, but it worked fine.

Mr. PINCKNEY: If I were a female priest and you said to me, "Well, isn't this the same thing?" Or, "Isn't consecrating an openly practicing gay similar to the ordination of a female priest?" I'd say, "Wait a minute. This is night and day. One was pure tradition, right? And the second one is, is ethics, if you will. It's moral. It's a rule. Right? It goes against at least the traditional biblical interpretations."

LAWTON: There are also differences here over whether the U.S. church should take into consideration the strong Third World opposition to a gay bishop.

Mr. DUKE: I would be willing to try it, but the overseas feedback we're getting, where whole national churches will be so antagonized by what we proposed to do, I think this is going to ruin and hurt the Anglican Church on an international basis. 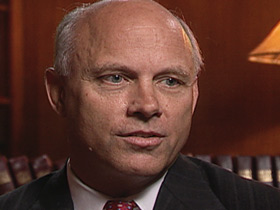 Mr. PURCELL: I used to think -- and still think with some pleasure -- that there's a big world of Anglicans. But if those Anglicans are going to be heavily doctrinal and insist that I obey a doctrine from somewhere else, then I would say that maybe that would be a good thing to split over. I would rather be in a church that is not that way. And if they're that way, then, then perhaps we're not the same church. I don't know.

LAWTON: Reverend Blair encourages a broad interpretation of the Bible, which takes into account the cultural context in which it was written. He personally supports the consecration of Gene Robinson, but he tries to be sensitive to parishioners who believe differently.

Rev. BLAIR: I don't know. We try to, we try to treat people with respect and listen carefully to people, and it's borne, so far, good fruit so far. We haven't blown up yet.

LAWTON: But St. Stephen's has been feeling the impact in tangible ways -- most immediately, in the budget. Some parishioners have already cut back on their donations and on their pledges for the coming year. Others are trying to place restrictions on their money, requesting that it not go to the state diocese or national church. Leaders at St. Stephen's fear some projects, such as a new church startup, may be jeopardized.

There are also concerns that members, even longtime members, may end up leaving the church.

Mr. PINCKNEY: Religion should give someone strength and comfort. That may be a little overly simplistic, but -- I have not been very comfortable in this church in the last several weeks. And if I found a church that was, I thought, was more comfortable, I would -- now that's hard to do after you've been in -- I've been in this church for 50 years, so that's kind of hard to do. But yes, I would consider leaving it.

LAWTON: But others believe an open stand about gays could bring new members into the church. 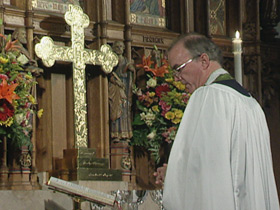 Ms. BLANCHARD: Jesus made it his business to go out and bring people into God's kingdom who had been rejected by society.

LAWTON: Some St. Stephen's parishioners say they are frustrated by the extraordinary focus on this one issue.

Mr. PURCELL: We have plenty of things to worry about, plenty of things to think about. This would be one of them, I mean, the homosexuality issue and the ordination of gay bishops, that's, those are certainly two issues, but there are a great many more issues that a church has to deal with than just those two.

LAWTON: Reverend Blair says he and other local Episcopal priests have been meeting for prayer and moral support.

Rev. BLAIR: Virtually everybody that I know is trying to hold their church together and trying to get through this crisis with as many of our people intact as we possible can.

LAWTON: Despite the difficult journey, many here appreciate the opportunity to wrestle openly.

Rev. BLAIR: Sometimes, when tensions are really high, there's the opportunity to help people see a different way of going ahead, to think a different thought. And that can be hopeful.

LAWTON: But Reverend Blair acknowledges this is indeed a time of testing for St. Stephen's. I'm Kim Lawton reporting.

The consecration of Episcopal Bishop Gene Robinson caused international debate over the role of gays in the church. Some Episcopalians are celebrating what they see as the church’s openness and diversity, while others are lamenting what they believe is departure from Christian teaching. We visit one parish that is wrestling vigorously over what to think and how to respond.