BOB ABERNETHY, anchor: Immigration by Hispanics is just one of many streams of newcomers to this country, some of them pouring into Minnesota. That Land of 10,000 Lakes, including the mythical Lake Wobegon, of lutefisk and Lutherans, is now home to many Muslims -- including the country's first Muslim congressman -- and many East African Somalis; also to Indian Hindus and Laotian Hmong. Fred de Sam Lazaro reports from Minneapolis.

FRED DE SAM LAZARO: It's not international flights that make Minneapolis-St. Paul International so international. It's the cab drivers. About three-quarters of the 600 drivers licensed at the airport are Somali immigrants, and airport officials say in too many cases they've been refusing to transport passengers carrying alcohol, usually in duty-free bags, saying their Islamic faith prohibits it.

STEVE WAREHAM (Minneapolis-St. Paul International Airport, speaking to panel): I believe we have 5,022 documented refusals over the last several years. It has been a serious customer-service problem. 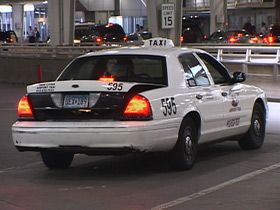 JACK LANNERS (Metropolitan Airport Commission, speaking to panel): I too have received calls and emails from individuals that have been dropped off somewhere between the airport and their destination when it was learned through conversation that they had alcoholic beverages in their luggage.

Across town, Target stores had a more benign response when their Muslim checkout clerks refused to handle pork products. Target reassigned them to other jobs.

All this news produced fodder for conservative radio hosts, bloggers and columnists.

KATHERINE KERSTEN (Columnist, Minneapolis Star Tribune): I am told this is bogus. It is not an issue. Islam does not prohibit touching pepperoni pizza. What about the next time around when the Muslim cab drivers or a minority of Muslims in this community say that they won't transport women wearing tank tops, they won't transport unmarried couples? What about when the Muslim bus drivers make that decision along with cab drivers?

JASON LEWIS (Radio Personality, 100.3 FM News Talk Show): Take this as a sign, folks, of why the current immigration policy of open borders, why the current obsession with diversity training with multiculturalism is doomed to failure.

Senator SATVEER CHAUDHARY (Minnesota State Senate): It used to be in Minnesota the biggest contention amongst diverse groups was Swedes and Norwegians arguing over lutefisk. 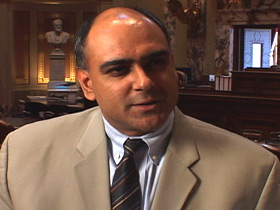 Sen. CHAUDHARY: Now we're dealing with totally different cultures. We've got Germans, Scandinavians now living in the same society as Somalis and Hmong and South Asians. And so these are all the growing pains of a growingly diverse society.

UNIDENTIFIED ACTOR #1 (performing in play "From the Ashes"): Next. Next.

UNIDENTIFIED ACTOR #1: Where are you from?

UNIDENTIFIED ACTOR #2: From Laos, but I'm an American.

DE SAM LAZARO: "From the Ashes" was written and directed by an Indian immigrant couple, drawn from testimony gathered by a local human rights group.

UNIDENTIFIED ACTOR #1: This is a temporary visa. Do you know what temporary means?

MEENA NATARAJAN (Playwright, "From the Ashes"): I think the scene was meant to convey that feeling of fear that has happened since 9/11 -- how people like, you know, who look like me always are random checked before we get into an airplane. So we just wanted to evoke some of those experiences in that scene.

DIPANKAR MUKHERJEE (Director, "From the Ashes"): Before I was always hesitant to talk about these real experiences thinking that I am dampening this joyous spirit of being in America, which I'm very excited about. I mean, maybe America is one of the only countries where I can do this play, critique the fear, critique the politics that is going on in the country and not be put behind bars. Hopefully so. 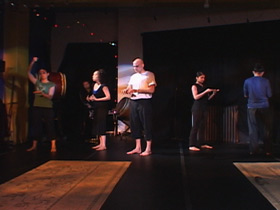 UNIDENTIFIED VOICE of ACTOR: What did he say?

DE SAM LAZARO: Pangea's works often represent the diverse waves of immigrants who've arrived in Minnesota since the 1970s, lured here by a good economy and the presence of major refugee resettlement agencies. They've come from Latin America and across Africa and Asia and brought traditions and houses of worship that are unfamiliar here, including Buddhist temples of various traditions and one of the largest Hindu temples in North America. Last year, when vandals destroyed several icons, there was widespread outrage. It led to the apprehension of two teenage suspects who were sentenced to work at the temple.

Dr. SHASHIKANT SANE (Temple Trustee, Hindu Society of Minnesota): When we invited the community leaders, they came there to show their support. At the same time there's not enough information about other faiths, and something different becomes a target. 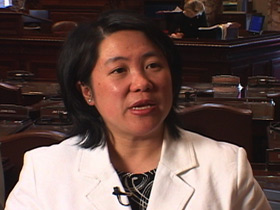 Senator MEE MOUA (Minnesota State Senate): To be an animist is kind of like being Jewish. You can't separate what's culture from what's religion. We have a lot of religious ceremonies that are performed requiring the slaughtering of, you know, animals -- chickens or pigs or cows -- in a particular manner.

DE SAM LAZARO: Those practices ran afoul of local municipal authorities at first, but over the years Senator Moua says a Hmong business community has grown to take on those needs.

Sen. MOUA: People now are using the slaughterhouses. They're not slaughtering a big cow or a pig, you know, at home or in their garages. So, you know, communities evolve.

DE SAM LAZARO: And like the Hmong community, it may take a generation for the newer Islamic community to evolve into its place in the Minnesota social fabric.

MUSLIM GIRL SCOUT TROUP: On my honor I will try to serve Allah and my country to help people at all times and to live by the Girl Scout law. 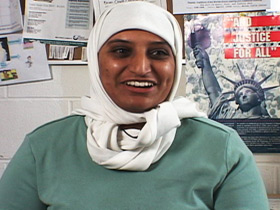 DE SAM LAZARO: Just how different the Somali Muslim community is, or wants to be, is an ongoing debate within the community. The local imams have differing opinions on such questions as the handling of pork or transporting alcohol. Regardless, human rights lawyers told this gathering, everyone's faith and beliefs are protected by the Constitution.

STEPHEN COOPER (Human Rights Attorney, speaking to panel): Throughout the country there are cases going on between virtually every religious group in the courts. It is always hard to come up with exactly where one person's right ends and another person's rights start, and quite often both sides have an excellent reason for believing they're right.

DE SAM LAZARO: Advocates for the airport cabbies have compared their predicament to the Amish community or to Christian pharmacists whose refusal to dispense birth control pills is protected by many states. They suggested the compromise system that would identify drivers willing to carry alcohol. A similar system exists for taxis willing to transport smokers.

ABDINOOR DOLAL (Taxi Driver): Whenever someone comes out with an exposed alcohol we give him the right -- because I'm not willing to carry, but I will look for someone who is willing to carry and call him forward to take the customer.

DE SAM LAZARO: But many airport commissioners acknowledged they heard vigorous public opposition to the middle ground proposal, and the airport will likely be sued. So, as they have throughout American history, the courts may be asked to decide how far a community must go to accommodate the unfamiliar religious practices of a minority, or of a group of new Americans.

Immigrants have been pouring into the Land of 10,000 Lakes. Minnesota is now home to many Muslims, East African Somalis, Indian Hindus and Laotian Hmong — all of whom are trying to find a balance between their cultural traditions and U.S. customs.