BOB ABERNETHY, anchor: Now, a story about two men. One is a doctor, dedicated to providing health care to the people of Haiti, the poorest nation in this hemisphere. The other is a construction tycoon from Boston who made his fortune years ago, but saw no reason to keep more of the money than he needed for his family. Twenty years ago, those two men forged a friendship based on a common commitment to helping the neediest of people. Judy Valente reports.

JUDY VALENTE: At the age of 84, Tom White has led a full life. A Harvard graduate, he won battle stars as a paratrooper in World War II, came home to raise a large family, was chief fundraiser in the Northeast for John F. Kennedy’s presidential campaign, and became a multimillionaire as president of a heavy construction company. But today, Tom White is best known as the man who gave away virtually his entire fortune — about $75 million. 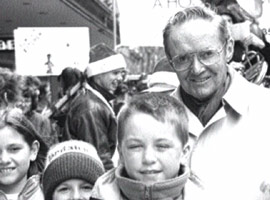 TOM WHITE (Industrialist): I’ve taken care of my wife and my children, so everybody’s okay. What’s the point in having any other money? You see something like 9/11 and you realize there are no guarantees. So, do it now. I have this sense of urgency: take care of things immediately because I could be dead the next day, or the people I want to help could be dead.

VALENTE: White’s generosity has helped many people over the years, but none perhaps more than the people of Haiti. In 1983, he was an anonymous donor to a hunger project directed by a young man named Paul Farmer. Two years later they would meet. White was then a 64-year-old executive; Farmer, a 24-year-old medical student, brash and skeptical.

Dr. PAUL FARMER (Presley Professor of Medical Anthropology, Harvard Medical School): I had these assumptions. Here’s a titan of a local industry from Boston. I had preconceived notions of what he’d be like. I hadn’t met anyone like him, still haven’t to this day. What struck me after the first couple of hours was that he was so moved by what he saw in Haiti.

VALENTE: White teamed up with Farmer to form Partners in Health, which operates this hospital in Haiti’s central plateau. Over the past two decades, White has given more than $30 million to Farmer’s hospital and clinics.

Dr. FARMER: The conditions there are truly intolerable for the majority. No roads. The biggest problem, I think, is a lack of food and water. Half or more of the patients we see in our clinic are patients who are sick because they don’t have enough to eat or clean water to drink. 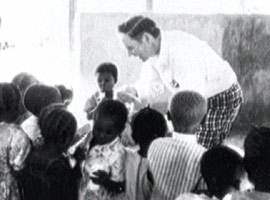 Mr. WHITE: The only way in life to go through life is to look at things from the bottom up. You can never appreciate how bad things are for the truly poor and marginalized unless you do get down to that level and look around.

VALENTE: White saw the suffering in Haiti as an opportunity to put his Catholic faith into action. Many people of faith, he says, still don’t get it.

Mr. WHITE: Even the apostles had a tough time getting it. To get it is to realize that this is our mission on earth: to help other people. Part of it’s religious and part of it’s that I have a natural empathy toward anybody who is suffering. I don’t care who it is.

Dr. FARMER: People ask, “Well, how do people survive in Haiti?” Well, they don’t. They die.

Dr. FARMER (with patient): I’m very worried about her. We started her on treatment for TB and infection. She has more of a chance than the other one.

VALENTE: Rural Haiti has one doctor for every 20,000 persons. Yet some hospitals have empty beds because the poor cannot pay their fees. Farmer’s hospital, where the services are free, sees as many as a thousand patients a day. 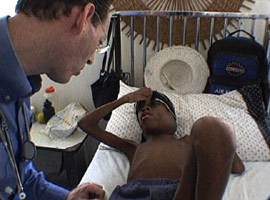 Dr. FARMER: We say at the end of the day we’ve made it through, we got the patients seen, and we saw a lot of patients, and diagnosed a lot of treatable disease. When you do that, treat it, you have the tools, you influence people’s lives on a daily basis — I think that’s very significant.

Mr. WHITE: I’ve played golf several times with people at rich clubs. They ask me what I do. Well, I don’t work in the construction business anymore. I strictly try to help people. They shut right up. They don’t want to talk about it. Well, that’s okay with me. They’re not my buddies. This guy’s my buddy. That’s why I love him so much.

Dr. FARMER: Money is just a — it’s just a tool. You can’t rebuild a hospital that’s falling apart without money. You can’t buy medicines without money. But to me, to stock it up and not use it to serve others, I don’t understand money beyond that.

VALENTE: White still dabbles in real estate in the Boston area. He and his wife live modestly off a managed investment fund. He gives money to the Catholic Church, but only to poor parishes.

Mr. WHITE: I only give to organizations or donors that do not have substantial donors. 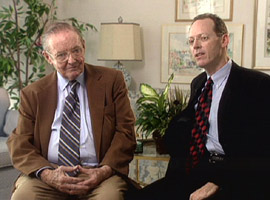 VALENTE: That pretty much excludes his alma mater, Harvard University.

Mr. WHITE: Harvard’s a good institution. I give Harvard nothing, really — a thousand dollars a year, so my classmates will talk to me.

VALENTE: He has left his children stock in his construction company, but no money. They have told him they are proud of what he has done.

Mr. WHITE: I don’t do it because I want to feel good. But I love it. I love doing it. I don’t know what else I’d do with my life. I’m kind of sad that I don’t have a lot of money anymore, that I can’t make out a check for a million dollars, but hey, that’s okay. God can take over now.

VALENTE: Farmer says that although many others have contributed to his work in Haiti, it is Tom White’s support that will allow the hospital to operate for years to come.

Dr. FARMER: You really need that person, or those people, who will say this work is worthy. It’s noble. It needs to be done, and we’ll make sure it gets done.

VALENTE: (to Mr. Farmer): And Tom is that person?

VALENTE: For RELIGION & ETHICS NEWSWEEKLY, this is Judy Valente in Cambridge, Massachusetts.