BOB ABERNETHY, anchor: We have a success story this week about a new public charter school that is educating inner-city children, and preparing them for college. It’s expensive, but it works, and its founders hope to start similar schools all around the country. We went to graduation.

In Anacostia, a notoriously poor and violent section of Washington, D.C. about a mile from the Capitol, a new kind of school is changing hundreds of lives. It’s called The SEED School. It’s a public, charter, college preparatory boarding school, the first in the country. Students are chosen by lottery, not test scores. They are not all brilliant. But this year, each of the members of the school’s first graduating class is going to a college or university, among them Stanford, Duke, Cornell, and Georgetown. 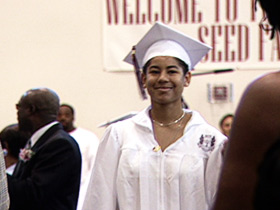 Sophia Echavarria wants to be a writer and is going to Princeton. She recalled her decision to apply there.

SOPHIA ECHAVARRIA (Student, SEED School): I was like, “Whoa! Don’t know if I’m going to get in, but I’m going to apply because I have learned a very good philosophy in life, that you do not know until you ask.” So I applied.

ABERNETHY: The two men who imagined The SEED School, and founded it, were honored at a recent assembly. Both Eric Adler and Rajiv Vinnakota are former management consultants who wanted to leave what Vinnakota calls a better “social footprint.”

RAJIV VINNAKOTA (Co-founder, SEED School): I immediately went to issues in urban education, started talking with friends and one of us said, “Why aren’t there boarding schools for some of these students? Why aren’t there schools that provide a safe, supportive 24-hour environment, along with the rigorous academic curriculum and constant access to role models?”

ABERNETHY: Vinnakota and Adler quit their jobs and, although neither is wealthy, they refurbished a burned out school and built dormitories with $26 million they managed to raise or borrow. Most of the first 7th graders, in 1998, are this year’s graduates. 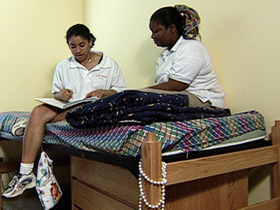 There are now 300 students here — all minorities, almost all from single parent homes with incomes below the poverty line.

The student-teacher ratio is 14 to one, and the curriculum includes both academics and manners. Students live at the school and go home most weekends. Boarding instructors serve as substitute parents in the dorms.

ABERNETHY: Because of the expenses of boarding, the cost per pupil at SEED is $25,000 dollars a year, two-and-a-half times the cost at a normal D.C. public school. Part of that extra cost comes from taxpayers, some from private donors. Three hundred computers were given by Oprah Winfrey.

Vinnakota emphasizes the importance not only of money but of the dedication of those who choose to work at the school.

Mr. VINNAKOTA: It’s just amazing to see the teachers — both the academic teachers, the boarding faculty here, the administrators — and how focused they are on the mission, because this is not easy work. This is very, very hard work, but that type of commitment, when you can bring so many people together, can truly change lives.

ABERNETHY: Vinnakota says he did not help start The SEED School for religious reasons, but that it has become a calling. 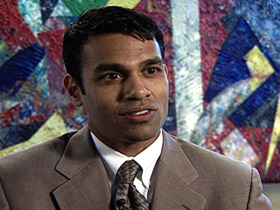 Mr. VINNAKOTA: I have no doubt that this is where I need to be and that the role that I play, to help lead this institution, is the reason that I’m here. Whether or not that’s religious or spiritual is up for debate, but I know what I know. This is what I like to do, what I can do well, and I get up every morning knowing I’m doing the right thing.

ABERNETHY: Every June, the new 7th graders — 40 boys, 40 girls — are chosen by lottery from among D.C. residents who have applied. The families of the winners know that what is at stake is their children’s futures. So do the heartbroken parents whose numbers are not called.

LESLEY POOLE (Director of Admissions, SEED School): I think for a lot of our families, they see it as a ticket for their child’s future. For them it is hope. So I think they look at it and they say, this is what I prayed for. This is what I hoped for.

KAREN HARRISON (Parent of SEED School Student): It’s an opportunity for him to broaden his mind and to be as good as he can get.

CRYSTAL GERMANY (New Student, SEED School): I was real happy because I can get out of the neighborhood trouble, and I won’t have to worry about any of the shooting and be around a lot of negativity.

ABERNETHY: Vinnakota calls the lottery his happiest and saddest day of the year. 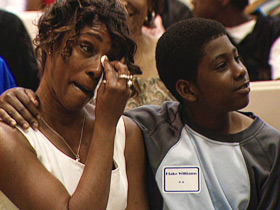 Mr. VINNAKOTA: We have to acknowledge that we are losing a group of children who have all the potential in the world, and unless we do everything necessary they are not going to be successful. Now I’m not advocating that every single student needs to be in a boarding school, but we need to acknowledge that there is a group of students that needs to be in a boarding school, that it can be done and that society needs to actually step up and say, “Yes, we will make the investment to leave no child behind.”

ABERNETHY: Many of this year’s graduates spoke about how much they felt like a family. They are also, as a group, ambitious and impatient to achieve the success in the world the SEED faculty has assured them they can have.

SOPHIA: I believe every word of it.

JACKIE ECHEVERRIA (Mother of Sophia): They asked me to trust them with my child, and I did, and it benefited her greatly. The teachers are what she has been looking for all her life. She worked very hard these six years, very hard. Very powerful girl. Congratulations.

ABERNETHY: Nearly half the students who enter SEED in 7th grade do not graduate here. Some leave because they are homesick, or move away, or want a school with athletics or — even with intense support — do not keep up with the work. But co-founder Eric Adler says the success of this year’s graduates proves the SEED concept works here and can work elsewhere. 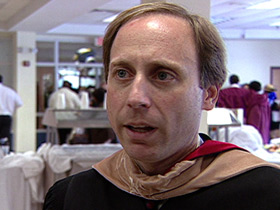 ERIC ADLER (Co-founder, SEED School): We just have to do it for more kids. We just have to. We look at the cost up front and it’s more than double the cost of day school, and we say that’s too much money to spend.

ABERNETHY: But Adler says the financial and human costs of not improving all public education are much greater.

ABERNETHY: If such a national commitment were to evolve, it would mean that access to a variety of safe, high quality public schools would not depend on money or whether a wire wheel spins out your number, but would be available to every child.

At this year’s SEED School commencement, the speaker was Alma Powell, the wife of Secretary of State Colin Powell. She told the soon-to-be college students to stay healthy, make and keep schedules and, to the young women, she advised, “Watch out for sweet-talking guys.”