In the constellation of Jewish holidays, Hanukkah is a minor festival, a late institution, one that pales in importance beside such major observances as the Day of Atonement, Sukkot, and Passover. Yet such was the significance of the Hanukkah lamp that the sages of ancient times declared the lights holy; the famous medieval rabbi Moses Maimonides urged Jews to borrow money or sell their clothing to purchase oil for the lamp; and the Jews of eighteenth-century Frankfurt, Germany, considered it one of the three essential silver objects to be given as a wedding present. Today, the celebration of Hanukkah as a time of freedom and miracles still resonates among Jews, and the tradition of kindling the festival lights on a winter’s evening continues to have great attraction and meaning. 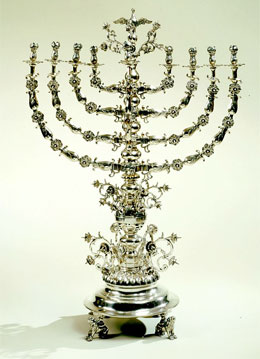 Over the centuries, the festival of Hanukkah took on different meanings for those who kindled their lamps each year. The first transformation took place in antiquity, when the explanation for celebrating an eight-day holiday shifted from events enacted by human hands, that is, the liberation and rededication of the Jerusalem Temple, to those divinely wrought, represented by the miracle of the jar of oil that burned for eight days. This change parallels the political status of Jews at the time and the major transformation that occurred in Judaism. The Romans, who ruled ancient Israel at that time, had destroyed the Jewish Temple and the sacrificial ritual that was the heart of Jewish religious observance. A new form of worship emerged that was based on the reading and study of the holy book, the Torah. Yet Jews never ceased longing for the restoration of the Temple and the redemption of Zion, and the lighting of the Hanukkah lamp became a reminder of this hoped-for event. …

Although it must have been difficult for the poorest Jews to observe the holiday, rabbinic sources were insistent that the holiday be celebrated if at all possible. The Babylonian Talmud indicates that on the Sabbath during Hanukkah, if one had enough oil for only one light at home, one should light the Sabbath lamp on Friday night since it is used to see with. However, if one had to choose between spending money on oil for the Hanukkah lamp and wine for sanctifying the Sabbath, one should buy the lamp oil. By the twelfth century, observing Hanukkah became even more important and Moses Maimonides urged that even the poorest Jews who receive charity should borrow funds or sell their clothing in order to be able to purchase oil for the lamp.

Read an excerpt about Hanukkah lights from THE BOOK OF CUSTOMS: A COMPLETE HANDBOOK FOR THE JEWISH YEAR by Scott-Martin Kosofsky (HarperSanFrancisco, 2004):

Is it the placing of the candles (or wicks in oil lamps) or the lighting of them that fulfills the mitzvah [commandment]? This was once the source of much debate until it was decided in favor of the lighting. Does one begin with all eight candles and reduce the number by one each day, as said Rabbi Shammai, or does one begin with one and add one each day, as said Rabbi Hillel? Today, we follow Hillel. 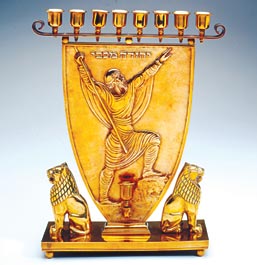 How long must the candles burn? At least one half hour is the legal opinion. What if a light goes out before the half hour, do we relight it? It is not required to do so, but it is considered a hiddur mitzvah, an “enhancement of the mitzvah,” if you do.

Do we light from left to right or the opposite? Some legal experts say that the last candle to be set should be the first ignited. The reason for this is that the last light signifies another day of miracle. Other authorities say that we should add the candles from left to right, but light them from right to left because this is the way that Hebrew is read. The second way is more common today. Do we say the blessings before the candle lighting or say one before and two after? Generally, we say them before. The blessings are as follows:

“Blessed are you, Lord our God, king of the universe, who has sanctified us with your commandments and commanded us to kindle the light of Hanukkah.”

“Blessed are you, Lord our God, king of the universe, who has performed miracles for our Fathers in olden times and in our times.”

And the Shehehiyanu, recited only on the first night:

“Blessed are you, Lord our God, king of the universe, who has given us life and sustained us and brought us to this happy season.”