BOB ABERNETHY, anchor: We want to run today a story we told before that moved us and many of our viewers. It's about the ordeal of two women, both Presbyterians, who were confronted with the same agonizing dilemma. They were pregnant with fetuses that had major defects, and each woman had to decide whether to give birth or terminate her pregnancy. Betty Rollin is the reporter.

BETTY ROLLIN: Leslie, who is from Virginia, and Mary Jo, who lives in New Jersey, have a lot in common. They are both in their mid-30s, both churchgoing Presbyterians, both married, and of course, each was happy when she first learned she was pregnant. 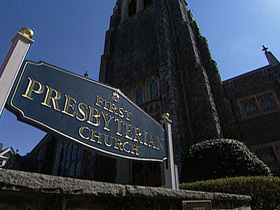 LESLIE: We were lucky we got pregnant relatively soon. We were absolutely thrilled.

ROLLIN: The two women had routine sonograms during their pregnancies. And for both, the news was a shock.

LESLIE: Everything was proceeding perfectly until about 18 weeks, when we had an ultrasound that detected severe heart defects. Three major defects and one minor defect. Any of those by itself possibly could have been reparable. But together it was very, very bleak.

MARY JO CANALES: The doctor came in and told us he could not find the nose on the baby. He couldn't see a nose. And that was basically all that he could tell us at that point.

ROLLIN: The following week, a more detailed sonogram, and more bad news for Mary Jo and her husband, John.

JOHN CANALES: He's missing a lot of the structures of his upper face, no nose, no eyelids, hole above his head, his feet are turned in. We don't know about brain damage; it's probably there, or else he wouldn't have had the clubbed feet.

ROLLIN: Both couples' doctors let them know right away that it was not too late to abort. And here their stories take different turns. 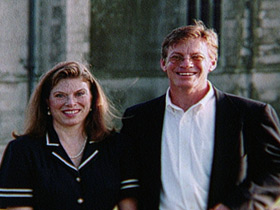 For Leslie and her husband Rob, coming to a decision was a long, agonizing struggle. She reads from the journal she kept.

LESLIE (Reading from Journal): "April 27, now we are in hell. On Friday, we had the second ultrasound and a consultation with the doctor -- the worst imaginable. Termination means having to deliver a baby at five months that's been kicking and active. Normal delivery means days to years of fragile life, hospitals, operations, and not knowing. I could write for hours about our confusion, despair, and depression; but I don't have the energy and I'm not sleeping well these days."

ROLLIN: When Mary Jo and John were given the option to abort, their decision was immediate.

(To Ms. Canales): Did you have a moment when you considered it?

Mr. CANALES: My only question was whether her life was in danger, and if it had been, we would have seriously considered the options in that regard. But when they ruled that out, there was no further question.

Ms. CANALES: We thought that was a wonderful gift from God and we just didn't want to give it up. 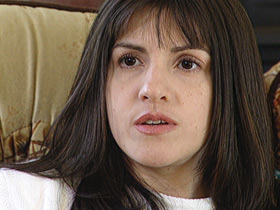 ROLLIN (To Ms. Canales): No matter what?

Ms. CANALES: No matter what. And the way I see it is when somebody gives you a gift, you don't reject it. You don't say, "No thanks."

Mr. CANALES: That's how I see God does things that we don't always understand, and in the end they can be painful, but he has a purpose in them that's even better.

ROLLIN: Leslie and her husband chose a name for their baby, Clara, but continued to question whether she should live.

LESLIE (Reading from Journal): "After five weeks of torture, agony, anger, tears, and talking about this nonstop, we decided to put an end to Clara's suffering before it got too unbearable for her and us."

I ended up concluding that God gave us brains to think about what we should do, gave us medical procedures to help us when we needed it, gave us research, gave us all kind of tools to better our lives. We felt that God gives you the strength to do what you need to do and to make decisions for yourself.

Mr. CANALES: The Bible says when we believe in God, there is a promise made to you and to your children. The Bible doesn't really talk about heaven as the place we are going ultimately. It talks about Jesus coming and re-creating this earth and these bodies, perfectly, without problem. So there is no more disease and no more conflict.

ROLLIN (To Mr. Canales): And you believe that is going to happen?

Mr. CANALES: I do believe it, and so that is what sustains us. 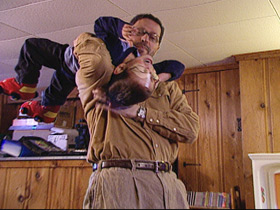 ROLLIN: Meanwhile, Mary Jo and John have a 16-month-old son, Jack. Their son, Gray, is now three and a half. Gray has had five surgeries and each day endures a painful routine.

ROLLIN: Leslie now has two healthy children, Reed and Eva, who were born after Leslie's abortion. But Clara remains a part of this family.

LESLIE: No one will ever replace her. She has her own position in the family, and the children that come after are separate in their own entity.

Mr. CANALES: He's alive. He has life. Who am I to sit here and say that quality of life is not up to some sort of speed?

ROLLIN (To Ms. Canales): Do you feel sadness sometimes, and what gets you through that?

Mr. CANALES: All the time, yes.

Ms. CANALES: Yes. I'm sad all the time when -- especially when I have to do the things that I need to do to him. I definitely don't enjoy that. But my comfort is that I know that God knows exactly what I'm going through and that He's there to sustain me and to help me go through that and to help Gray be strong in that area as well.

ROLLIN (To Leslie): Do you feel that you made the right decision? 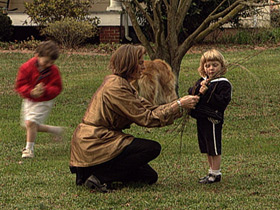 ROLLIN (To Leslie): In what sense?

LESLIE: That we made the best loving decision for her as we could at the time. And if I had to do it today, I would do the same.

ROLLIN: At one point, Leslie wrote a letter to her daughter.

LESLIE (Reading from Journal): "Dear Clara. This letter will be so hard for me to write. I hope that you forgive us for the agonizing choice that we believed was best. It is one that no parent should ever have to make. I wanted to protect you. Hold us in your wings, and when I look at the stars, I know you are with me. I love you, my dear little angel. Your mother. We will be with you soon."

Mary Jo and Leslie, both Presbyterians, were confronted with the same agonizing dilemma. They were pregnant with fetuses that had major defects, and each woman had to decide whether to give birth or terminate her pregnancy.