BOB ABERNETHY, anchor: There is an old but persistent stereotype that some religious believers are so strict and stern they have no time or taste for laughter. But we have a profile of a successful performer who thinks evangelical Christianity and standup comedy can go together -- indeed, that humor can help spread faith. His name is Brad Stine. Bob Faw of NBC News reports.

BRAD STINE (Comedian, during performance at Crossroads Community Church): The message of Jesus never changes. The messenger does, and sometimes it looks like me.

FAW: If your view of the gospels is strait-laced ... 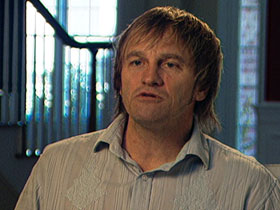 FAW: Then in-your-face comedian Brad Stine may not be your definition of a missionary, although that's precisely what Brad Stine says he is.

Mr. STINE: I'm a missionary to America, is what I said. What I'm here trying to do is to redefine what Christians look like in this country. We can be just as funny, creative, and interesting as the mainstream.

FAW: Performing during Sunday morning services in churches in this country and abroad, performing on television and on DVDs.

Mr. STINE (From DVD PUT A HELMET ON): I was in Albuquerque, New Mexico, and a church had a HARRY POTTER book burning. And I think a good rule of thumb is if Hitler tried it, maybe go another direction.

FAW: The 45-year-old Indiana native is not just looking for laughs. 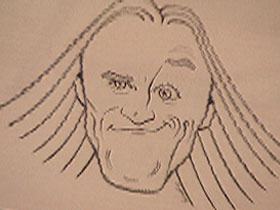 (to Mr. Stine): Right before you perform, do you pray?

FAW: Hilarity, yes. But his message is also tough-minded, and when discussing Christians he can even be belligerent.

Mr. STINE: We're people that simply want to be remembered and not marginalized, because our lineage created the United States of America. You will not be stolen from us without a fight!

FAW (to Mr. Stine): There seems to be, if not a chip on your shoulder, an attitude. How angry are you?

Mr. STINE: I'm angry enough to be passionate about what I believe.

FAW: Stine, who says he found Jesus when he was just nine years old, was heavily influenced by his church-going mother. After his parents divorced, he moved to California with his father, who sang in bands and worked in carnivals. As a teenager, to get attention Stine honed his skills as a magician. 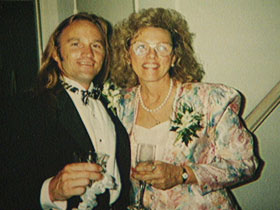 Mr. STINE (Showing card trick): Over here, of course, is the ace of diamonds, and then we reach over and find the ace of spades.

FAW: Refining both sleight-of-hand and other feats of derring-do.

FAW: For years Stine worked the nightclub circuit using magic tricks and clean jokes, even though personally he also led what he calls "the prodigal's life."

Mr. STINE: Go out and drink and smoke and carouse, and women, and so forth. That's what I did. I can relate to a flesh person. I can't relate to somebody that's perfect 'cause I'm not, and I never will be.

FAW: He was, he says, at a crossroads -- his nightclub career sputtering; one child born, another on the way -- until the day Brad Stine says he turned over his life to God.

Reverend KEVIN MYERS (Crossroads Community Church): If it does not fit your Sunday morning to laugh, then lighten up.

FAW: While some squirm at his antics or his language ...

Mr. STINE: The whole idea of the way you guys are made is completely different than men. My sister actually kicked me one time in the groin. I guess you can repeat that word in church. I don't know -- 2005 and I'm sitting here in church and going "groin" and people are going, "I don't believe you can say 'groin' in church. I don't think ..."

FAW: Most listeners are entertained, even moved.

TIM LANEY: It's just a way of showing that someone can have the faith of God and be funny at the same time. 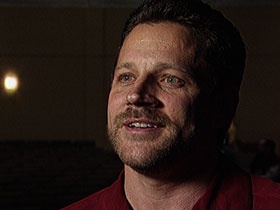 Rev. MYERS: Christ laughed. It's just normal for God to enjoy, to laugh, to have fun.

Mr. STINE: Do you want to pray so we can hear you, Maycee? Go ahead.

MAYCEE STINE: Thank you, God, for the food. Help the people that don't have toys or anything. Help them to have stuff and everything. Amen.

FAW: At home near Nashville, Tennessee, the edgy comedian now lives the comfortable life with his two children and wife, Desiree, who was raised a Catholic -- an astrology buff who met Brad when she was tending bar in Southern California.

(to Desiree Stine): Is there a sort of a pinch-me-this-really-isn't-happening feel?

DESIREE STINE: You know what? It's more of a humbling, being able to see God do things -- like things that didn't happen that we thought, you know, they're going to happen. Nothing happens, and nothing happens, and then you go, "Well, I trust God so there's a reason." And then you turn around and find out that what you thought you wanted was nothing compared to what God had for you.

FAW: Content at last, he is also hotter than ever. He's even been profiled in The New Yorker magazine. But success, says Brad Stine, will not change who he is or what he's trying to do.

Mr. STINE: God was going, you know, "Make them laugh. They need it. They hurt. There's plenty of pain to go around. Grab this while you can."

FAW: Shaking them up and bristling personally whenever he's pigeonholed and referred to as a "Christian comic."

Mr. STINE (From DVD PUT A HELMET ON): "What are you saying -- that I should just believe in Jesus so I don't go to hell? Pretty much! God bless you, everybody. Thank you."

FAW: For RELIGION AND ETHICS NEWSWEEKLY, this is Bob Faw in Brentwood, Tennessee.

There is an old but persistent stereotype that some religious believers are so strict and stern they have no time or taste for laughter. Brad Stine is a successful performer who thinks evangelical Christianity and standup comedy can go together, and that humor can help spread faith.