BOB ABERNETHY, anchor: Spirituals are the folk music first sung by Africans brought to this country as slaves. Arthur Jones is a psychologist at the University of Denver. This summer he was in Washington speaking to the Faith and Politics Institute and also, as part of a Smithsonian Institution program, visiting a Boys and Girls Club, where he taught spirituals to children who may never have heard them. Dr. Jones’ book, like the spiritual, is called WADE IN THE WATER.

Dr. ARTHUR JONES (Psychologist, University of Denver and Founder, The Spirituals Project): Spirituals are basically the earliest form of black sacred music, and these spirituals were created by African Americans who were in slavery. 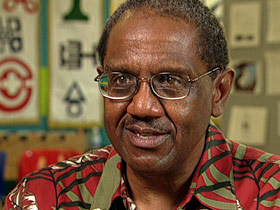 (Speaking to Young Children): The ancestors passed these songs to us. These are songs that are gifts to us today. So even though these songs were created 150 years ago, we can still use them today.

Even before large numbers of slaves converted to Christianity, they brought with them from Africa some very, very long-standing religious traditions, sacred traditions that highlighted the importance of storytelling. So even if you weren’t a Christian, you could really get a lot out of a story about a guy named Moses. So you grab that story and you use it as a basis for a song, and then you have a spiritual.

Probably any spiritual you could take and kind of mine it for the different meanings, but “Wade in the Water” is especially rich. You can talk about the fact that Harriet Tubman used the song to encourage people to wade in the water as they were escaping from slavery, to throw the bloodhounds off their scent. You can talk about it as a baptismal song. So you wade in the water — baptism by immersion. And then you have this symbolism of the waters as, basically, the spiritual force that everybody has within them so that you’re wading in the waters of your spirit.

Kids really relate to music. Blues, jazz, rhythm and blues, hip-hop, gospel music — all of those forms of music are built on the foundations of the spirituals. Just like the spirituals spoke to the slaves, rap music speaks to kids today, and we need to honor that and use that as a vehicle for teaching them about the spirituals because, in many ways, the connections are very similar. And if you teach them some of these songs, it becomes a part of what they hum and they sing.